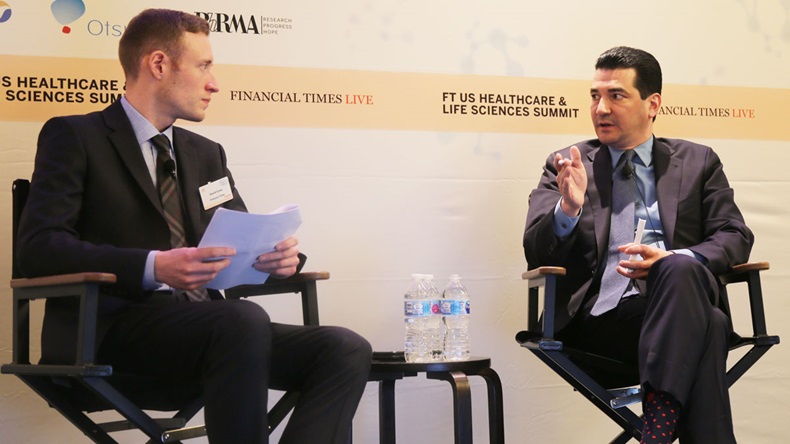 US FDA Commissioner Scott Gottlieb noted that the agency will be issuing a suite of guidances for the development of gene therapies in about six weeks.

During a keynote interview at the Financial Times US Heathcare & Life Sciences Summit in New York May 10, Gottlieb was asked what the agency is doing to spur the development of curative gene therapies. He replied that the forthcoming guidances will lay out a framework for dealing with product specific issues, as well as look at potential accelerated approval endpoints for some of the clinical settings.

Gottlieb has noted at recent events that the agency was thinking of accelerated approval for gene therapies. (Also see "Gottlieb On Gene Therapies: 'Very Seductive' To Think About Accelerated Approval Pathway" - Pink Sheet, 7 May, 2018.)

At the Financial Times meeting he elaborated on the future of gene therapy, comparing its advance to that of antibody treatments.

"I think gene therapy is going to become a backbone in drug treatment much like antibodies are now," Gottlieb said. He noted that prior to the development of fully human antibodies, antibodies were not very good drugs.

Similarly, the advent of reliable vectors is going to lead to a clinical transformation with gene therapies and they "will be the mainstay in therapy 10 years from now," he stated.

Financial Times correspondent David Crow noted that AbbVie Inc.'sHumira(adalimumab) was approved in 2002 and a biosimilar did not seem likely to be available in the US until 2023. AbbVie has reached patent litigation settlements with Amgen Inc. and Samsung Bioepis Co. Ltd.that enable them to launch their biosimilars in 2023. (Also see "The New 180 Days? Humira Biosimilar Deals Give Amgen 150-Day Jump On Samsung" - Pink Sheet, 5 Apr, 2018.) Crow asked Gottlieb what he thought about the timing.

Gottlieb said that setting aside product specific and company specific issues and issues around patents, he has been disappointed generally about the market that's been taking shape for biosimilars. He noted that there are a lot of reasons for that, including the reluctance of providers to use them.

"One of the challenges is that it's very hard for a new biosimilar to penetrate the market when it does come to market, in part because of the structure of the rebating system," Gottlieb said. He noted that even if a new biosimilar enters the market at a discount, if health plans put it on a formulary they will lose a lot of rebates from the incumbent product unless they can move the market share from the incumbent product onto the biosimilar in a significant enough  proportion to offset the rebate losses.

"The solution to that is for health plans to be able to switch more patients onto a biosimilar product," he added. But he said that until more biosimilars come to market and they have claims of interchangeabilty, health plans are going to be reluctant do that. Gottlieb noted that FDA is looking at trying to revise its guidance document on how to achieve interchangeability to see if there are ways to make the process more efficient.

Gottlieb noted last month that the agency is working on a suite of policies to try to facilitate market entry of biosimilars and is updating the guidance to try to create a lower hurdle for companies to demonstrate interchangeability. (Also see "US FDA Biosimilar Guidance Update Will Relax Interchangeability Standards" - Pink Sheet, 21 Apr, 2018.)