The geographic scope of industry sponsored clinical trial activities has gone global. Successful programs require putting all the pieces together to ensure efficient enrollment of the target patients at high quality facilities to reliably execute detailed study protocols.  Myriad differences between countries, including disease epidemiology, standard of care options, and logistical factors around medical facilities and practices, create challenges to making the right geographic choices. Is it possible to identify trial trends that can inform choices for current and future site/investigator availability for the industry? Trialtrove offers dynamic new search features, coupled with extensive dashboard displays, as tools to explore such geographic trial trends.

Beyond the US, which has been the top location for trial activity per Citeline’s annual Clinical Trial Roundup [1], the Asia and Pacific (APAC) region has been the next most active region recently.  Trial starts in the APAC region increased gradually between 2012 and 2016, followed by a sharp increase in the numbers for 2017 (Figure 1).
The top countries, shown as a percentage (%) of the total starts in Figure 1, include Japan and China at the first and second positions throughout most of this period, with Japan being eclipsed by China in 2016 and 2017. Trial starts in South Korea and Australia held steady between 2012–15, after which they tailed off, particularly for S. Korea, which dropped by ~11% between 2014 and 2017.

India (2012 and 2017) and Taiwan (2013–16) interchangeably held the fifth and sixth positions. An earlier Citeline blog provided insights into the reasons behind the drop in India trial participation [2]. That decline may have stopped by 2017, as India narrowly came back into the top 5 APAC countries. Additional color around the drivers for the uptick in China trial activity was provided last year in a Citeline blog, as well [3]. 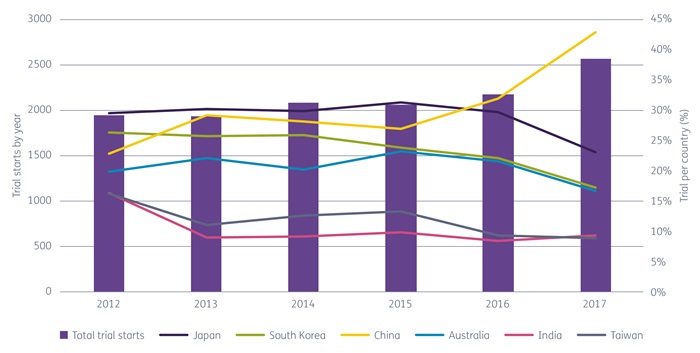 A portion of the APAC activity includes single country trials, which may reflect small trials sponsored by local companies, including generics.  The percentages (%) of such trials were explored in Table 1 and the trends observed over the past three years illustrate how China and India both have high percentages of trials localized to only their countries, with 63-90% and 69-74%, respectively.

Japan is also in that range, with over 65% single country trial starts during this period.  The other top 5 APAC countries started fewer such trials, ranging from ~40% in S. Korea to ~13% in Taiwan. Australia has historically participated in relatively few single country trials (18% in 2015), but a trend towards higher localized activity occurred in the past 3 years, with 23% in 2016 and 28% in 2017.

Thus, the overall trial starts in China and India reflect a substantial component of both solely domestic, and generics, studies. By further modifying the searches for the past 3-year trends in these three countries (data not shown), it was clear that two thirds (~66%) of single country trials in Taiwan and Australia are Phase I studies (mostly sponsored by non-top 20 sponsors, also known as “All other Pharma”), while single country trials in S. Korea are comprised of fewer Phase I studies (35%) (including both top 20 and All other Pharma sponsors).

In Eastern Europe, ~2-fold fewer trials initiated during this period than in the APAC region (Figure 2). The 6-year trends depict an undulating pattern of decreasing and increasing activity, with the reported starts for 2017 being the lowest number yet, a dip that is lower than would be expected even when accounting for reporting bias [4].
The top 5 countries in E. Europe are led by Russia and Poland, which participated in ~51–64%, and ~50%, respectively.  It is noteworthy that significant numbers of single country trials were run only in Russia.  In 2015 and 2017 that percentage was 35%, and in 2016 the percentage rose to 49% (data not shown). Within this subset of Russia-only studies, 65–68% were conducted by generics sponsors. 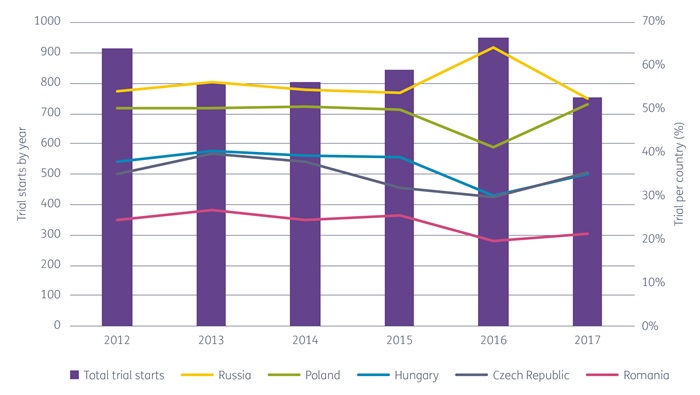 A closer look at which countries focused on single country trials reveals that only Brazil had significant activity, which generally increased within this period.  The volume of these trial starts were small compared other regions (for example, in 2015: 15 solo country trials, and 24 trials in 2017). The subset of Brazilian single country trials from generics sponsors also increased from 13% (2015) to 50% (2017).  Taken together, the top 5 S. American countries were largely participating in multinational trials during this period (data not shown).  With the decrease in recent participation of certain countries, such as Colombia, Chile and Peru, their experienced investigators could have capacity to participate in current and planned trials.

Citeline’s annual Clinical Trials Roundup analysis [1] reports that the top diseases for trial starts includes non-small cell lung cancer (NSCLC), breast cancer, and non-Hodgkin’s lymphoma (NHL).  In view of the geographic trends described above, what is the level of participation for each region in trials for these diseases? Trends could provide some clues to where experienced sites are available for upcoming and ongoing studies. Focusing only on the starts for top 20 pharma, and “All other Pharma,” sponsors (excluding generics sponsors), the regional participation trends were assessed in Table 2 to highlight increasing activity (purple) and decreasing activity (red) over these periods.
For sponsors seeking more sites for NSCLC studies, E. Europe may be the place to look with its experience in multinational studies in this indication. A quick check of Sitetrove reveals that there are 106 top tier (Tier 1) NSCLC investigators available in E. Europe as of October 2018 (data not shown). 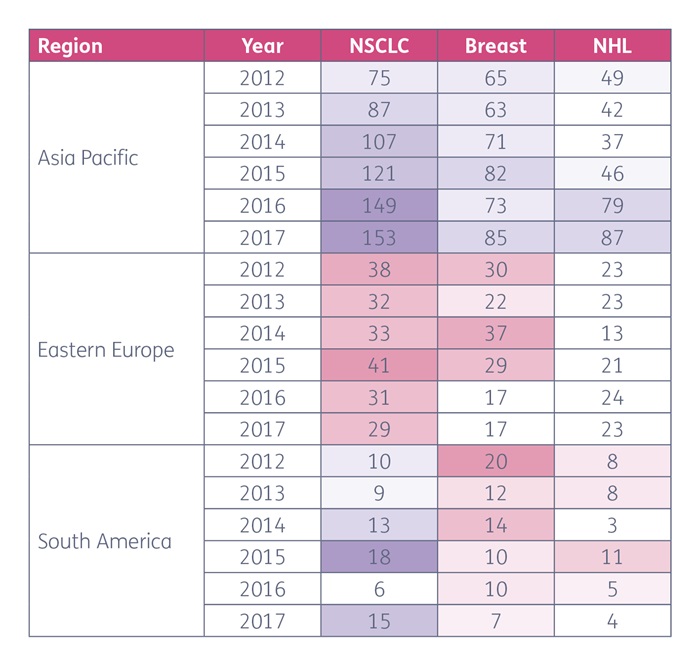 The bird’s eye view of geographic trials activity by regions is useful to see where the action has shifted over time.  However, digging down for granular details of those studies, including sponsor type and trial scope, can provide insights into countries with capacity to participate in current and upcoming trials for target disease areas. The dynamic features of Trialtrove, in conjunction with access to Sitetrove through their seamless interface, can be used, as it was here, to uncover locations where top tier sites and investigators are open for collaboration.