GSK has launched Flunase in Japan following the switch of fluticasone propionate. JSMI’s Toshi Tominaga gives his assessment of the product’s prospects as an OTC drug. 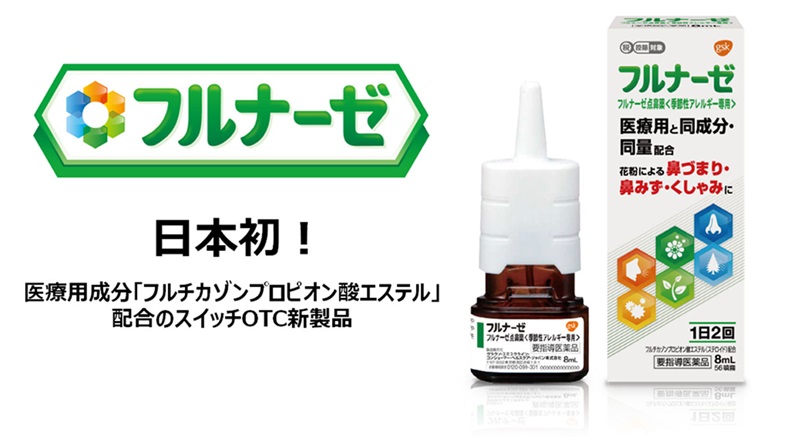 GlaxoSmithKline PLC is looking to shake up Japan’s non-prescription allergy relief category with the launch of Flunase as the first fluticasone propionate-based treatment available OTC in the country.

With the same formulation and dosage as its prescription counterpart, Flunase was indicated to treat the major symptoms of allergic rhinitis, GSK noted, including sneezing, nasal congestion and nasal discharge. The product sold by GSK under brand names such as Flonase and Pirinase is already available OTC in markets such as the US and UK.

Flunase (fluticasone propionate 50 μg/spray) is approved for OTC use in adults and children aged from 15 years with a dose of up to 8 sprays in a 24-hour period.

The product has been classified as a guidance-mandated drug, meaning that it can only be sold following a consultation with a pharmacist. GSK has been granted three years market exclusivity with the approval of Flunase.

"Flunase nasal spray supports all people who suffer from hay fever so that they can enjoy their daily life vigorously,” said GSK, which is supporting the launch with a video detailing how to use the product.

GSK is the first firm to take advantage of the switch of fluticasone propionate by Japan’s Ministry of Health, Labor and Welfare (MHLW) in February 2018. Following the ingredient’s switch, the Ministry approved GSK’s application for Flunase in April this year.

New Option For Consumers
Speaking to HBW Insight about Flunase’s prospects as an OTC product, Toshi Tominaga, senior adviser at the Japanese self-medication industry association, JSMI, said the switch would offer consumers a new alternative to existing allergy nasal sprays based on beclomethasone diproprionate, which were first reclassified as non-prescription in 2010.

“Naturally, Flunase is expected to replace OTC beclomethasone nasal sprays,” Tominaga noted. “How large Flunase’s market share is will depend on how Flunase differentiates itself from the existing steroid nasal sprays.”

However, Tominaga cautioned that the uptake of fluticasone over beclomenthasone sprays might not be as rapid as expected. As Flunase is classified as a guidance-mandated drug and only available in pharmacies, it will not be as widely accessible as the beclomenthasone-based sprays – including GSK’s own Contac nasal spray – which are classified as OTC II, permitted for sale at drugstores and through the internet.

Noting that it would be three years before Flunase could be reclassified into a lower-risk category with fewer sales restrictions, Tominaga warned the product faced an “uphill battle” to win market share.

Switch Positive For Japanese Self-Care
Despite the challenges facing Flunase, Tominaga said he very much welcomed the launch and hoped the switch of a “new and more potent steroid” as a nasal spray would “have a favorable effect on sales and stimulate patients’ will for self-care.”

While a number of options for allergy relief were already available OTC in Japan – in the form of eye drops, sprays and oral doses – there were still many other “effective ingredients” only available on prescription which were potential switch candidates, Tominaga pointed out. “If Flunase turns out to be a success, that will send ripples across the market,” he predicted.

Lamenting the fact that Japan was not known as having a progressive attitude towards switch, Tominaga said he hoped the reclassification of Flunase would “trigger chain reactions beyond the seasonal disorder category to the entire OTC market in Japan.”

Japan’s sizable “switch lag” compared to other developed countries was widening, he noted, as fewer and fewer ingredients were being reclassified.

Highlighting the switch lag, Tominaga pointed out that anti-allergy drug loratadine was only switched to OTC status in 2017 in Japan, despite being reclassified 25 years ago in Sweden.