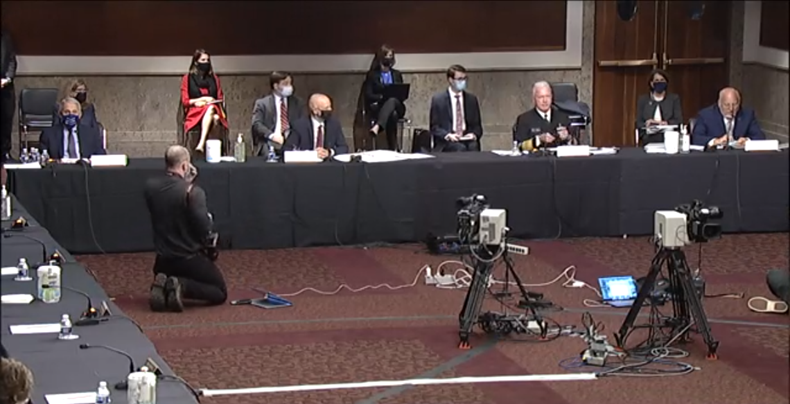 It typically takes the US Food and Drug Administration weeks to months to review a vaccine application after it is submitted to the agency, Commissioner Stephen Hahn told Senators on 23 September when asked how long it will likely take the agency to reach a decision on a COIVD-19 vaccine once an application is filed.

The admission casts further doubt on the likelihood a COVID-19 vaccine could receive an approval or emergency use authorization before the November 2020 US elections which, are five weeks away, given no company is ready to apply to the agency.

FDA already indicated earlier this month that it has stringent standards even for an emergency use authorization, including a median of two month of follow-up on study subjects – another barrier to a fall COVID-19 authorization. (Also see "US FDA Expects COVID-19 Vaccines To Meet ‘EUA Plus’ Standards, Marks Says" - Pink Sheet, 10 Sep, 2020.)

Hahn added that FDA has not made any commitment to a specific timeline for review of a COVID-19 vaccine because it will depend “on the complexity of the data” and the amount of data it receives, he said in response to questions from Sen. Mitt Romney, R-UT, at a Senate HELP Committee hearing on the federal response to the coronavirus.

“What I can tell you sir is that we do feel the urgency of the moment. We do take very seriously our responsibility to protect American lives. We will not delay, but we will not cut corners in our process,” Hahn said.

Hahn’s statements were undercut just hours later when President Donald Trump was asked at a press conference what his thoughts were about FDA reportedly considering “stricter guidelines” for an emergency use authorization of a vaccine – seemingly a reference to the new EUA guidance for COVID-19 vaccines in development.

“That sounds like a political move,” Trump added. “When you have Pfizer, Johnson & Johnson, Moderna. These great companies coming up with the vaccines. And they’ve done testing and everything else, I’m saying, why would they have to be adding these great length to the process.”

While HHS and the White House could block the guidance, FDA doesn’t have to issue a guidance on COVID-19 vaccine emergency use authorizations to hold companies to those standards. The guidance serves to aide companies and signal to the public the standards it is using.

However, its notable that the president is signaling that he might not like the standards FDA wants to use and it could be a sign he would push his Health and Human Services Secretary to overrule an EUA decision if he felt it was based on too strict criteria.

There has been some confusion and back and forth from the agency as to whether specific applications would go before the Vaccines and Related Biologic Products Advisory Committee. Lawmakers and public health experts have pushed for the meetings to lend credibility and transparency to the FDA process, particularly given the rise in American’s vaccine hesitancy and concerns about political interference with scientific agencies.

US National Institute of Allergy and Infectious Disease Director Anthony Fauci told the Senate committee that the FDA advisory committee’s review of applications and the public presentation of data that comes along with the meetings are two key reasons to have confidence in FDA’s process.

“Not only do you have a very qualified advisory committee in VRBAC, but you also have the entire scientific community that is going to be scrutinizing this because it will be made public. And for that reason I have confidence in the process,” Fauci said.

Sponsors in Control of Application Timing

Much of the hearing was focused on Senators concerns around Trump officials’ involvement with public health agencies during COVID-19.

But he tried to proactively defend the agency in his opening remarks to the committee, stressing that all decisions have been made by career scientists based on data and not by politicians and arguing that public scrutiny of FDA is par for the course because of their mission. He argued the criticism shouldn’t lead to a loss of confidence in the agency.

“Of course our work on COVID-19 and non-COVID issues comes with unprecedented public scrutiny and sometimes criticism. Any agency that has the broad responsibilities and far reaching impact of FDA, particularly issues of public health, can’t expect to do its job without inviting controversy and disagreement.  But it’s also essential that the criticism we get never shapes the underlying faith that the public has and should have in FDA and our commitment to protecting the public health.”

Hahn also made clear that sponsors will decide whether to submit applications for COVID-19 to FDA, perhaps allaying concerns that politicians could push for approval over a company’s objections. (Also see "Could A COVID-19 Vaccine Gain EUA Without Sponsor Cooperation?" - Pink Sheet, 22 Sep, 2020.)

“It is incredibly alarming that this administration has undermined public trust in the work of your agency by spreading conspiracies and pressuring the agency to ignore the science,” Sen. Patty Murray, D-WA, said.

Murray described Health and Human Services Secretary Alex Azar’s recent decision to require all FDA rules get his final sign off as “an alarming power grab from a political appointee to make the middle of a pandemic.” (Also see "Gottlieb vs Azar vs Califf vs Gottlieb: The Public Fight Over How The US FDA Should Operate" - Pink Sheet, 21 Sep, 2020.)

He argued that FDA remains the “gold standard” and that one of the reasons for this is that unlike other regulatory agencies it looks at primary data, saying that this is what its scientists did with convalescent plasma and the emergency use authorization for Gilead’s remdesivir.

But that doesn’t address the criticism that, the primary data FDA looked at might not have been ideal or ripe for clearance. The convalescent plasma EUA, for example, was granted based on an analysis of expanded access data, not a randomized controlled trial.

Hahn avoided a bloodbath at the hearing, though, perhaps largely because he shared the socially distant witness table with three other top government health officials, including Centers for Disease Control and Prevention Director Robert Redfield, whose agency’s political scandals were more recent and fresher in the minds of some lawmakers.

And Hahn seems as though he will steer clear of any other in-person Senate scrutiny this year. HELP Chairman Lamar Alexander, R-TN, said the hearing was likely the last of 2020 – and thus of Alexander’s career, since he is not running for reelection.