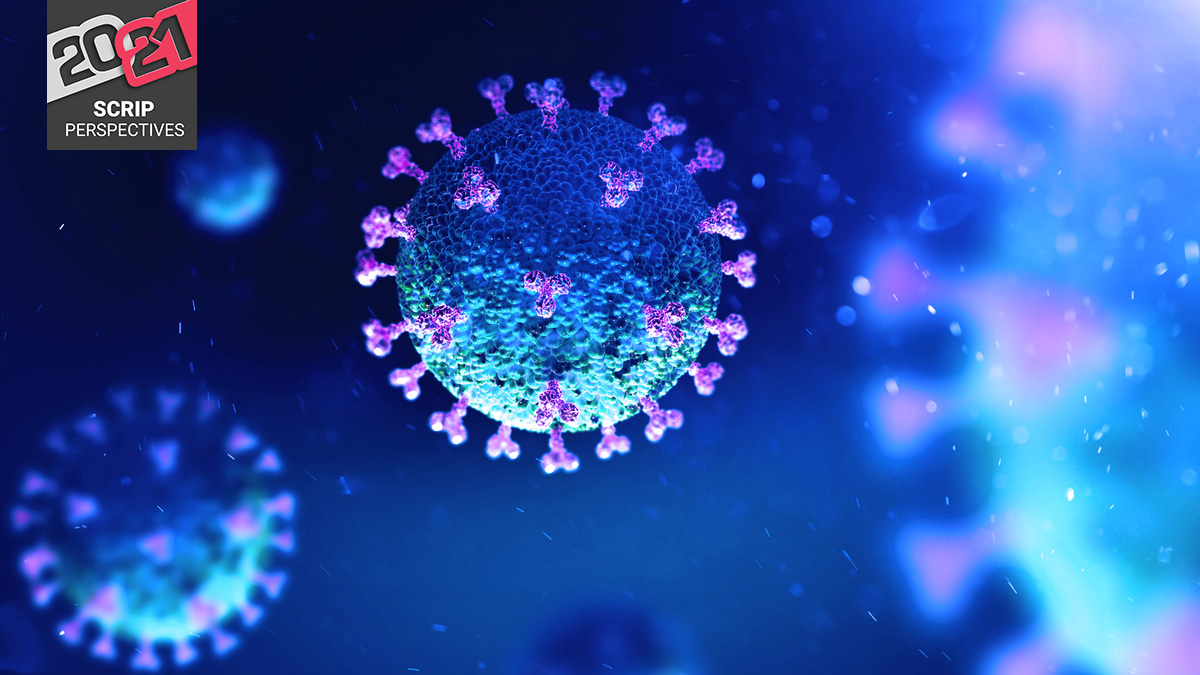 The COVID-19 pandemic was a defining moment for the biopharmaceutical industry.

The annus horribilis that was 2020 ends on a far more hopeful note than it began, with two vaccines against COVID-19 receiving emergency use authorizations from the US Food and Drug Administration and several drug treatments available for those already infected with a virus that has robbed the world of more than 1.5 million lives, sickened millions more and caused economic devastation on a scale unseen since the Great Depression.

The biopharmaceutical industry quickly rose to the challenge of combatting COVID-19, with a full pipeline of vaccines and therapeutics within months. The industry has nevertheless not been immune to the coronavirus’ devastating march across the world: one of the largest US biotech companies was host to an early superspreader event, clinical development plans had to be put on hold and everything from day-to-day work to massive conferences had to take place online.

But biopharma has largely adapted. And since those early efforts to combat the virus were announced, the year has seen drugs and vaccines developed and authorized by regulators with unprecedented speed.

Drugs developed to fight COVID-19 have included investigational medicines developed for other diseases, shelved away and then dusted off for repurposing; branded and generic drugs already on the market; and entirely novel medicines developed specifically for the coronavirus and its symptoms. Some have proven successful, while some have shown more limited efficacy and some have been duds.

Meanwhile, vaccines progressed relying on well-established technologies like recombinant DNA, but also using new technology, like messenger RNA that was being developed as a faster methodology for vaccines – which the pandemic experience has now validated.

Although 2021 hasn’t proven to be an annus mirabilis yet – with the pandemic still raging – its start stands in stark contrast to the beginning of 2020, when the first COVID-19 outbreak was underway in Wuhan, China, followed by its first official appearance in the US on 19 January 2020.

The Race For A Vaccine

By the time SARS-CoV-2 was reported in the US, scientists in China had already obtained and released the genome of virus. And eight days after its official 19 January arrival in the US, Paul Stoffels, chief scientific officer of Johnson & Johnson, announced that the company was confident that within eight to 12 months, it could develop a vaccine and make it available at scale. ()

Other players quickly followed, in the US and abroad.

In other words, a process that would ordinarily take years wound up being whittled down to a matter of months.

“The vaccines have been developed with unprecedented speed, and this reflects remarkable scientific advances, which allowed investigators to complete high-quality studies in months instead of years, as before,” Thomas File, chair of the infectious disease program at Summa Health in Akron, OH, told Scrip.

On 18 February, French drug maker Sanofi – one of the four largest vaccine makers, alongside J&J, Pfizer Inc. and Merck & Co., Inc. – said it had partnered with the Biomedical Advanced Research and Development Agency (BARDA) to develop a candidate using the same recombinant DNA technology as its Flublok flu vaccine. () Pfizer soon entered the ring as well, partnering in March with Germany’s BioNTech SE to develop the latter’s vaccine candidates. ()

And on 30 April, AstraZeneca PLC and the University of Oxford announced a deal to develop the university’s adenoviral vector vaccine, ChAdOx1 nCoV-19, soon thereafter renamed AZD1222. ()

The proposition of faster vaccine development with an mRNA technology platform was borne out with both Moderna’s mRNA-1273 and Pfizer/BioNTech’s BNT162b2. On 2 December, the UK became the first Western country to authorize a vaccine as it gave the go-ahead to BNT162b2. An FDA emergency use authorization followed nine days later, with Moderna’s vaccine gaining an EUA on 18 December. ()

Although there have been incidents of health care workers receiving BNT162b2 experiencing severe allergic reactions – including some without a history of them – File said that the speed of the studies that have led to their authorization did not compromise safety.

“It’s very important to know there was no cutting corners in this development,” File said. “This rapid development did not compromise the safety of the vaccine or reduce the scientific reliability of the process.”

Naturally, however, not everything has gone according to plan.

The Russian government named its vaccine “Sputnik V,” after the Soviet satellite that became the first human-made object launched into space, and it sought to achieve the same by issuing the first authorization for a COVID-19 vaccine, in August, when it had scarcely even entered the clinic. ()

AstraZeneca is banking on authorizations from regulators in the UK, European Union and India for AZD1222, based on its presumption that shortcomings in the data make it unlikely the FDA will give it the green light. () The UK granted temporary authorization on 30 December. ()

And compared with Pfizer/BioNTech and Moderna’s success, Sanofi and GlaxoSmithKline plc plan to delay initiation of the Phase III study of their vaccine after Phase I/II data showed a disappointingly low immune response. ()

Drugs for patients already infected with COVID-19 have included repurposed branded and generic drugs as well as novel agents for combatting the virus itself or treating COVID-19 symptoms, which in aggregate have yielded much more mixed results than for vaccines. Results have ranged from highly successful to mildly successful and from unsuccessful to becoming a political football.

Development of Gilead Sciences, Inc.’s Veklury (remdesivir) – a drug the company originally developed for Ebola virus and that subsequently showed promise in preclinical testing as a treatment for SARS-CoV-1 and MERS-CoV – began with a study that initiated in February in Wuhan. ()

A subsequent Phase III randomized trial sponsored by the National Institute of Allergy and Infectious Diseases (NIAID) in the US showed a statistically significant improvement in length of time to recovery for patients who received Veklury compared with those on placebo, and the drug quickly received an EUA from the FDA in May. () Full approval was granted in October. ()

But Veklury has run into problems too. In late November, the World Health Organization recommended against administration in hospitalized patients, saying there was insufficient data to support its use in certain patient groups. () And the European Union has sought to clarify that the drug’s indication for use in patients requiring oxygen support exclude those requiring invasive ventilation. ()

More novel antiviral treatments have subsequently entered the market as well, including Eli Lilly and Company’s bamlanivimab and Regeneron Pharmaceuticals, Inc.’s casirivimab/imdevimab, which received EUAs on 9 November and 21 November, respectively. ()

Drugs for treating the hyperactive inflammation responsible for much of the morbidity associated with COVID-19 have not had as much luck, with notable exceptions like the generic steroid dexamethasone and, more recently, Lilly’s JAK inhibitor baricitinib. But while successful at treating cytokine release syndrome in patients receiving CAR-T cell therapies, Roche Holding AG’s IL-6 inhibitor Actemra (tocilizumab) has not been effective in treating similar symptoms in COVID-19. The same has been true of Regeneron’s and Sanofi’s IL-6 inhibitor Kevzara (sarilumab).

Then there was hydroxychloroquine and its close relative, chloroquine. While preclinical data indicated the two drugs – widely used to treat malaria and certain autoimmune diseases – might be effective in treating COVID-19, they quickly became a cautionary tale of the dangers of letting politics meddle with science. An EUA granted to the drugs on 28 March was revoked on 15 June as a growing pile of evidence showed the drugs to be ineffective. ()

As with many industries, biopharma encountered significant disruption due to COVID-19, particularly in clinical development. A positive side effect was that the pandemic accelerated the embrace of virtual trials and related technologies like remote monitoring and consenting. () But many companies were forced to scale back or delay development plans for fear of endangering participants. ()

And naturally, the industry’s annual conference circuit was similarly disrupted.

In hindsight, it might be sheer luck that the 2020 JP Morgan Healthcare Conference – with more than 9,000 attendees crammed into San Francisco’s Westin St. Francis Hotel – didn’t become a superspreader event. But COVID-19 and its recent emergence in the US was already the talk of the town at another major industry event that soon followed, the BIO CEO & Investor Conference, which took place in February in New York. About a month later, the entire state of New York shut down as the city became the nation’s first major epicenter of the virus’ spread.

The biotech industry also became the focus of an early superspreader event, namely an international meeting of executives from Biogen, Inc. that took place 24-27 February at a hotel in Boston. Infected executives subsequently attended a 2-4 March industry conference sponsored by Cowen, which further facilitated the outbreak. ()

A 6 March article in the Boston Business Journal reported that up to 175 people may have come into contact with infected Biogen employees. But a study published on 9 December in Science linked the Biogen conference to as many as 300,000 cases.

“Tremendous progress has been made since the start of the pandemic to gain a better understanding of the novel virus and its transmission, develop vaccines and investigate potential treatment options,” Biogen told Scrip. “As a company rooted in science, we understand the value of the data that came from the first wave of the pandemic in the Boston area, and we hope that information gleaned from these data will help continue to drive a better understanding of the transmission of this virus and efforts to address it.”

Other conferences were postponed or canceled, and soon the circuit of medical, financial and business meetings pivoted to virtual sessions – including the upcoming JP Morgan conference in January – which will continue to be the case until the pandemic is brought to heel.