Have you accepted the #icebucketchallenge for ALS

The idea is simple, you get nominated and either film yourself dumping a bucket of ice water over your head or reject the offer and make a donation to the ALS Association. This exploding social media sensation is bringing enormous attention to the debilitating neurodegenerative disease amyotrophic lateral sclerosis or ALS.

The challenge got started back in July by Pete Frates, a former Boston College baseball player who was diagnosed with ALS in 2012. Frates, 29, is now paralyzed, eats through a feeding tube and cannot talk. These symptoms are typical of ALS and the life expectancy of a patient once diagnosed is a mere 1,000 days. With no cure and the only approved therapy doing little to stop disease progression there is a desperate need for new treatment options.

With this heightened awareness for ALS, Citeline thought it would be interesting to take a quick look at the therapies which are currently in development. 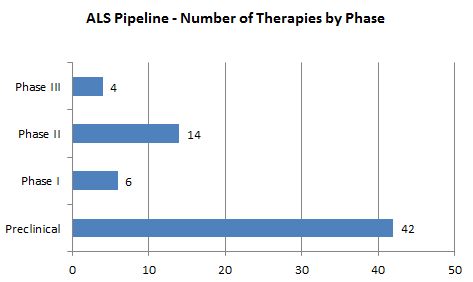 Data from Pharmaprojects shows there a promising number of therapies in the pipeline for ALS, including 4 compounds that have reached the final stages of clinical testing and as many as 14 already in Phase II. With over 40 products in preclinical development it is likely that we will see many more drugs moving into the clinic in the next five years.

Unusually for a rare disease, a wide range of therapeutic approaches are being developed and these include small molecules which target protein aggregation, anti-inflammatory agents, immunomodulators and stem cell transplants. Gene therapy approaches are also being developed as a way to provide delivery of supportive molecules called trophic factors to damaged neurons.

However, despite this promise, better understanding of the disease process is crucial if we are to design new therapeutics that will halt the degeneration of the nervous system in this relentless disease.  So to help raise awareness for ALS here at Citeline we dare you to accept the #icebucketchallenge, just like our very own CEO Linda Blackerby.