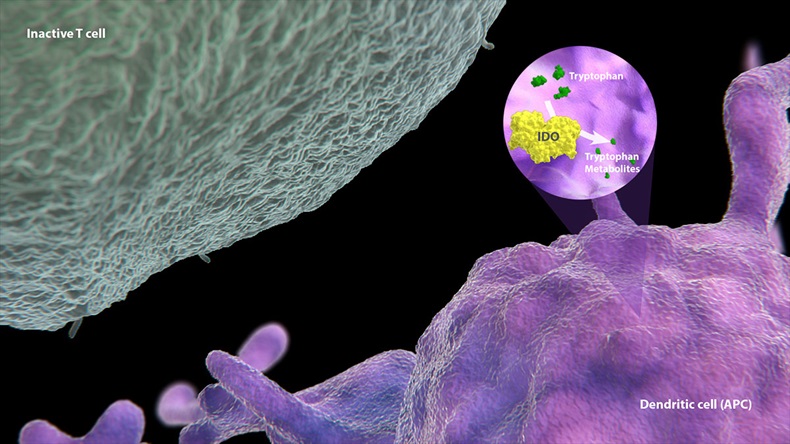 New early data on IDO inhibitors from NewLink Genetics Corp. and Bristol-Myers Squibb Co. reinforce the image of the class as a safe combination partner that can enhance efficacy of PD-1 inhibitors in cancer treatment.

PD-1 immunotherapy has had an enormous impact, but only about one-third of cancer patients respond to the drugs as single agents and some tumor types don't respond at all. Bristol has invested heavily in the combination of its PD-1 inhibitor Opdivo (nivolumab) in combination with its CTLA-4 inhibitor Yervoy (ipilimumab), which is already approved for melanoma with development ongoing in multiple tumor types, but Yervoy is associated with severe toxicities.

Inhibitors of indoleamine 2,3-dioxygenase 1 (IDO1) have emerged at the head of the next wave of immuno-oncology, especially because of their potential to be successfully paired with PD-1 inhibitors.

"We are still waiting for the big wave to break in terms of novel combinations. The vast majority of combinations being investigated in trials currently in the immuno-oncology space are PD-1 antibody based," commented Keith Flaherty, director of developmental therapeutics at Massachusetts General Hospital, in an interview at the American Association for Cancer Research (AACR) meeting.

Data for two other IDO inhibitors – NewLink's indoximod and Bristol's BMY-986205, which was acquired from Flexus Biosciences Inc. –were presented on April 4 at the AACR meeting in Washington D.C. and give the class even more momentum.

Indoximod is in Phase I or I/II for melanoma, brain cancer, breast cancer, pancreatic cancer and acute myeloid leukemia.

The most common adverse events were fatigue, headache and nausea. Importantly, investigators reported that the rate of severe adverse events was very low in the study, with only 3 (5%) Grade 3 events (see table below).

That next trial will be essential confirmation of these early signals. Commenting on the IDO data in an interview at the AACR meeting, Mass General's Flaherty cautioned that "judging provisional promising results for several dozen patients can be a hazardous enterprise." A signal could be missed or conversely, there could be an "erratic overestimation of efficacy," and it is important to have larger numbers of patients treated and randomized data to have confidence, he added.

On the other hand, the data, though uncontrolled, reinforce the idea that this is a uniquely promising combination that continues to produce results that are above expectations for PD-1 antibodies alone, Flaherty said. Furthermore, he said, the IDO class looks very clean on safety and any augmentation in efficacy would be "pure upside."

The market reacted to the data differently, sending the NewLink stock down by 10% to a close of $20.79, presumably due to comparison with a very small combination study of Merck's epacadostat. Merck announced in October 2016 that in the Phase I ECHO-202 study of epacadostat twice daily with Keytruda in 19 melanoma patients, the objective response rate was 58% and the complete response rate was 26%. Previously, in June 2014, the combination of epacadostat with Yervoy demonstrated an ORR of 41.7% and a CR of 8.3% in a Phase I/II study of 12 melanoma patients. (Also see "ASCO Immunotherapy Alert: BioMedTracker’s Top Abstract Picks" - Pink Sheet, 19 May, 2014.)

The early toxicity profile of indoximod/Keytruda compares favorably to that of Bristol's Yervoy/Opdivo combination in the same indication. In updated results from the CheckMate 067 study in frontline melanoma presented at the AACR meeting on April 3, the Yervoy/Opdivo combo was associated with a 58.5% rate of Grade 3/4 adverse events compared to 21% for Opdivo alone.

Flaherty believes that the severe toxicities and modest efficacy – the combination's 64% two-year survival rate in CheckMate 067 wasn't much higher than Opdivo alone at 59% – mean that the Yervoy/Opdivo combination is a less attractive treatment option and that melanoma patients may opt for Opdivo monotherapy or a trial of a novel combination including a PD-1 therapy instead. (Also see "Bristol's CheckMate 067 Revives Debate On Rationing Yervoy/Opdivo Combo" - Scrip, 3 Apr, 2017.)

The most important test for the combination will be lung cancer, where Bristol has fallen behind Merck's Keytruda/chemo combo. (Also see "Bristol Falls Further Behind Merck In NSCLC By Pulling Early Combo Filing" - Scrip, 20 Jan, 2017.)

The Opdivo/Yervoy combination also saw a setback with the failure of the failure of the CheckMate 143 study, announced April 3, which tested the duo against Roche's Avastin (bevacizumab) in glioblastoma, a notoriously difficult tumor type. (Also see "Can Checkpoint Inhibitors Jump-Start Glioblastoma Drug Development?" - Pink Sheet, 23 May, 2016.) Results will be presented at the World Federation of Neuro-Oncology Societies meeting in Zurich on May 7.

While heavily invested in the combination of Opdivo and Yervoy, Bristol has also been exploring many other targets, including IDO, having obtained an IDO development program through the acquisition of Flexus for $800m upfront in February 2015. (Also see "Flexus flips IDO inhibitors to Bristol-Myers for up to $1.25bn" - Scrip, 24 Feb, 2015.)

The University of Toronto's Lillian Siu reported that the drug was well tolerated when tested as a monotherapy and in combination with Opdivo (see table). The most common ttreatment-related adverse events included decreased appetite and diarrhea.

In an April 4 note, Barclays analyst Geoffrey Meacham described Bristol's pharmacodynamic and safety data as promising, "albeit in populations less likely to be clinically responsive initially."

The Phase I/IIa data for '205 as a monotherapy and in combination with Opdivo appear good overall up through the 200 mg dose, granted the number of evaluable patients was small for each dose, Meacham commented.

The company noted that the IDO1 inhibitor is one of 21 oncology compounds in clinical development and that the company is studying combinations across multiple tumors. "We continue to be committed to the Opdivo/Yervoy combination, and our work to develop IDO adds an additional novel mechanism to potentially help patients with unmet need," Bristol told Scrip.

Bristol has also been teaming up with Incyte to test Opdivo with the IDO inhibitor epacadostat. On April 2, the companies announced an expansion of their partnership, with plans to launch two new registrational studies of the Opdivo/epacadostat combination – one in first-line non-small cell lung cancer (all levels of PD-L1 expression) and one in first-line head and neck cancer. (Also see "Deal Watch: Merck, Incyte Double Down On Keytruda/Epacadostat Collaboration" - Scrip, 31 Mar, 2017.) The companies are also planning to add relapsed refractory melanoma cohorts to a Phase I/II study of epacadostat and Opdivo.

"While ’205 generally showed the desired characteristics, we see the commercial logic behind the decision to proceed into Phase III with Incyte’s epcadostat as the dose escalation and expansion studies for ’205 remain ongoing," Barclays Meacham commented.

The expansion of Bristol and Incyte's partnership followed on the heels of a March 31 announcement by Merck and Incyte to start registrational studies in new tumor types. The announcement clarified that in addition to melanoma, Merck and Incyte are planning six additional pivotal trials, two in non-small cell lung cancer, one in first-line kidney cancer, one in squamous cell cancer of the head and neck and two in bladder cancer (first-line and second-line).