If You Build It, They Will Come: FDAer Says Pre-Cert Program Getting Global Attention, AI Paper Just the Start 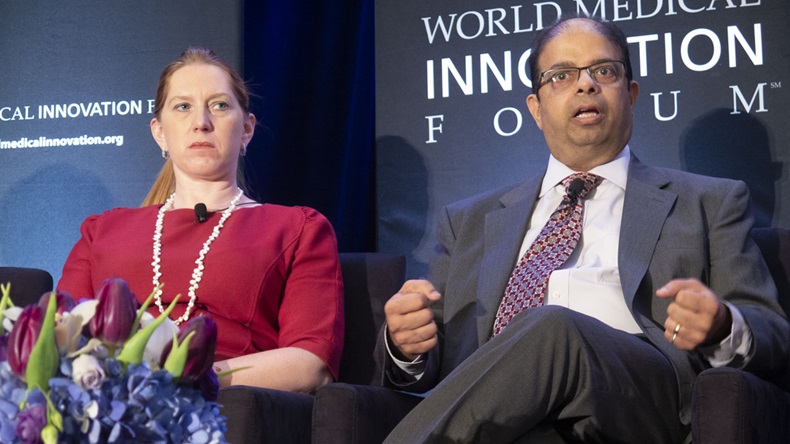 Regulators around the world are watching what the US FDA is doing to build a new pathway for software as a medical device (SaMD), according to Bakul Patel, associate director of digital health at the agency's Center for Devices and Radiological Health. He also says the recent discussion paper on artificial intelligence is not the be all and end all before the agency develops a draft guidance on the topic.

During a panel discussion at the 2019 World Medical Innovation Forum in Boston, Patel noted he and other international regulators have been working for the past five years to develop a broad framework and definition for SaMD.

“I’m actually hopeful with the results of this program – if we were to try it out and be successful, others will follow. I say that because I get phone calls and emails from my international colleagues.” – Bakul Patel

“Can this approach be applicable in other countries? I believe it can be, but we have to prove it first here before we sit down and figure out what [international] harmonization is going to look like,” he said. “I’m actually hopeful with the results of this program – if we were to try it out and be successful, others will follow. I say that because I get phone calls and emails from my international colleagues.”

After his talk, Patel spoke with Medtech Insight to elaborate on his points.

Patel has been talking to regulators from Canada, Singapore and Japan that are interested in the agency’s pre-cert pilot program. He noted that other countries such as Brazil are using frameworks already built into the International Medical Device Regulators Forum (IMDRF) for direction on digital health, and some regulators have directly broached the topic with companies enrolled in the pilot.

"There are a lot of people who have been observing what we're doing,” Patel said. “[Other regulators] may be still trying to figure out how to translate it into their laws or legal structure, but everybody is very interested. At least that's what's the impression I get."

"Everybody's curious because we're moving so quickly,” he added, noting that regulators in other jurisdictions seem to be interested in the FDA’s work because they, too, are seeing an explosion of SaMDs in their own countries.

Patel first widely proposed the idea of a pre-cert program at the Digital Medtech Conference in San Francisco in 2017. Since then the idea has gathered significant momentum and feedback from industry, and has resulted in the pilot program to evaluate the new pathway, which includes participants such asApple Inc., Verily Life Sciences LLC, Roche and Tidepool. (Also see "Software Fast Track? US FDA Asks Developers To Envision 'Precheck' Program" - Medtech Insight, 9 Mar, 2017.) and (Also see "'Excellence' In Health-Software Design: US FDA Taps Nine Firms To Figure Out What That Means" - Medtech Insight, 26 Sep, 2017.)

Since the announcement, the FDA has also released a number of evolving documents to gauge industry feedback including a working model, a test plan and a regulatory framework. (Also see "2019 Will Be Testing Period For US FDA's Novel Pre-Cert Paradigm For Digital Health " - Medtech Insight, 8 Jan, 2019.)

The program has been running for well over a year, but Patel and his team are just getting ready to start their appraisals of the pilot participants. He says they are in the process of developing a plan to start doing those appraisals and learn from anyde novos that result from the pilot.

The appraisals will include reviewing thede novo submissions from the pilot programs, and the agency hopes to share its findings along the way.

Patel says he hopes to release an update on the pilot around midyear but couldn’t be more specific.

“We don’t want to do it bounded by a time because we want enough information to share so that we can actually say, 'This is what we learned,'” he said. “So, by doing and learning where we tweak and don’t tweak, what worked [and] what didn’t work, is really what we want to do to test the midyear update. 'Midyear' could be June, July.”

The directive Patel issued to his pre-cert team is to ensure they have enough substance in their appraisals that they can share publicly, and that will help stakeholders believe that the agency is being transparent. He says the agency has tried to keep stakeholders as informed as possible over the past few years to create a feedback loop that can help the agency develop the new pathway.

“Look at what we have so far and don’t wait for us to tell you what we’ve come up with.” – Bakul Patel

“My hope is [by midyear] we have at least a few appraisals under our belt [and] at least a couple of submissions that we can do,” Patel said. “I don’t know how many of them we can do, but that’s the goal.”

So far, he says industry has been very good at offering feedback, and he asks stakeholders continue to be engaged.

“Look at what we have so far and don’t wait for us to tell you what we’ve come up with,” Patel said.

The FDA has already provided an ample amount of details in their working model, according to Patel, and he wants companies to come back to the agency with comments on how the model as it’s laid out impacts their work. During the panel he noted that the pilot program includes only nine participants – which isn’t a very large sample to observe – and would like to see more engagement from industry.

Patel encourages companies to put themselves in the FDA’s shoes to gain a better understanding of the kinds of answers and information it needs to ensure there’s enough confidence to get their products to market.

Last week, the FDA released a discussion paper on artificial intelligence that is meant spur discussion in the health-care industry and help the agency in its efforts to develop a draft guidance on the topic. The FDA is hoping to get feedback on the paper in June. (Also see "Rise Of The Machines: FDA Artificial Intelligence Guidance Is Coming" - Medtech Insight, 2 Apr, 2019.)

During the panel discussion, however, Patel noted there will likely have to be a number of things that need to happen between the time the FDA reads all the comments from the discussion paper and when it is able to issue a draft guidance on the topic.

“If we prepare ourselves, we can reap the benefits.” – Bakul Patel

He clarified those comments toMedtech Insight: “The entire discussion paper isn’t just going to get turned into a draft guidance. That would be a dream. But I also see a role for industry to play from a standards organization perspective. Roles for science to evolve.”

For example, he says industry may need to come up with standards on how data partitioning is meant to be addressed with AI-based products, noting that such issues are more in the science realm rather than the regulatory arena.

Asked if the FDA may consider holding a workshop after the discussion paper deadline to bring stakeholders together and discuss key issues, Patel said holding workshops are a “heavy lift” for an agency with limited resources. Instead, he encourages the stakeholders themselves to spur discussions amongst themselves, to then share answers to with the FDA.

“I think there’s so many things the community can start helping with as well,” Patel said. “Having a workshop on what is good practices for machine learning would be a low-hanging fruit.”

He says trying to get consensus inside the industry would go a long way, and even if the solutions aren’t perfect they at least would get conversations started, which is ultimately the main goal of the discussion paper.

From the FDA’s perspective, Patel says it's trying to be “responsible” as a regulator in a “fast-moving, emerging, yet very promising field.”