IL-6: Vying for a Sliver of the Rheumatoid Arthritis Pie

TNF antagonists have played a major role in rheumatoid arthritis (RA) prescribing trends, even helping to make adalimumab (Humira) and etanercept (Enbrel) rank among the top selling products.[1] Despite their success, a number of patients are intolerant or have an inadequate or inappropriate response (IR) to these products. [2] This treatment gap has lent itself to a new class of biologics, the IL-6 antagonists, with tocilizumab (RoActemra/Actemra) paving the way by gaining first approval.[3] The next to follow suit, two additional BLAs for anti-IL-6 biologics, sarilumab and sirukumab, have recently been submitted to the US FDA. Comparing the results and distinctions in global Phase III trials between these biologics may foreshadow the success of these newest IL-6 antagonists on the market.

Using Trialtrove data, some direct clinical program comparisons can be made between Sanofi and Regeneron’s sarilumab and GlaxoSmithKline and Johnson & Johnson’s sirukumab. One notable difference among the anti-IL-6 biologics are their dosing frequencies. With tocilizumab, patients may be dosed every other week (Q2W), but this is increased to a weekly dose as needed.[4] Sarilumab used every other week dosing in pivotal trials while the low dose of sirukumab had patients receiving the drug every four weeks (Q4W). Sirukumab is also distinguished via its specific mechanism, targeting the IL-6 cytokine rather than the receptor.

The timeline in Figure 1 shows the Phase III sirukumab and sarilumab trials that started in the past five years (excluding terminated or single-country trials). Other Phase II/III or Phase III trials not depicted in the timeline include sarilumab’s SARIL-RA-MOBILITY trial and SARIL-RA-EXTEND extension study since they both started in 2010. Sanofi and Regeneron reported that sarilumab met all three co-primary endpoints on the 150 mg Q2W and 200 mg Q2W doses in the SARIL-RA-MOBILITY trial, which enrolled methotrexate (MTX) IR patients. These primary endpoints included American College of Rheumatology score of 20% improvement (ACR20) at 24 weeks, Health Assessment Questionnaire - Disability Index (HAQ-DI) at 16 weeks, and change in modified Sharp/van der Heijde score (SHS) at week 52.[5] Positive results from ACR20, HAQ-DI, and SHS demonstrate an improvement in signs and symptoms of RA, physical function, and radiographic progression, respectively. In the SIRROUND-D trial, which enrolled DMARD IR patients, both sirukumab doses, 50 mg Q4W and 100 mg Q2W, showed significant improvement over placebo on ACR20 at 16 weeks and in SHS at week 52.

Figure 1. Sarilumab and sirukumab Phase III rheumatoid arthritis trials that have started in the past five years (excluding terminated or single-country trials)

Table 1 compares two trials that enrolled anti-TNF IR patients, SIRROUND-T and SARIL-RA-TARGET. Each study showed that sirukumab and sarilumab did significantly better on ACR20 at 16 weeks and 24 weeks, respectively. They also show that both low and high doses of each drug did better than placebo on ACR50 (ACR score of 50% improvement), HAQ-DI, and Disease Activity Score 28 using C‐reactive protein (DAS28-CRP). Although sarilumab seemed to have a numerically greater effect than sirukumab on the outcomes listed in Table 1, the SARIL-RA-TARGET trial also had a greater placebo effect on all but the DAS28-CRP remission measure. 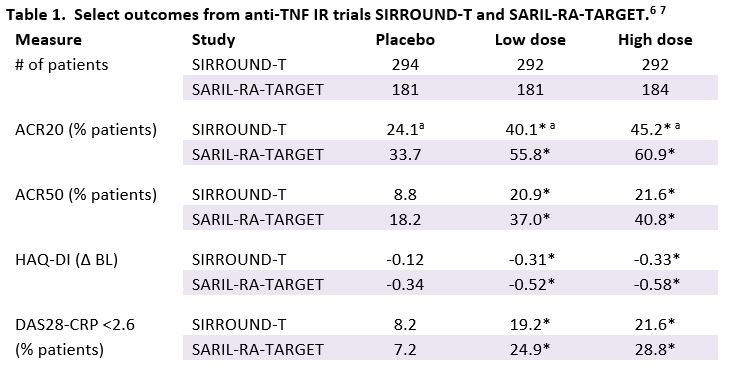 Both sarilumab and sirukumab drug programs included monotherapy comparator trials, against adalimumab, that enrolled MTX IR patients: SARIL-RA-MONARCH and SIRROUND-H. As depicted in Table 2, the SARIL-RA-MONARCH trial showed that sarilumab 200 mg Q2W was superior to the TNF antagonist on the primary endpoint of DAS28 using erythrocyte sedimentation rate (ESR) at week 24. Likewise, recent results from the SIRROUND-H trial demonstrated that both doses of sirukumab did significantly better than adalimumab on its co-primary endpoint, DAS28-ESR in the same timeframe. Again, like in the placebo-controlled anti-TNF IR trials, sarilumab had a greater effect than even the high dose of sirukumab on ACR20 and, this time, also on improvement in DAS28-ESR. Interestingly, both the low and high doses had a greater effect on the ACR50 outcome in SIRROUND-H than the sarilumab dose used in SARIL-RA-MONARCH, but it is worth noting that the adalimumab effect was almost double on this outcome in the SIRROUND-H trial. Unfortunately, the SIRROUND-H trial did not show a statistically significant difference between either of the two sirukumab doses and adalimumab on its other co-primary endpoint, ACR50 at 24 weeks. In fact, the 50 mg Q4W dose of sirukumab showed a lower numerical response (percent of patients) than the anti-TNF comparator on both ACR20 and ACR50 at 24 weeks.

The mixed results from the recent SIRROUND-H trial reinforce the concern that this newest class of biologics will struggle in an RA market that is both saturated with successful anti-TNFs and is seeing a surge of more cost effective oral JAK inhibitors on the horizon. Biosimilar competition is also ramping up for TNF antagonists and, according to Datamonitor Healthcare, tocilizumab has a primary patent that is estimated to expire in 2022, with a few tocilizumab biosimilars appearing in preclinical development.[9] Despite the challenges faced by this latest class of RA biologics, it is encouraging to watch these new anti-IL-6 therapies press on through clinical trials and to regulatory submissions considering the unmet need of non-responders and the fact that most RA patients still must change treatment at least once during their lifetime.[10]