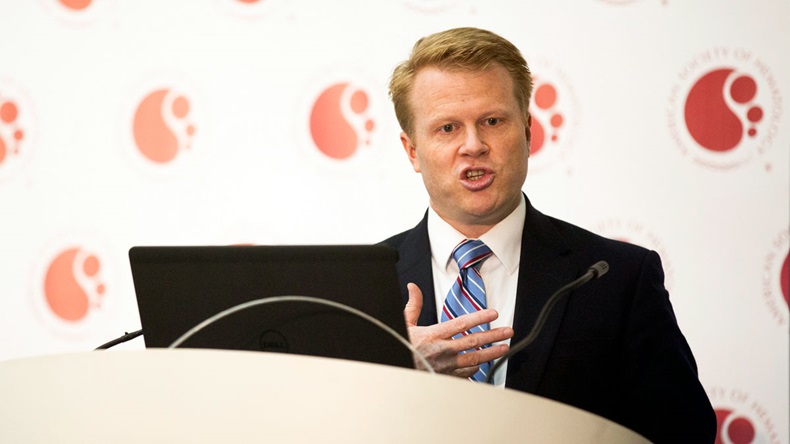 TAIT SHANAFELT OF THE STANFORD UNIVERSITY SCHOOL OF MEDICINE

AbbVie Inc./Johnson & Johnson's Imbruvica (ibrutinib) and J&J's Darzalex (daratumumab) were two of the biggest stars on the main stage during the late-breaker session that ended the annual American Society of Hematology (ASH) meeting on Dec. 4 in San Diego.

Investigators presented data that they described as practice-changing, because of the efficacy and safety gains compared with the standards of care for younger previously untreated patients with chronic lymphocytic leukemia (CLL) and older newly diagnosed individuals with multiple myeloma. In both cases, progression-free survival (PFS) and overall survival (OS) were improved, but notably for CLL patients, safety also was significantly improved by replacing chemotherapy with Imbruvica.

The study evaluating the Bruton's tyrosine kinase (BTK) inhibitor Imbruvica plus Roche/Genentech Inc.'s and Biogen's anti-CD20 antibodyRituxan(rituximab) versus the standard-of-care chemotherapy regimen fludarabine, cyclophosphamide and Rituxan (FCR) was sponsored by the National Cancer Institute (NCI) and the ECOG-ACRIN Cancer Research Group, with funding from the NCI and Pharmacyclics Inc., an AbbVie company.

CLL and small lymphocytic leukemia (SLL) patients in the clinical trial were randomized on a 2:1 basis to receive 420 mg per day of Imbruvica until disease progression and seven cycles of Rituxan (IR) or six courses of FCR. There were 77 PFS events and 14 deaths across both arms of the study in the intent-to-treat group at a median follow-up of 33.4 months.

“These definitive results show why large trials like this that test new therapies in an effort to achieve clinically meaningful benefit for patients, are so important,” Richard Little of the Cancer Therapy Evaluation Program at the NCI said in a statement from the institute.

Lead investigator Tait Shanafelt, the Stanford University School of Medicine professor of hematology who presented the data at ASH, noted during a Dec. 3 press conference at the meeting that the study is a registrational trial with a design and endpoints that were signed off by the US FDA.

AbbVie and J&J have not revealed whether they will seek approval for Imbruvica plus Rituxan for previously untreated younger CLL patients, but they will discuss the study results with regulators, Danelle James, head of clinical science at Pharmacyclics, toldScripin an interview at ASH.

James pointed to the ECOG-ACRIN study and other data presented at the meeting as compelling evidence that chemotherapy should no longer be the standard of care in many CLL settings.

For instance, data from the Phase III iLLUMINATE study presented on Dec. 3 showed that the combination of Imbruvica and Genentech's next-generation anti-CD20 agentGazyva(obinutuzumab) significantly improved PFS versus Gazyva plus the chemotherapy drug chlorambucil in newly-diagnosed CLL or SLL. With a median of 31.3 months of follow-up, median PFS was not reached in the Imbruvica/Gazyva arm, but was 19 months in the Gazyva/chlorambucil arm (HR=0.23).

The FDA accepted a supplemental new drug application (sNDA) for Imbruvica in combination with Gazyva based on the iLLUMINATE results in October. The drug already is approved in the front line as a monotherapy – long-term follow-up data from newly diagnosed and relapsed/refractory CLL patients also were presented during the ASH meeting, showing sustained remissions for up to seven years for patients treated with Imbruvica, but without chemotherapy.

"The totality of the data supports that chemotherapy is not the best way to treat these patients in CLL in the front-line setting," James said.

But while combining two targeted therapies to boost efficacy and improve safety relative to long-used chemotherapy drugs may be practice-changing, Shanafelt noted in a statement issued by ASH that one remaining question about the use of the IR regimen rather than FCR is the impact of Imbruvica's cost of about $10,000 per month – a question that fell outside the scope of the ECOG-ACRIN study.

One way that AbbVie/Pharmacyclics and J&J are working to limit the financial impact of long-term or chronic Imbruvica dosing, is by testing Imbruvica in various combination regimens to see if the drug can be administered alongside other novel therapies over fixed durations, James explained.

"We have to look beyond the cost of therapy to the cost to society and the cost to the individual patient [of chemotherapy] – keeping the patient out of hospital without the need for supportive care and treatment of infections and being able to go back to work all benefit the patient and society; that's what the drug is bringing from a value perspective," Craig Tendler, vice president of late-stage development and global medical affairs for oncology, hematology and supportive care at J&J subsidiary Janssen Pharmaceutical Cos., said in an interview.

That said, Tendler noted that "for some patients, it may be difficult to stay on the treatment for long periods of time. We are looking at combinations that can show the same improvement with a fixed duration of treatment," including studies with AbbVie and Genentech's Bcl2 inhibitor Venclexta (venetoclax). Venclexta also has been successful in combination with Gazyva in the front-line CLL setting. (Also see "CLL Sector Heats Up, AbbVie/Roche Upbeat About First-Line Venetoclax Combo" - Scrip, 1 Nov, 2018.)

Shanafelt noted during the press conference and his ASH late-breaker presentation that two ECOG-ACRIN trials will be initiated soon to test 12-month regimens of Imbruvica plus Gazyva versus Imbruvica plus Venclexta – one of which will enroll CLL patients aged 70 and older with the other testing the combination regimens in patients 70 and younger. Efficacy and safety will be evaluated as well as the cost-effectiveness of these short-term regimens using novel targeted medicines.

MAIA participants tended to be older patients, ranging from 45 to 90 years old with a median age of 73. Lead investigator Thierry Facon of Claude Huriez Hospital in Lille, France noted during the Dec. 3 ASH press conference and his Dec. 4 presentation of the MAIA data that 44% of patients were 75 or older, which was a little higher than in the real-world multiple myeloma setting where about a third of patients are 75 or older.

Responses to treatment also were improved by the addition of Darzalex to the Rd standard of care in these older, newly-diagnosed patients with complete responses in 48% of those treated with D-Rd and in 25% of patients treated with Rd. The percentage of patients who were minimal residual disease (MRD)-negative was three times greater for D-Rd compared with RD – 21% versus 7%. MRD-negativity is believed to be a predictor of a good prognosis.

The PFS, CR and MRD improvements did not come without a safety trade-off, however, with higher rates of some grade 3 and 4 TEAEs, including neutropenia (50% for D-Rd versus 35% for Rd), lymphopenia (15% versus 11%) and pneumonia (14% versus 8%). TEAEs more common for Rd-treated patients included anemia (20% for Rd versus 12% for D-Rd) and thrombocytopenia (9% versus 7%).

Tendler noted that Janssen also is looking at shorter-term combination therapy regimens in multiple myeloma to see if Darzalex or any of the company's other drugs or drug candidates can be combined with other agents to achieve remission during a fixed duration of therapy that can be maintained after treatment stops.