by Daniel Chancellor
Topics: Cancer |
Provided by Datamonitor Healthcare: data analysis and insight |
Get a free demo
Product login
Share
In April, immuno-oncology (IO) celebrated its ninth birthday, following the approval of Provenge, the first drug that harnesses the body’s immune system to fight cancer, in April 2010. Since this landmark event, it has been a tremendous decade for the field, with IO becoming part of the standard-of-care in a range of treatment settings and the Nobel Prize being awarded for the discovery of immune checkpoint inhibition. It is the checkpoint inhibitor drug classes that are leading the IO revolution and will act as a foundation for the next decade of oncology research. This article reviews the childhood years of IO and predicts what the future may hold as it reaches double digits and matures through adolescence.

An Explosion In Trial Activity
With clinical trials being the main driving force for the biopharmaceutical industry, reviewing trends provides both an interesting snapshot of past successes and a glimpse into what the future might hold. In total, Informa Pharma Intelligence’s Trialtrove database lists 3,450 industry-sponsored clinical trials from January 2010, incorporating drugs with an IO mechanism for an oncology indication. The top-line analyses show that trial activity is booming, in particular due to the proliferation of combination studies and the application of IO to an increasing number of tumor types.

At the start of the decade, IO was still very much experimental and just 86 such trials were initiated in 2010. However, this has increased tenfold, with a record 833 clinical trials initiated by industry last year; more than two every single day. In particular, the approvals of the first PD-1 checkpoint inhibitors in 2014 coincided with a period of intense acceleration, as competitors reacted to the potential showed by Opdivo (nivolumab; Bristol-Myers Squibb) and Keytruda (pembrolizumab; Merck & Co.). Even through the latter part of this decade, there has been considerable activity with early-stage, Phase I research, suggesting that IO is a long way from reaching maturity and there are many new clinical hypotheses to test (see Exhibit 1.)

Exhibit 1.
Number Of IO Trials Has Rocketed Since 2014 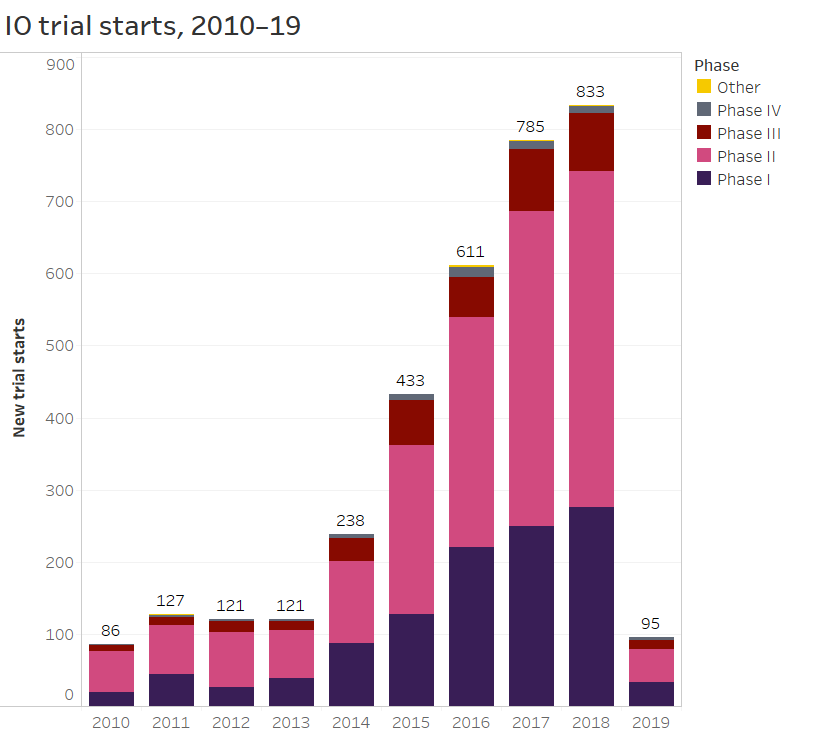 Across this dataset, over 50 discrete cancers have been investigated. The majority of development has occurred in the prevalent solid tumors, although non-Hodgkin’s lymphoma appeared prominently at the start of the decade. This was the main indication for development of anti-CD20 antibodies, a target expressed on immune cells, but is not an IO approach in the truest sense. As the decade progressed, melanoma notably gained prominence as the first indication with proof-of-concept for checkpoint inhibition to be established. Success in this hard-to-treat disease, and the rise of PD-1 inhibitors, enabled drug developers to pivot towards the hugely important non-small cell lung cancer (NSCLC) indication, which is the single most studied indication through the last decade. There has also been a consistent rise in trials investigating tumors classified by a molecular or genetic signature, rather than by their location (see Exhibit 2.).

Exhibit 2.
NSCLC Trials Have Increased Over The Last Decade 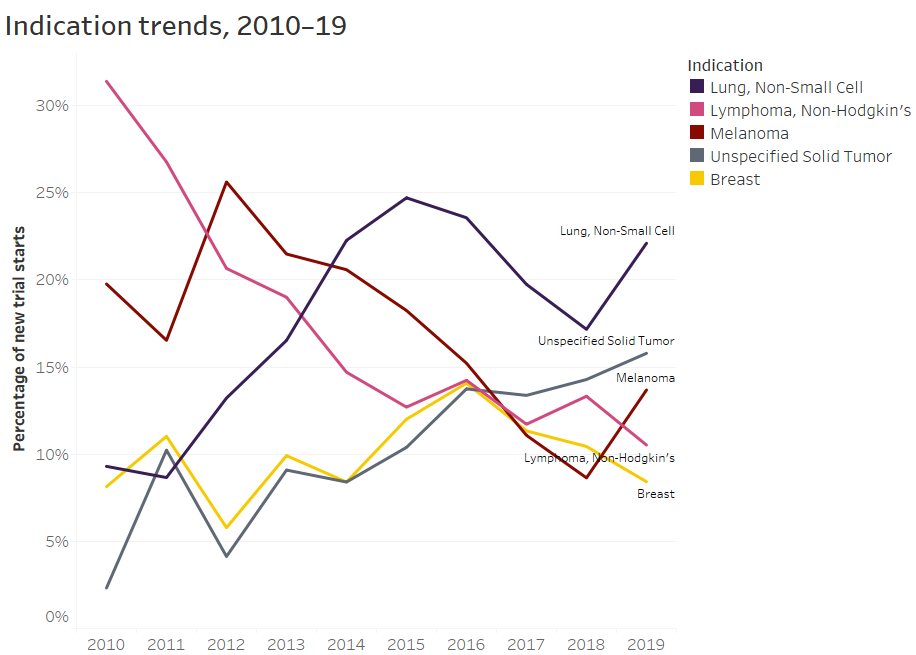 As IO is being trialed across the entire spectrum of oncology, developers have made a concerted shift towards establishing IO in new populations, especially earlier in the treatment algorithm. Part of this strategy has involved combining IO with the existing standard of care. The rationale behind combining IO with another treatment approach, typically chemotherapy, targeted therapy, or another IO drug, is to treat patients that may not respond to monotherapy, or to provide a deeper and more durable response than that achieved by a single agent. Since 2015, the majority of new trials have involved a combination regimen, and it is feasible that almost all IO trials in the future will involve multiple agents.

Each of the three common combination treatment modalities are being explored extensively. There are marginally more trials of IO in conjunction with a targeted treatment, although the IO-IO combination is increasing at the fastest rate as developers seek to discover new targets to combine with a PD-1 inhibitor backbone. The most popular mechanism in this setting is IDO inhibition, which has met with multiple failures so far, shifting attention towards a plethora of new targets such as LAG3, 4-1BB and OX40 (see Exhibit 3.)

Exhibit 3.
The Number Of IO-IO Combination Trials Is On The Rise 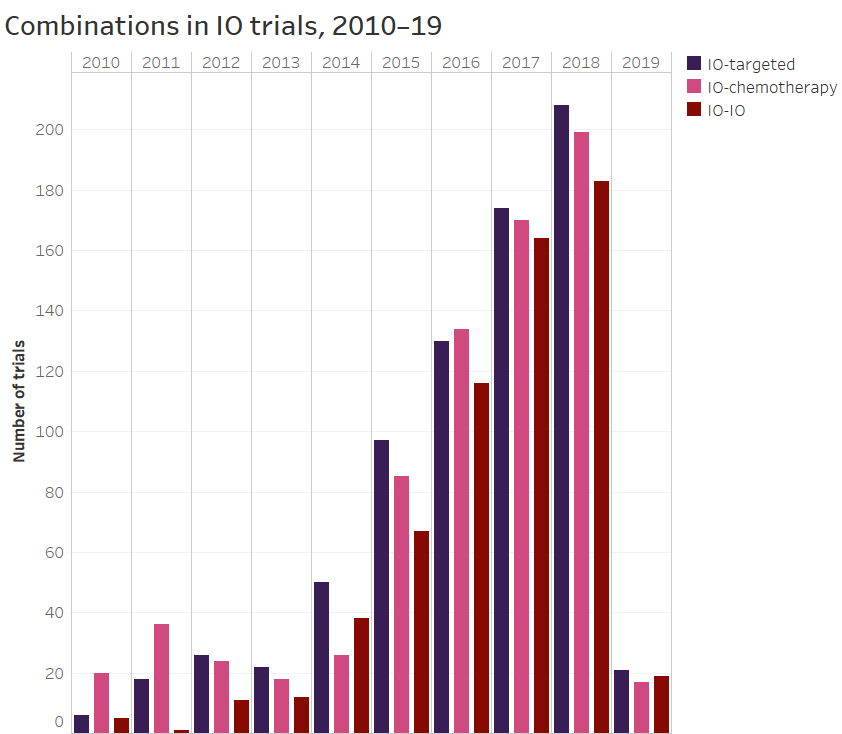 A Lucrative Market That’s Still Growing
The huge growth in clinical trial activity is very much a proxy for the market direction. As IO has transitioned from experimental to foundational, with ever-growing product labels for some of the leading PD-1 inhibitors, the commercial landscape has become increasingly lucrative. In total, Datamonitor Healthcare estimates that the oncology market was worth $125bn globally in 2018. This has grown by 50% in the last five years, and almost doubled since the start of the decade. Conventional oncology drugs have been behind much of this growth, in addition to macro factors such as patient demographics, improved survival statistics and drug price inflation.
New IO drug classes are also making an important contribution to the wider oncology market, with sales of around $17bn in 2018. It is these drugs that will be fundamental to the continued growth of oncology, with even conservative forecasts placing their potential at $44bn by 2023, by which time IO will account for around one quarter of the total oncology market. Much of this growth will belong to the PD-1 inhibitor class, with all six currently approved PD-1s expected to become blockbusters. This follows their continued approvals in new tumor types and treatment settings, as well as widespread acceptance among treatment guidelines, payers and physicians. Exhibit 4 shows how sales of conventional oncology drugs will begin to plateau, leaving IO as the all-important growth driver.


Exhibit 4.
IO Will Significantly Contribute To Growth Of The Oncology Market 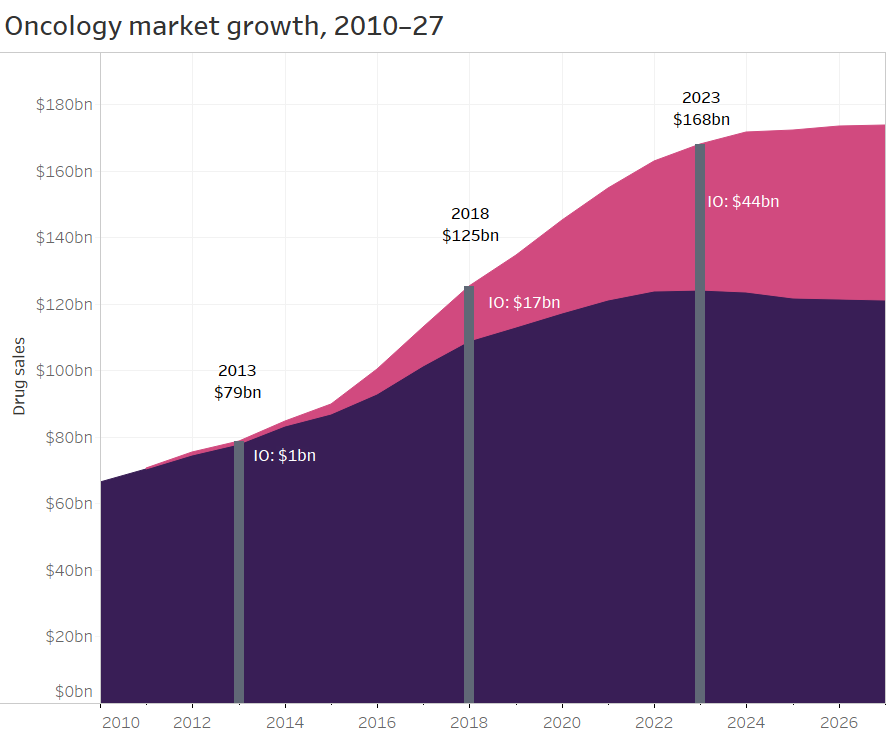 Payers And Market Access Will Ultimately Constrain IO Market
Various estimates place the cost of treating cancer at up to 10% of total health care spending in major markets, and as Exhibit 4 shows, the direct costs associated with pharmaceuticals have risen greatly in recent years. When you combine this with pressure on payers to provide access to hugely important checkpoint inhibitors, which can cost $150k per patient, it is clear that the growth of IO is only sustainable up until a point. In order to fund continued access to all of the cancer patients that may benefit, either oncology budgets must mirror this dramatic growth, or other areas of health care spending must be targeted for savings. A German payer revealed: “We see around a 15% budget impact increase in oncology from last year to this year, and 15% every year. We will see 30% or 40% if those combinations, all of them, come to the market.”
Greater competition among the PD-1 class should breed greater competition in pricing, and an overall improvement in affordability. At the moment, many treatment settings only have one or two approved IO options, although this will change as some of the later entrants achieve broader product labels. At this time, the balance of power will certainly shift towards payers, who will be in a strong negotiating position to secure discounting to win reimbursement. “There has not been any steep discounting yet, but as there is more and more competition, in order for them to entice physicians to use their product, they probably will discount through the distribution chain, and the average sales price will decline,” a US-based payer said.

Combination IO will also be emerging into mainstream clinical practice over the next few years, which brings a potential doubling in direct treatment costs. In the longer-term, indication-specific pricing is a viable solution, whereby a single drug has multiple price points, depending on the diagnosis and treatment strategy. This adds a great deal of complexity and the necessary laws and systems are not yet in place to facilitate this on a large scale. In the meantime, there is relatively little that can be done to control spending with combinations, except for cases when a single manufacturer owns all of the constituents and can effectively discount one of the drugs, for example Bristol-Myers Squibb marketing both Opdivo and Yervoy (ipilimumab) for melanoma. A European payer said: “It is easier to use it if the combination comes from the same manufacturer. If it comes from different companies, it is not always clear whether a drug was used as a single agent or in combination, and the manufacturer is not willing to pay a hidden rebate in a price-volume agreement for its monotherapy setting.”