Immuno-Oncology: Sneak Peek of Preclinical Candidates Waiting in the Wings

Plenty of excitement has been generated recently in the immuno-oncology sphere by the accelerated approvals in May 2016 by the FDA for Bristol-Myers Squibb’s PD-1 antagonist, nivolumab (Opdivo), in relapsed/refractory classical Hodgkin’s lymphoma and for Genentech’s PD-L1 antagonist, atezolizumab (Tecentriq), in relapsed/refractory, advanced or metastatic urothelial carcinoma.  Those approvals along with an abundance of data reported at the ASCO 2016 annual meeting on immuno-oncology [1] seems to have spurred multiple investment deals in June and already in July, according to Strategic Transactions [2].

But which immuno-oncology candidates are poised to begin their first-in-human (FIH) clinical trials?  How many sponsors already have partners or collaborators?  What oncology indications have been proposed?  And where will these trials take place?  Informa’s Pharma intelligence suite of services can offer some clues.  A search of Trialtrove in mid-June 2016 for planned, phase I or I/II trials with a mechanism(s)-of-action (MoA) of “Anticancer immunotherapy” in conjunction with a search of preclinical drugs in Pharmaprojects with the same MoA, provided a list of 47 drugs/therapies [3].

As shown in Table 1, these preclinical drug/therapy candidates are in development by 47 different companies along with 14 academic/medical/government organizations.  Sponsors of 21 candidates already have collaborators or partners for early clinical development.  The FIH trials are designed as single agents/monotherapies trials, combination trials and as both single agent/monotherapy and combination trials with other immunotherapies, targeted agents, chemotherapy and activator drugs (data not shown). 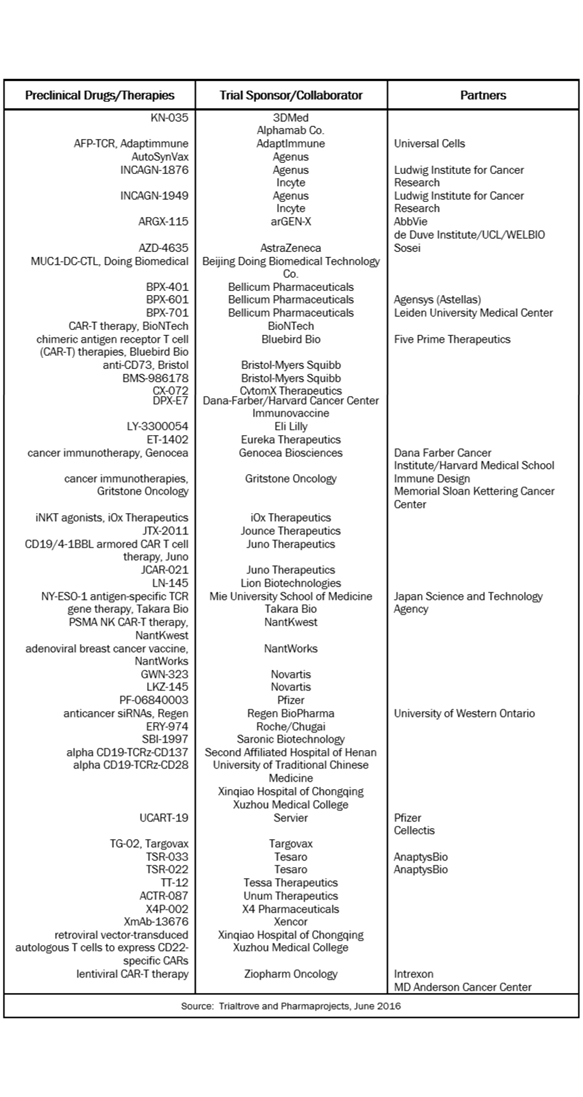 The breakdown of proposed disease indications for these FIH trials is shown in Figure 1.  As expected with the limited information available in the public domain for these planned trials, most of the sponsors of these drugs or therapies have only divulged that the FIH trial will be in patients with solid tumors or general cancer.  And it’s important to note that many of these FIH trials include more than one disease indication, thereby leading to higher trial counts.  However, specific hematological malignancies and solid tumors have been identified in 29 and 30 trials, respectively.  Non-Hodgkin’s lymphoma, acute lymphocytic leukemia and chronic lymphocytic leukemia are the top three hematological malignancies while non-small cell lung cancer and melanoma are tied for first place and head/neck and liver tied for second among the solid tumors.

Also of interest is the breakdown of these preclinical drugs/therapies by MoA. While over half of these candidates are T cell stimulants (29) and ten more are either natural killer cell or general immunostimulants, the rest of the candidates act via 16 different MoA as shown in Figure 2.  In addition, two of these candidates act via dual mechanisms (ERY-974 and XmAb-13676).  Hopefully this diversity in MoA will help to boost the likelihood of future effective monotherapies and combinations with drugs already approved or in clinical development.

Finally, while it’s not surprising that the locations for most of these planned FIH trials have not yet been disclosed, eight countries have been identified as shown in Figure 3.  The top five locations are the United States, China, Canada, the United Kingdom and Spain.

Hopefully the strategic collaborations and partnerships, the diversity in mechanisms-of-action and the variety of oncologic indications represented by these preclinical immuno-oncology candidates will help propel them onto the immuno-oncology center-stage but more importantly, will translate into several additional transformational drugs and therapies for cancer patients in the foreseeable future.

[2]A query of Strategic Transactions in early July 2016 using the keywords “immuno-oncology” and “immunotherapy” resulted in 12 deals since 1 Jun 2016.