The TRK inhibitor won over ASCO with deep and durable responses across 17 cancer types, but diagnostics will be the true test of the tumor-agnostic approach – and the focus of Loxo's commercial strategy. 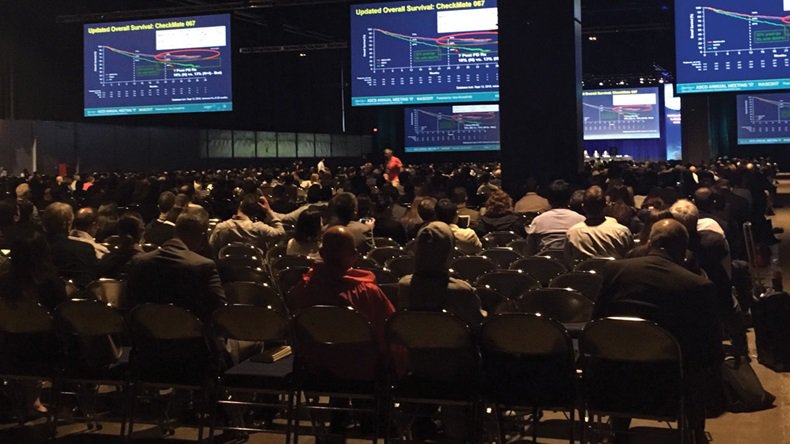 Having demonstrated a 76% response rate with deep and durable responses, Loxo Oncology Inc. revealed impressive pivotal data for larotrectinib, which seems poised for approval next year; the challenge now lies in awareness and adoption of testing that's required to identify the TRK fusion abnormality the drug targets.

"Testing is the key question," Loxo Chief Business Officer Jacob Van Naarden told Scrip June 3 in an interview at the American Society of Clinical Oncology meeting in Chicago, where the data were presented by lead investigator David Hyman of the Memorial Sloan Kettering Cancer Center.

"To really enjoy these benefits, we have to change the paradigm by which we test patients," Hyman said during a June 3 press briefing on the data, which will be submitted for US FDA approval later this year or early in 2018.

Larotrectinib is a targeted therapy that selectively inhibits the tropomyosin receptor kinase (TRK) fusion protein, but unlike traditional oncology programs that target mutations in a given tumor type, larotrectinib is not tied to the cancer location.

Loxo is aiming to have the first novel drug developed and approved for a tissue-agnostic claim, as well as the first with simultaneous approval in adults and children. Merck & Co. Inc.'s PD-1 inhibitor Keytruda recently became the first FDA approval for a molecularly defined cancer that does not specify tumor location. But the indication for microsatellite instability-high or mismatch repair deficient solid tumors was not the first approval for pembrolizumab and was based on retrospectively assessed data. (Also see "Keytruda Approval Opens New Routes For Immuno-Oncology" - Scrip, 24 May, 2017.)

Adoption of these histology-independent molecularly targeted therapies will be utterly dependent on testing, Van Naarden acknowledged. "Testing is the central remaining question around the program and around any rare tumor-agnostic new cancer drug, whether larotrectinib or Keytruda for MSI-H or the next five or 10 drugs that come along and look like this," he said.

These efforts are aided by the trend in recent years toward genetic testing in academic and community practices, facilitated by next-generation sequencing and panels that run multiple tests at once.

TRK can be identified by standard lab-developed tests and as part of panels, which is how the clinical trials were enrolled. "Physicians were finding TRK fusion patients, not because they were looking for that, because they were looking for a whole lot of things all at once and the TRK fusion popped up. And that's fine, we love that," Van Naarden said. "Unfortunately, the problem with that approach today is that maybe one in 10 patients today gets access to a test like that."

Lack of standardization is also an issue, as is lack of insurance coverage for testing. But there are two NGS options under review at the FDA, Foundation Medicine Inc.'s FoundationOne and Thermo Fisher Scientific Inc.'s Oncomine, "and hopefully, in time, FDA approval and standardization leads to more consistent reimbursement, which then leads to more testing," Van Naarden said.

But Loxo also is partnering with Roche's Ventana Medical Systems Inc. diagnostics business on a simple TRK immunohistochemistry test that it will submit for FDA approval as a companion diagnostic. "There's always going to be corners of the community that are going to like relying on these types of tests that are inexpensive and high throughput," Van Naarden said. "Our program is tumor-type agnostic – we're diagnostic-type agnostic. We just want more testing."

Along with testing, education and awareness are critical commercial issues for the company, Van Naarden said. That's why the company and investigators decided to present at ASCO this year – and they made it "in the nick of time" with the 55 patients that had been agreed with FDA as the pivotal dataset across three trials. "This is the biggest cancer meeting of the year," Van Naarden pointed out. "We may have an approved drug next year and the reality is that until this weekend most people had never heard of TRK and had never heard of larotrectinib. And at the end of the day, I think the drug data speak for themselves, but if you aren't looking and don't have the awareness, you're never going to know about it."

Loxo has started hiring a commercial team and its strategy is "coming together," the exec said. "It's a very diagnostics-focused commercial plan. We're going to have to interface very tightly with oncology and pathology in the same room," which he noted was an important factor in successful clinical trial sites. "When they're integral to making the diagnosis, they have to have a seat at the table."

Patients in the clinical trial were identified with local testing; 15 different labs identified the patients. "This in a sense really represents the real world identification of these patients," Hyman observed.

But without better testing, there's a certain amount of uncertainty about the patient population, Van Naarden admitted, adding: "Ultimately what's more important than those numbers is testing. It doesn't matter how many patients if you can't find them."

The TRK fusion mutation occurs in dozens of cancer types across patients' lifespans. According to ASCO, the abnormality occurs in about 0.5%-1% of many common cancers, but in greater than 90% of certain rare cancers, such as salivary gland cancer, a form of juvenile breast cancer and infantile fibrosarcoma. "At this point it is hard to find a cancer type where TRK fusions have not been reported," Hyman told the press briefing.

There were 17 unique tumor types in the pivotal dataset, including common cancers as well as rare forms and pediatric cancers. The ages ranged from 4 months to 75 years, and patients had an average of two prior therapies.

The median time of first response was 1.8 months, but Hyman explained that reflected the time the first scan was obtained. "In the clinic, patients report dramatic improvement of their symptoms within days of beginning therapy."

The responses have been durable, with 79% of responses ongoing 12 months after starting treatment. Of the responders, 93% remain on therapy or had surgery with curative intent.

"More than three out of every four patients responded to therapy. You'd be hard pressed to find a targeted therapy even within a single disease context that has results like this," Hyman said.

And, larotrectinib was also an "extremely well tolerated therapy," the investigator stated, with only 13% of patients requiring any dose modification and no patients discontinuing due to adverse events. The most common adverse events were fatigue (30%), dizziness (28%) and nausea (28%).

Even with "striking" and "very impressive" response data, and a likely approval smoothed by FDA's breakthrough therapy program, larotrectinib and other tissue-agnostic therapies will still face adoption challenges above and beyond biomarker testing.

"The real challenge moving ahead is for oncologists to determine whether larotrectinib would sit in existing treatment algorithms," Sumanta Kumar Pal, City of Hope, said in discussing the results. Screening and use right away makes sense in rare cancers where there's no established standard of care, but "in the case of other diseases such as colon cancer or prostate cancer, we really have to sit down and determine how larotrectinib sits against existing standards."

The same situation applies to Merck's Keytruda and other molecularly defined treatments, he added. "It will be important to develop guidelines around testing for these expanding indications."

Van Naarden admitted that more experience and data will be needed to guide the use of larotrectinib in cancer types with a well-stocked armamentarium. He noted that major tumor types were probably under-represented in the clinical database, because clinicians wanted to see patients with lung or breast or colon cancers get treated with standard of care regimens first.

That's an issue that will take time to resolve, and will be influenced by how the FDA labeling is crafted. "We'll see what it allows," Van Naarden said, but he predicts it will be flexible and allow clinicians to make treatment decisions.

Fitting in among different standards of care in different cancer settings also makes pricing an even more complicated proposition. Van Naarden thinks the efficacy and safety profile builds a strong value proposition, and while it's still early, Loxo is starting to have those conversations with payers.

Loxo may not have a long lead on the market. Ignyta Inc.'s entrectinib has the same breakthrough designation from FDA for treatment of NTRK fusion-positive, locally advanced or metastatic solid tumors in adult and pediatric patients. (Also see "Oncology: Tissue-Agnostic Indications Advance Under US FDA's Breakthrough Umbrella" - Pink Sheet, 25 May, 2017.)

Resistance is also a concern, as with many targeted therapies, but Loxo has prepared for that and has been advancing a follow-on compound, LOXO-195, in parallel. The company predicted that acquired point mutations in the TRK fusions would prevent larotractinib from binding where it had been, but that the tumor would still be addicted to the same pathway and a new TRK inhibitor that binds differently would be effective. "The idea behind LOXO-195 is this sequential therapy extension of durable disease control," Van Naarden said, akin to EGFR inhibitors in lung cancer.

LOXO-195 is being studied in patients who progress on larotrectinib, and it worked in the first two patients that developed resistance. "Eventually patients will need it – we don't know when and hope it's a long time – but we want it to be there when they do," the exec said. It was a very deliberate effort, he noted, "and frankly we think this is how modern oncology drug development ought to happen."