Deal Making: If I Knew Then What I Know Today

David Chiswell, Jane Dancer and Konstantinos Efthymiopoulos shared lessons they have learnt over the years about deal making at this year's 'If I Knew Then What I Know Today' panel at the AngloNordic meeting in London. 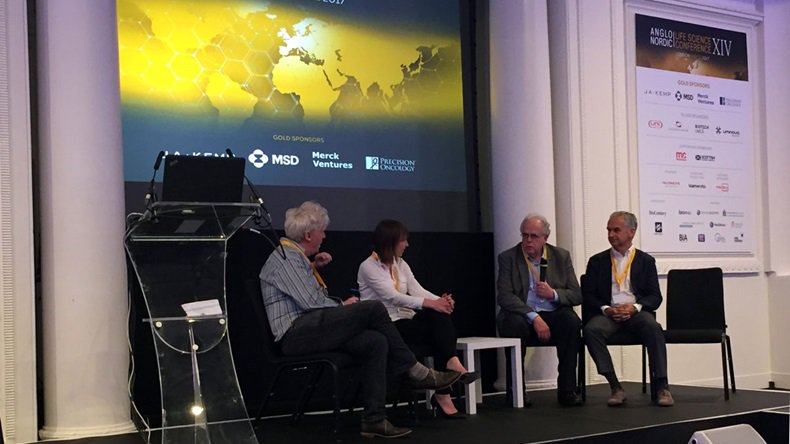 Risks, regrets and missed opportunities were some of the underlying themes of this year's 'If I Knew Then What I Know Today'panel discussion at the 14th AngloNordic meeting in London. Scrip's Mike Ward spoke to Kymab Ltd.'s chair, David Chiswell; F-Star Biotechnology Ltd.'s chief operating officer, Jane Dancer; and Konstantinos Efthymiopoulos, SynAffix BV's chair, about deal making, lessons learnt and what they wish they had done – or indeed hadn't done.

One thing that F-Star's Dancer wished she had wasted less time on, in her early days of deal making, was financial modelling to the nth degree valuations of early stage deals, particularly when it came to Monte Carlo simulations, real options, rNPVs (risk adjusted net present values) and spreadsheets.

“We used to model them within an inch of their lives and yet, in hindsight, if you are working on a program which is very earIy stage, a discovery program that is fundamentally a technology and a target, it is very difficult to come up with a sensible number at the end,” she noted.

“Ultimately, something is worth what someone is willing to pay for it. To demonstrate value, we do a lot of benchmarking which externally can be difficult as sometimes we only have the information that is available in press releases and people can be fairly good at hiding the true value of the deals,” she added.

For David Chiswell, a serial entrepreneur, chair of a number of companies and founder and CEO of Cambridge Antibody Technology Group PLC (CAT), it is important to attract talented people to help with the deal making process. In the early days of CAT, a UK antibody technology company created in 1990 which went on to discover what is now the world’s best-selling drug Humira(adalimumab), as CEO he was the sole deal-maker, humorously admitting that he did not know what a Monte Carlo simulation was at the time.

“I was the one on the road doing the deals. So, the lesson I learned was: get some good people in to do the legwork for you. Now it is a little more frustrating for me as I have [at Kymab] a business development team of four people and I can’t get involved. You have to learn to hand over as they have to do the deals, although I have to agree to the terms. Fundamentally, the job is identifying and motivating the right people,” he added.

In the 1990s, on the road literally meant travelling to the US East coast and US West coast visiting individual companies – biopartnering meetings were only just arriving on the scene. “We had the advantage that CAT had a profile that meant that companies would see us and we could get the discussions going. However, any NPV would have been hugely negative and so it was important in discussions to get away from that and instead sell the vision and then, as Jane mentioned, what you could sell it for,” he noted.

Biotechs were so cash-strapped in the middle to late 1990s that cash-rich pharma companies held the upper hand in negotiations. “There were times when there was a deal on the table that you really didn’t want to do but could you pay the wages if you didn’t? And so in the end we would sometimes do the deal. Part of the lesson is, particularly with early stage companies, you do what you can do to live another day,” he added.

While there are many aspects of the industry that are evolving and shifting in prominence – immuno-oncology was barely talked about five years ago and now is the biggest show in town - Synaffix's Efthymiopoulos acknowledges that other aspects have remained relatively constant. “These include how we maximize the value of deals,” he explained.

Indeed, Efthymiopoulos told the audience that it doesn't always make sense to wait for the 'perfect deal’. "We missed deals because we were not happy with what it was offering but in hindsight, if we had signed the deal then it would have created momentum that might have facilitated other deals."

Echoing Efthymiopoulos’ observation, Chiswell reminisced about he concluded one deal which had clauses in it that he considered very dangerous just to ensure the wages of staff were paid. However, that deal catalysed the closure of a more lucrative deal shortly after. “Within two weeks of signing the first deal we completed the other deal we were negotiating with much money and better terms. Would we have concluded the second deal at the same speed had we not done the first?” he asked rhetorically.

Unfortunately, Efthymiopoulos admitted, he did not do the so-called bad deal nor a following good deal.

For Dancer, recounting what she learned on her MBA course, she likes to enter negotiations with a backup plan to a potential agreement. “You need to think what is the alternative and, wherever possible, try and have a fall-back option or at least know what will happen if you walk away.”

Probably the most important lesson for Dancer is to get the deal making model right as that will set the tone for subsequent transactions. “CAT established an approach, which is used by other antibody companies, where we licensed target by target. If you follow that then that is what you will do for the rest of the corporation’s life as it is very hard to undo. So you need to think carefully, don’t sign up to something in those early deals which might complicate other deals in the future," she said.

Adopting such asset-centric negotiations, Efthymiopoulos added, creates opportunities to establish competition for promising programs, especially as pharma companies have become more reliant on innovation from biotechs. “This can result in higher deal valuations, even for early stage assets. It was not like this in the early days when I started.”

While the asset-centric approach of building companies is clearly the preferred route for both Dancer and Efthymiopoulos, Chiswell argued that such approaches might provide early benefit to investors but that the company itself does not benefit as much as it could. “I am here to build a company and if it is successful investors will make money. If they take it out too soon then that will stymie the company,” he added.

“I don’t think there is a right or wrong answer on this one,” said Dancer.

Indeed, for the venture-backed companies that Dancer and Efthymiopoulos are involved with, the asset-centric approach is attractive as it can provide early returns on investment. Conventional fully integrated biopharma companies, however, will need to be able to access patient capital, as Kymab does, to build scale.