Microbiome Modulators for Gastrointestinal Disorders In 2018: Market Overview & The Current Phase I Candidates

The discovery and deep investigation of the microbiome has been one of the most significant recent biomedical advances. Extensive research suggests that dysbiosis of the gut microbiome plays a significant role in multiple gastrointestinal (GI) disorders such as; Crohn’s disease, ulcerative colitis, and irritable bowel syndrome (IBS). There are currently no cures for these disorders and many available treatments are not effective at relieving symptoms, or well tolerated by patients. Thus, there is a huge unmet need for a new generation of therapeutics which may improve the lives of people with GI disorders such as these. Early research into microbiome modulators demonstrates their promise in meeting these unmet needs and thus, they are of great importance for the GI market. As of January 2018, there were four Phase I modulators in development.


The microbiome and its potential for treating gastrointestinal diseases

Every human being hosts between 10–100 trillion symbiotic micro-organisms, including bacteria, viruses, and archaea. The collective genomes of these micro-organisms form what is known as the human microbiome.[1]

The microbiome impacts human physiological functions in many ways, such as contributing to metabolic functions, protecting against pathogens, and interacting with immune system development.[2] Research is now primarily focused upon investigating exactly how its interactions within the body contribute to health and disease.

A significant proportion of microbiome research is concentrated on gastrointestinal diseases, particularly irritable bowel syndrome (IBS) and inflammatory bowel disease (IBD). IBD consists of two chronic and currently incurable diseases of inflammation involving the GI tract: ulcerative colitis (UC) and Crohn’s disease. The microbiomes of patients suffering with IBD and its subtypes are thought to fluctuate more so than in healthy patients, and this fluctuation or potential dysbiosis is believed to contribute to the inflammation characteristic of IBD.

IBS, unlike IBD, has no associated inflammation of the gut or clear cause, and is instead better described as a collection of symptoms. The specific cause of IBS is still unknown, but the gut-brain axis has been implicated, with stress and changes in gut bacteria thought to result in alterations in both the nerves controlling bowel movement and fermentation within the intestines.[3]

As a deeper understanding of the microbiome has been gained, the floodgates have opened for drug development companies to investigate the potential of microbiome modulating therapies for the treatment of both IBD and IBS, among other gastrointestinal diseases.

The modulator market as of January 2018, analysed by therapeutic area 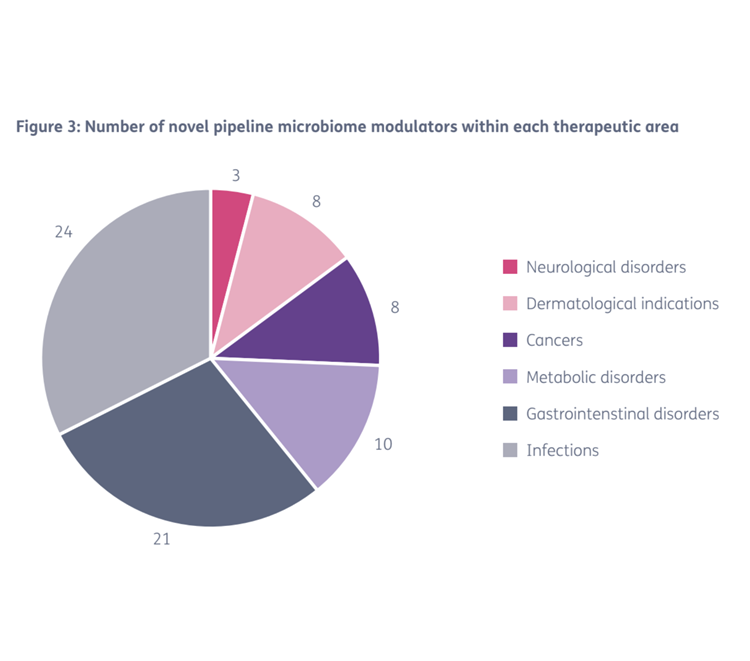 The dominance of these two areas has resulted in gaps in other sections of the market. Despite the prevalence of drugs that can result in remission of symptoms of both UC and Crohn’s there is still an unmet need for well-tolerated treatment that can bring about remission of symptoms quickly. These gaps highlight where the market can continue to expand, as currently only four modulators in total are in development for UC and Crohn’s.

The Four Phase I Candidates

Figure 5 presents the number of drugs in development for IBD, IBS and their associated subtypes in Phase I or Preclinical stages. The four drugs in Phase I are Blautix; Thetanix; SER-287 and EB8018. We have provided more detail on each below. 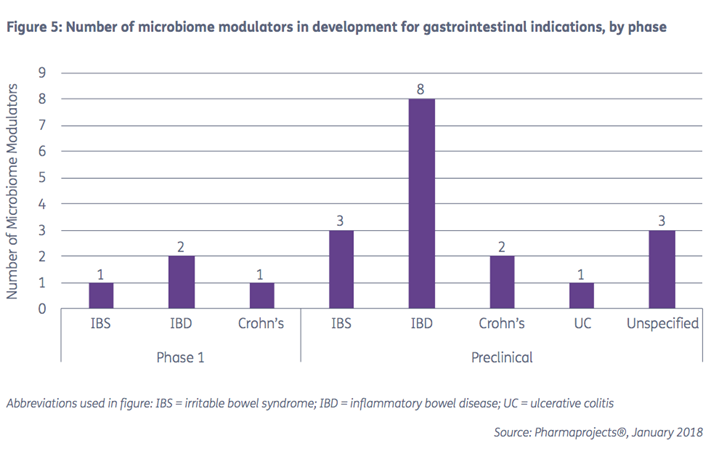 Blautix is a single-strain probiotic product consisting of Blautia hydrogenotrophica. As an acetate producing bacteria, Blautix acts to reduce the levels of carbon dioxide and hydrogen in the gut, which are produced by fermentation by other bacteria. This correspondingly reduces the gas and bloating associated with IBS.[4]

Thetanix is a probiotic product being developed by 4D Pharma for the treatment of pediatric Crohn’s disease. Thetanix is thought to improve mucosal barrier function, resulting in a reduction in pathogens breaching the mucosal barrier, which could lead to reduced inflammation and increased immunity to pathogens.

SER-287 is an oral formulation of bacterial spores, being developed by Seres Therapeutics for the treatment of ulcerative colitis. The exact combination of bacteria that is used in SER-287 has not been disclosed, but Seres has indicated that by increasing the integrity of the mucosal barrier in the colon, SER-287 acts to reduce pro-inflammatory signaling from bacteria.

EB8018 is a small molecule, designed to block bacteria that express type 1 fimbrial adhesion FimH from adhering to the gut wall, for the treatment of Crohn’s disease. Bacteria that express FimH are thought to be overabundant in patients suffering from Crohn’s, and are believed to act to increase inflammation and therefore disease severity. [5]

By blocking the attachment of these bacteria, it is hypothesized that EB8018 will act to reduce inflammation in the gut and improve patient symptoms, which could have benefits over currently available pharmacological anti-inflammatory agents, as these come with side effects such as a weakened immune system.

While the potential for microbiome modulators to treat disease is continuing to be realised, areas of unmet need represent a key opportunity and are likely to experience rapid growth. The future of microbiome modulators looks positive, and the role they play for treating gastrointestinal disorders is likely to be of increasing importance for drug development firms.