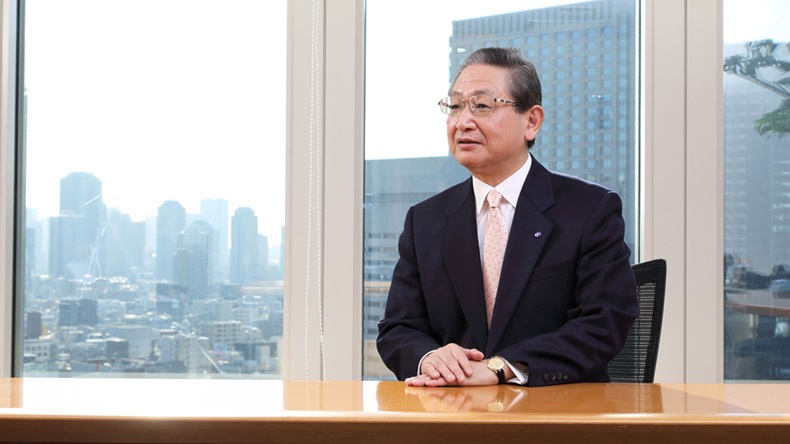 Tatsuro Kosaka was named CEO of Chugai Pharmaceutical Co. Ltd. last December and took up the post at the end of March, after serving most recently as president and chief operating officer. He joined the company in 1978 and has been deputy president since 1989, with a mainly commercial background including in sales and marketing, lifecycle management and development planning. His positions have included several years in the UK as deputy president of Chugai Pharma Europe.

Scrip spoke to him exclusively at Chugai’s headquarters in the Nihonbashi district of Tokyo about some of the major commercial and R&D issues facing the company and its now 15 year-old strategic alliance with Roche.

Q: Will Chugai meet its current mid-term performance targets?
A: We are quite confident that we will be able to achieve the goals of our IBI 18 plan, which started in 2016 and is in the final year this year – last year we achieved record high revenues [of JPY534.2bn ($4.83bn)] and operating profits [JPY103.2bn] in the 15th anniversary of the strategic alliance with Roche. I believe that all the functions…have been steadily progressing. For instance, the core EPS [earnings per share] forecast for fiscal 2018 represents a CAGR [compound annual growth rate] of 9.5% between 2015-18, well above the original plan's target of low single digits. The main reason is the strong growth of global products, such as Actemra [tocilizumab, for rheumatoid arthritis] and Alecensa [alectinib, for non-small cell lung cancer]. So in short, we are very confident. [Revenues this calendar year are expected to rise 1% to JPY541.5bn, with core operating profit seen growing 5%.]


Q:Are you planning another mid-term business plan and how will it look?
A: We are working on this and in January next year we expect to have a new three-year plan which we are formulating now. We are looking at the focus - but besides the hard targets under the plans, what is the mid-term strategic vision for Chugai? Our main corporate vision is to make contributions to patients through drugs and services. Based on this, the new vision is under discussion. But I can share some basic thoughts. Firstly, innovation. Chugai will continue to pursue first-in-class and best-in-class drugs, we will not be involved in the generics or OTC business. Chugai will concentrate on innovative drugs only. To be specific, we will look for the next growth drivers afterActemra,Alecensa, and Hemlibra [emicizumab, for hemophilia A], which came out of our own research laboratories. So, on top of that, speed of R&D will remain critical, given the competitive environment around the world and the new pricing scheme for new drugs in Japan. Secondly, we will further pursue the win-win relationship with Roche and promote patient-centric management, personalized healthcare, to realize advanced and sustainable healthcare. We will pursue treatment based on the classification of diseases. We are required to make quick decisions to cope with an uncertain business environment, I have set up a new leadership team and EVPs over the last months. The last point is people and they are the basis of all that we do, so development for the next generation including management is important.


Q:What are the main R&D and commercial benefits of the strategic alliance with Roche?
A: There are many advantages for both commercial and R&D, let me start with research. Chugai, Roche and Genentech conduct research independently, but the infrastructure such as compound libraries and information on molecules is being shared in the group. This allows Chugai to access state-of-the-art research tools that we cannot afford on its own. Alecensa was developed using this infrastructure. Chugai has first refusal rights in Japan [and South Korea and Taiwan] to Roche and Genentech projects and products, but we also continue to develop and discover new drugs from our research labs. It is like a plane with two powerful jet engines, as a result it gives us one of the strongest development pipelines among Japanese pharma companies. With regard to global development, Chugai develops up to Phase II proof of concept and then in principle these projects are licensed to Roche outside Japan [Chugai retains certain European co-promotion rights], or if Roche does not take them up they will be out-licensed to a third party for late development worldwide, which is very costly. Through this way, Chugai will be able to develop projects in a speedy and cost effective manner, and it allows investment in basic research and early development. We also participate in Roche global clinical studies in a cost-effective way. In biomanufacturing, Chugai has a total of 130,000l fermentation capacity, which is the top in Japan. We collaborate with Roche and Genentech in biomanufacturing in providing extra and backup capacity for the group in case of any emergency. The overall R&D spending of Roche is around JPY1tn a year, and we can use Roche’s global sales and marketing infrastructure, which saves us the huge expenses needed to build this up. Because of the patent cliff, many Japanese companies have had a problem [with costs] having to reduce their sales forces.

Q:Will the shape of the alliance or holding ever be changed?
A: I don’t think so. You see, both sides agree the alliance has been a tremendous success in terms of Chugai’s financial performance and research productivity, so there are no reasons to change the basic framework. Genentech was quite different, as there were two organizations in the US, so it made sense to combine them. But in Japan, Chugai acquired Roche Japan 15 years ago, so the situation is quite different from the Genentech case. [Note: Roche currently owns 59.9% of Chugai, and as part of the agreement agreed to maintain Chugai's listing in Tokyo, although there are no restrictions on ownership increase through Chugai share repurchase. Chugai's expense to revenue ratio has improved from 54% at the start of the alliance to around 33% now.]


Q:What is the main strategic in-house R&D focus over the mid-term?
A: We are focused on three research modalities – small, mid-size and large molecules. Chugai continues to develop in-house antibody engineering technologies such as recycling and bispecific antibodies. That’s a great talking point. Also we are now working to establish mid-sized molecules over the past 10 years. [A clinical candidate is expected to be selected before the end of IBI 18.] Chugai’s focus is technology-driven, not therapeutically driven, research for novel drug targets and unmet medical need. Hemlibra is a good example – we have never before been involved in hemophilia treatment but it came out of this approach. For commercial areas, we focus on oncology, bone and joint disease, and renal disorders, so we are number one in oncology and the hospital market segment in Japan.