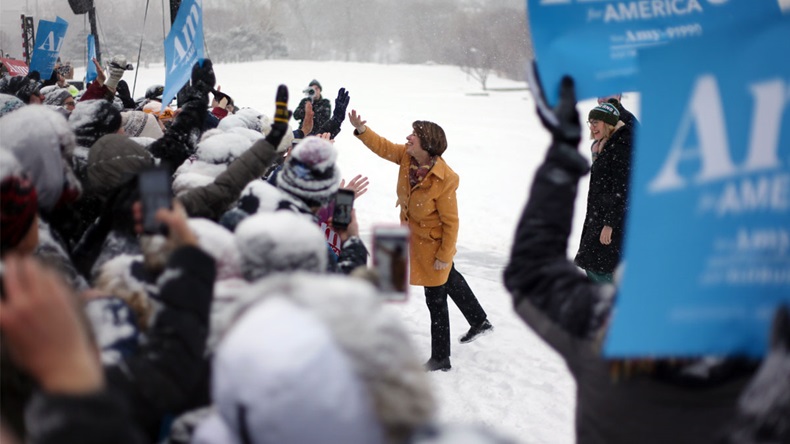 AMY KLOBUCHAR, WHO ANNOUNCED HER PRESIDENTIAL CANDIDACY IN SNOWY MINNESOTA FEB. 10, IS WORKING TO COSPONSOR A DEVICE TAX REPEAL BILL IN THE SENATE

Efforts to repeal the medical device tax are again gaining steam in Congress as lawmakers in both chambers work to develop and cosponsor bills that would effectively kill the tax before it returns in 2020.

Rep. Ron Kind, D-Wisc., circulated a “Dear Colleague” letter to other House Lawmakers Feb. 13, asking them to cosponsor a bill that would fully repeal the 2.3% medical device excise tax that was instituted to raise funds for the Affordable Care Act. Similarly, Sen. Pat Toomey, R-Pa. and chair of the Senate Finance Committee, is working to sponsor a bill to repeal the tax with Sen. Amy Klobuchar, D-Minn., who announced her candidacy for the US presidency on Feb. 10.

Klobuchar has led the effort on the Democratic side to repeal the device tax in past Congresses and played an important role in gaining the current moratorium on the tax, which lasts through the end of this year. She has been praised by industry lobby groups such as AdvaMed for pushing the issue.

But with her move into a high-profile presidential campaign, there have been rumors she could back away from the issue to establish her bona fides as a supporter of the Affordable Care Act, which the device tax was enacted to help fund. Most recently, the Daily Beast reported that Klobuchar was no longer going to cosponsor bills to repeal the device tax because she is concerned her close association with the medical device lobby could be harmful to her presidential ambitions.

But rather than pull away from the issue, several sources tell Medtech Insight that Klobuchar is now working with Toomey to cosponsor the bill. The sources, who spoke on background, did not provide any detail on when the bill would be floated or any details that have so far been hashed out.

This isn’t the first time Toomey has sponsored a device tax repeal bill. He cosponsored a similar bill with Sen. Chuck Grassley, R-Utah, back in 2016. At the start of the year, Grassley took over the Finance Committee and vowed to cosponsor any medical device repeal bill that eventually comes across his desk. (Also see "New Finance Chair Grassley Will Push Device Tax Repeal, Try To Lower Health-Care Costs" - Medtech Insight, 14 Jan, 2019.)

In the House, Kind, who is chair of the Health Subcommittee of the House Ways and Means Committee, already has the backing of Reps. Jackie Walorski, R-Ind.; Scott Peters, D-Cali.; and Richard Hudson, R-N.C.

“Given that this tax applies to revenues, not profits, it is extremely punitive to medical technology innovators,” said Kind in a letter urging lawmakers to support his bill. “Since the inception of the medical device tax, there has been growing bipartisan support to end this tax on innovation and it has been suspended multiple times by Congress.”

He notes most recently a bill to repeal the tax passed in the House by a vote of 283-132 but failed to pass the Senate.

Responding to Kind’s letter, AdvaMed CEO Scott Whitaker issued a statement thanking the House lawmakers and their staff for championing its cause, arguing the tax adversely affects R&D, jobs and patient care.

“We simply can't allow this onerous tax to go back into effect at the end of the year, hurting American patients and American innovation; let's repeal it once and for all now,” he added.

AdvaMed tried to get a full repeal of the tax during the lame duck session in the closing weeks of 2018, which the group said was likely their best opportunity for repeal, before a new Congress took over. (Also see "'Lame Duck' Bill Would Halt Device Tax Until 2025" - Medtech Insight, 10 Dec, 2018.) Industry did successfully lobby at the start of last year for the current two-year moratorium on the tax, but lobby groups had initially tried to convince Congress to pass a five-year suspension to improve predictability for devoting resources to research and development, and hiring staff.

While repealing the device tax has strong bipartisan support in both chambers, detractors raise concerns that no pay-for has been identified to fill the gap in funding that the lack of the tax dollars would create.