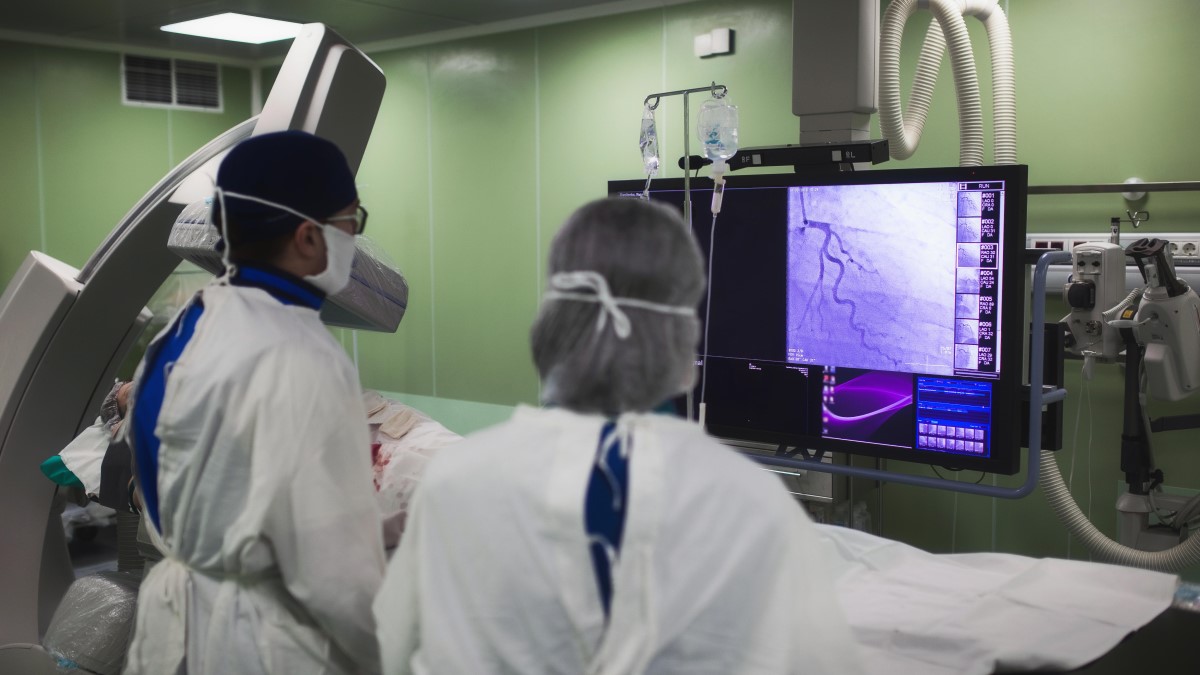 Approved by the US Food and Drug Administration in February 2021,the Shockwave IVL (intravascular lithotripsy) System along with the Shockwave C2 Coronary IVL Catheter applies a technology used for decades to treat kidney stones – lithotripsy – to open blockages in arteries that have become too hard for traditional angioplasties to work effectively. (FDA Approves Shockwave Coronary Intravascular Lithotripsy System)

“With this device we’ve taken lithotripsy, miniaturized it, and designed it for local delivery,” said Robert Fletcher, vice president of marketing and market access at Shockwave Medical.

This novel approach has changed the paradigm in the treatment of clogged arteries because it mitigates some of the inherent risks in other procedures for severe calcifications, such as when bifurcation is involved, which is where a vessel  being treated has a side branch attached, said Robert Riley, an interventional cardiologist specializing in high-risk coronary artery disease and cardiogenic shock at The Christ Hospital in Cincinnati.

“When we use these tools to treat calcium there, you can actually shut off that side branch, which is a big deal. It causes a heart attack,” Riley told Medtech Insight. “We didn't really have a solution until intravascular lithotripsy or Shockwave came along. And the reason that was helpful is because there's nothing else like it. It changes the calcium compliance in a way the previous tools tried to do but really couldn't.”

“It solved a problem that we simply didn't have a solution for.” – Robert Riley.

Though Shockwave’s technology builds on the treatment for kidney stones, in which the calcifications in the kidney are pulverized, this new therapy differs in that it only cracks the calcium, allowing the angioplasty to pass through for better stent placement. Not breaking up the calcium also prevents shattered deposits from flowing elsewhere through the bloodstream, which Riley said can cause other complications, such as creating more blockages.

During the Shockwave procedure, which Riley said he performs on a weekly basis in his practice, sonic pulses interact selectively with the diseased calcified tissue while not harming the healthy tissue. These pulses create microfractures in the calcium that allow the physician to get the artery back to its proper size so the stent can then be properly placed and fitted.

“The nice thing about this is that we're used to using balloons, which is what the Shockwave is. It's just a balloon. We do it all the time to treat blockages,” Riley said.

“It's not something new we have to learn, be trained on, be scared of. It's a simple balloon that goes in does its thing, and then it comes out and then you stent.”– Robert Riley.

Riley, who cited a study published in the Journal of Endovascular Therapy and another in the Journal of the American College of Cardiology showing the safety and efficacy of the Shockwave system, said an added benefit of the device is that it’s physician friendly.  “It’s easy to use with no learning curve. And that's so dramatically different from any of the other solutions we have for these types of blockages,” he said. “It made us feel really comfortable about getting that out into everybody's hands quickly.”

The device was in use in Europe before receiving FDA approval in February, and Fletcher said some 30,000 patients have already received the new therapy and now that it’s available in the US – the 51st country to have it – that number will likely go up.

According to Fletcher, an estimated one million percutaneous coronary interventions (angioplasties with stents) are performed annually in the US. Of those patients, the company estimates 30% would potentially benefit from the IVL treatment due to the severity of their calcification.

Riley agreed: “My gut is that an increasing segment of the population will utilize this device, which is why I think the FDA saw the need. They saw the need to get this looked at quickly, make sure it's safe, make sure it's technically feasible. We get good success rates and then get it in our doctor's hands really quickly, because there are a lot of patients that need this and that is only going to continue to increase.”