Biosimilars: US FDA Education Campaign Is Non-Committal On Non-Medical Switching

Substituting a biosimilar for a reference product is a state issue and outside agency's purview, FDA says. 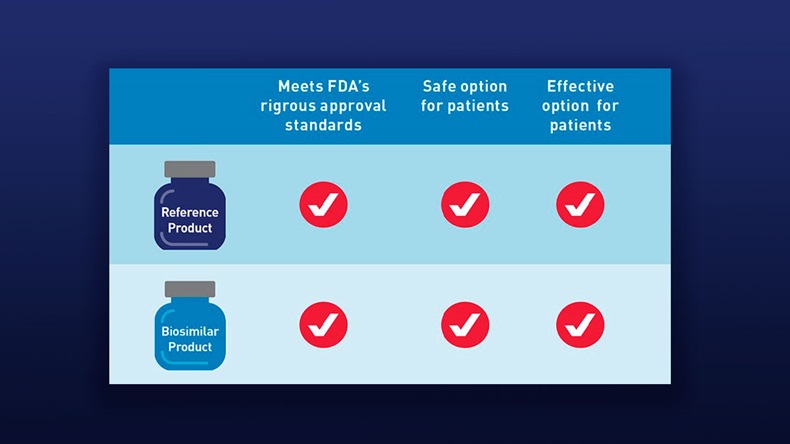 The US FDA's new biosimilar information campaign does not tackle the non-medical switching controversy, but does attempt to dispel concerns about the difference between biosimilar and interchangeable products.

The effort, targeted at health care providers, is an attempt to answer questions about biosimilars and interchangeable products, including approval standards and development requirements.Commissioner Scott Gottlieb said in an Oct. 23 blog post that it is important providers are informed about the products because of their potential to lower health care costs.

But FDA's package of materials does not definitively address one controversial topic that stakeholders and sponsors have raised, a practice termed "non-medical switching."

The issue involves patients stable on the reference biologic changing to the biosimilar for non-clinical reasons, even though the product has not been ruled interchangeable. Stakeholders have argued that payers could force such moves if biosimilars are cheaper. They also have asked the agency to issue a statement against the practice. (Also see "Biosimilar Non-Medical Switching: Advocacy Groups, FDA Advisors Push For Action" - Pink Sheet, 14 Jul, 2016.)

FDA chose not to address the issue in the education campaign. The agency said that a review of a proposed biosimilar does not include a determination of whether it could be interchangeable with the reference product at the pharmacy.

FDA added that substituting a biosimilar for a reference product at the pharmacy "is a matter of state pharmacy law and is a decision that is generally outside of FDA's regulatory role." The agency also said that several states have laws governing pharmacy-level substitution and that providers should consult their state pharmacy board.

FDA did say that approved biosimilar and interchangeable products could be used in patients previously treated with the reference product, as well as those who are treatment naïve.

Some have voiced concerns about non-medical switching during FDA advisory committee meetings on biosimilar products. During a hearing for Hospira Inc.'s proposed biosimilar of Amgen Inc.'s Epogen/Procrit (epoetin alfa), an advisory committee member suggested dialysis centers looking for savings could switch to the biosimilar, forcing many patients off the reference product at the same time. (Also see "Will Epoetin Biosimilar Serve As Non-Medical Switching Case Study?" - Pink Sheet, 15 Jun, 2017.)

Hospira, which now is part of Pfizer Inc., received a complete response letter for the product due to manufacturing problems. (Also see "Pfizer’s EPO Biosimilar Stalls In US On Hospira Compliance Woes" - Pink Sheet, 22 Jun, 2017.)

The agency wrote in the education materials that an interchangeable product could be substituted for the reference product by a pharmacist without involving the prescriber.

FDA also tried not to discount those products ruled biosimilar, saying that "FDA undertakes a rigorous and thorough evaluation to ensure that all products, including biosimilar and interchangeable products, meet the agency's high standards for approval."

Some biosimilar sponsors have been informed of a campaign directed at providers implying that interchangeable products are superior and to not use biosimilars until they are ruled interchangeable. (See sidebar.)

FDA told the Pink Sheet it is targeting the campaign at practitioners most likely to prescribe biologics, including rheumatologists, dermatologists, oncologists, hematologists, nephrologists and gastroenterologists.

The agency purchased advertisements in several medical journals, including the American Journal of Gastroenterology, Journal of the American Academy of Dermatology, Arthritis and Rheumatology, Blood, CA: A Cancer Journal for Clinicians, and the Journal of Managed Care Pharmacy. Several the journal ads also include bonus conference distribution, the agency said.

FDA also told the Pink Sheet that it will continue working on the campaign throughout 2018, including developing material for patients that likely will be available late next year.

Gottlieb wrote in the blog post that the agency plans additional research with providers "to learn more about the types of information prescribers need to properly communicate with their patients about biosimilars."

FDA is presenting the campaign as another part of its efforts to help lower health care costs. Gottlieb wrote in the blog post that biosimilars "can offer more competition and options for patients" and "potentially reduce costs for consumers by creating price competition for products that previously faced few market competitors."

Indeed, FDA said in the material that "biosimilar manufacturers do not need to conduct as many expensive and lengthy clinical trials, potentially leading to faster access to these products, additional therapeutic options, and reduced costs for patients."

In describing extrapolation, which allows a biosimilar to be approved for multiple reference product indications without conducting clinical trials in each, the agency said the concept "is critical to the goals of an abbreviated pathway – improving access and options at a potentially lower cost."