As clinical and diagnostic parameters evolve over time, Trialtrove strives to reflect them in our patient segments and disease coverage.  The Assessment in SpondyloArthritis International Society (ASAS) updated their guidelines in May 2009 [1] to describe two forms of axial spondyloarthritis (SpA): ankylosing spondylitis (AS), also known as radiographic SpA, and non-radiographic spondyloarthritis. The non-radiographic spondyloarthritis (NR-axSpA) form is recognized by MRI detection of active inflammation, in the absence of radiographic evidence of disease, and has now been carved out in the Other Inflammatory Arthritis (OIA) disease module as a new patient segment.

The numbers of Phase II–III, industry sponsored trials (started since January 1, 2008), enrolling either axial SpA segment (AS or NR-axSpA), are profiled in Figure 1.  Broadly speaking, the major focus during this period was on AS trials, with 47 trials enrolling only AS patients.  However, the expansion of ASAS guidelines to include both NR-axSpA and AS is evident in trials initiated since 2009, and seven trials enrolled only NR-axSpA patients. These NR-axSpA focused studies include the pivotal trials for adalimumab (2009), etanercept (2011), and golimumab (2012), while those initiated in 2015 and 2016 are primarily pivotal studies for other classes of drugs (IL17 and IL12/23 antagonists).  Three trials that also included PsA subjects are studies that have outcomes shared across all three SpA indications (for example, entheritis, biodistribution). The extensive overlap in patient segmentation in this trial set underscores the considerable overlap of symptoms across axial and peripheral SpA. 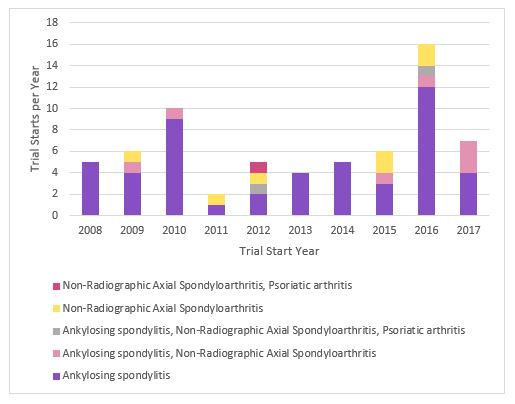 The Phase II–III trials, started since January 1, 2009, were further evaluated for the hot mechanisms of action (MOA) of the drugs under industry development for NR-axSpA.  That search returned 59 trials for MOAs with at least two axial SpA (AS, NR-axAsP) trials. Figure 2 illustrates that the most frequent MOA is TNF alpha antagonist. Considering that NR-axSpA and AS are closely related, it is not surprising that the TNF alpha antagonists represent the most frequently evaluated MOA as label expansions were made into the NR-aSpA indication.  The next most investigated MOA is the IL17 antagonists, with five studies including NR-axSpA patients.  One trial each for IL12/23, and IL23 antagonists in NR-axSpA were initiated during this period, as well.  Each of these MOAs are well established for their efficacy in other Autoimmune/Inflammation indications. Specifically, the IL17 and IL12/23 antagonists were originally approved for psoriasis, and later for PsA.  Other MOAs that remain active in axial SpA trials are PDE4 inhibition and JAK1 inhibition, but neither has yet initiated development in NR-axSpA. Development of IL6 pathway antagonists (sarilumab, tocilizumab) in AS is no longer active, so we would not expect their development in NR-axSpA. 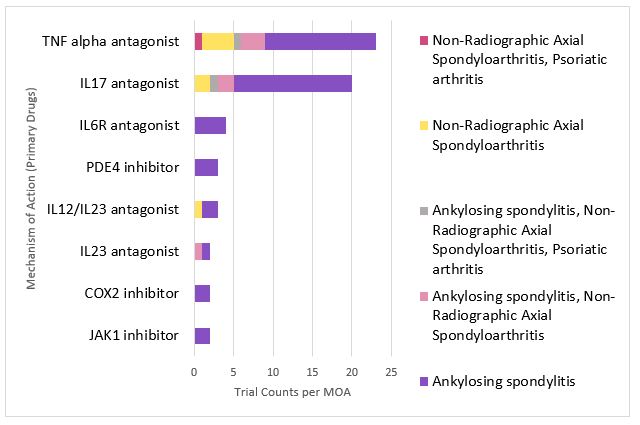 An overview of the launched and late stage (Phase III) drugs for NR-axSpA, and their Phase III trial primary endpoints, is provided from Pharmaprojects and Trialtrove data (Table 1). The program status for all OIA indications is included to highlight those indications that were originally approved, or planned to be approved in parallel development, for NR-axSpA.  With the exception of infliximab, all of the TNF alpha antagonists are approved in the EU for NR-axSpA.  Only certolizumab pegol (Cimzia) also gained approved in the US, based on ASAS20 primary endpoints having been met [2].  The primary endpoint for the single adalimumab pivotal trial (ABILITY-1) was ASAS40 improvement, and FDA advisors found in 2013 that the study did not demonstrate a clinically meaningful benefit.  Both etanercept and infliximab phase III trials also had ambitious primary endpoints (ASAS40 and partial remission, respectively), and were not filed in the US for NR-axSpA, despite reporting positive outcomes in Phase III [3] [4]. In addition, Johnson & Johnson (J&J), in partnership with Merck & Co., reported in May 2013 their plans to file for golimumab in the US for the 2013–2017 timeframe. However, no updates have been made to this projection recently, and the program was not mentioned during a recent J&J investor update [5].

The recent enhancement in Trialtrove, which indexed NR-axSpA as a patient segment in OIA, facilitates evaluation of programs focused on this earlier form of axial SpA.  As profiled here, many trials enroll patients across the OIA segments, and the TNF alpha antagonists have been of highest interest in these indications, with expanded indication approvals up through 2015.  A recent review of outcomes for both AS and NR-axSpA trials, evaluating TNF alpha antagonists, concluded that 30–40% of patients do not reach a good clinical response with these agents [6].

Drugs targeting IL17 and IL12/23 pathways are already well advanced in Phase III, and could provide alternative therapies for NR-axSpA, including for the treatment refractory population.  J&J’s ustekinumab is projected to complete a pivotal NR-axSpA trial in 2017, having a primary endpoint of ASAS20.  Novartis, Eli Lilly, and Kyowa Hakko Kirin are running Phase III studies for their IL17 pathway antagonists in NR-axSpA, and these pivotal trials aim to achieve the more ambitious, ASAS40, primary endpoint.  Among these IL17 pathway antagonists, Novartis’ program is the most advanced, and is running two additional Phase III studies in NR-axSpA with alternative primary endpoints: reduction in Achilles tendon entheritis and pain reduction. All these pivotal trials are placebo controlled, suggesting that comparisons to approved the TNF alpha antagonists are likely to be tested later, in Phase IV.

Not only is the broad SpA field expanding through more granular definition of disease parameters, but drugs, already approved in other A/I diseases, are being expanded into this evolving clinical space of SpA.