The FDA Oncology Center of Excellence’s ‘industry-wide evaluation’ of accelerated approvals has already led to withdrawals of four PD-1/PD-L1 inhibitor indications, with the Oncologic Drugs Advisory Committee set to review another six in late April. Over the next two years, an additional five indications may be up for review.

Since the US Food and Drug Administration introduced the accelerated approval program in 1992, the agency has granted more than 250 approvals under this expedited pathway. The program has brought a number of important therapies to market earlier than would have been expected under the regular review process, including cancer immunotherapies.

However, despite the high-profile failure of several confirmatory trials for Genentech’s PD-L1 inhibitor Tecentriq (atezolizumab), Merck & Co’s PD-1 inhibitor Keytruda (pembrolizumab), and Bristol Myers Squibb’s PD-1 inhibitor Opdivo (nivolumab), none of the indications at issue for these checkpoint inhibitors were withdrawn from the market immediately after the trials failed to confirm clinical benefit.

The Oncology Center of Excellence recently has initiated an extensive evaluation of accelerated approvals in oncology focused on indications where confirmatory trials failed to show benefit, and the Oncologic Drugs Advisory Committee will consider six of these indications for four drugs during a three-day meeting this month.

The OCE’s comprehensive review has thus far been focused on PD-1/PD-L1 inhibitors, a class of drugs that has become ubiquitous across oncology indications over the last seven years.

Excluding Keytruda’s recent spate of accelerated approvals for a dosage change, there have been a total of 33 approvals for the PD-1/PD-L1 inhibitors through the expedited pathway as of 31 December 2020, affecting Keytruda, Opdivo, Tecentriq, AstraZeneca’s Imfinzi (durvalumab), and EMD Serono/Pfizer’s Bavencio (avelumab). Through the end of 2020, 10 of these indications had been converted.

Thus far, Bristol Myers Squibb and Merck & Co have converted Opdivo and Keytruda’s combined six accelerated approvals in melanoma and non-small cell lung cancer, both indications that contribute significantly to revenue, into full approvals. Opdivo is approved both as a monotherapy and as part of a combination with Bristol Myers Squibb’s CTLA-4 inhibitor Yervoy (ipilimumab).

Keytruda’s accelerated approvals in two hematological indications – refractory classical Hodgkin’s lymphoma and refractory primary mediastinal large B-cell lymphoma (PMBCL) – have been converted to full approvals, as has the approval in recurrent or metastatic squamous cell carcinoma of the head and neck.

EMD Serono converted Bavencio’s accelerated approval for the second-line treatment of locally advanced or metastatic bladder cancer to a full approval in June 2020 based on data from the Phase III JAVELIN Bladder 100 trial.

Bristol Myers Squibb’s voluntary December 2020 withdrawal of Opdivo’s accelerated approval for the treatment of small cell lung cancer was the first withdrawal, voluntary or required, of an accelerated approval for a PD-1/PD-L1 inhibitor. Bristol Myers Squibb’s action was followed by an additional three withdrawals: from AstraZeneca for Imfinzi in bladder cancer; from Merck & Co for Keytruda in small cell lung cancer; and from Roche for Tecentriq in bladder cancer. 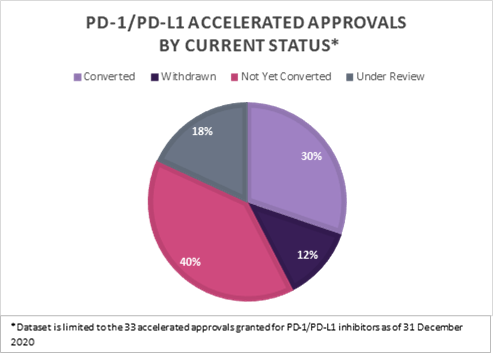 Excepting the indications currently under ODAC review, there are three PD-1/PD-L1 inhibitors with accelerated approvals granted as of 31 December 2020 with indications that have not yet been converted: Keytruda, Opdivo, and Bavencio.

… But What Comes Next?

The FDA typically requires postmarketing studies or clinical trials to demonstrate and confirm clinical benefit for drugs approved under the accelerated approval pathway. There are an additional five indications – two for Opdivo and three for Keytruda – with projected postmarketing requirement completion dates before the end of 2023.

Bavencio’s only accelerated approval indication that has not yet been converted is for the treatment of metastatic Merkel cell carcinoma, and the projected postmarketing requirement completion date is December 2026.

The postmarketing requirement for Opdivo’s approval as an adjuvant treatment for patients with
high-risk, invasive urothelial carcinoma requires Bristol Myers Squibb to submit a final report with datasets from the Phase III CA209274 trial examining the effect of Opdivo on disease-free survival.

Positive data from the Phase III CA209274 trial evaluating Opdivo after surgery in patients with
high-risk, muscle-invasive urothelial carcinoma were announced in September 2020. In the study, Opdivo demonstrated a statistically significant improvement in disease-free survival over placebo, both in the intent-to-treat population and in patients with tumors that express PD-L1. Based on these data, it seems unlikely that Opdivo’s label in this indication will be withdrawn in the future.

However, not all postmarketing requirements include references to specific trials.

In the case of Opdivo’s approval in patients with microsatellite instability high (MSI-H) or mismatch repair deficient metastatic (DMMR) colorectal cancer who have progressed following treatment with fluoropyrimidine, oxaliplatin, and irinotecan, the FDA only required a final report from “trials conducted to verify and describe the clinical benefit of nivolumab.”

The dataset must include data from at least 150 patients who were enrolled in trials sponsored by Bristol Myers Squibb, and the patients must have been followed for at least 12 months from the onset of response.

The Phase III KEYNOTE-826 study is the confirmatory trial to support Keytruda’s accelerated approval as a treatment for recurrent or metastatic cervical cancer patients with disease progression on or after chemotherapy whose tumors express PD-L1 (CPS >1). It is expected to be completed in late November 2022. The postmarketing requirement requires Merck & Co to submit analyses and datasets with a final report for PFS and OS from the trial, which is testing Keytruda against standard-of-care chemotherapy.

Merck & Co recently reported positive data from the Phase III KEYNOTE-775 trial of Keytruda and Lenvima in patients with advanced endometrial carcinoma following one prior platinum-based regimen in any setting. In this trial, the combination of Keytruda and Lenvima demonstrated a statistically significant and clinically meaningful improvement in the primary endpoints of PFS and OS as well as the secondary endpoint of ORR versus chemotherapy against the comparator arm, the treatment of physician’s choice of doxorubicin or paclitaxel.

The final reports will likely be necessary to fulfill the postmarketing requirements, and the trial is expected to be completed in March 2023. Given the data seen thus far though, the path to a full approval for this combination seems relatively straightforward.

Accelerated approvals for PD-1/PD-L1 inhibitors that have not yet converted, and projected postmarketing requirements completion dates