Do You Know – the Other Diseases looking at Cognitive Function?

The decline of cognitive function in the progression of Alzheimer’s disease is well recognized as a primary focus in disease treatment. What may be surprising is the focus on cognition measures in the treatment of other diseases. A Trialtrove search of planned and ongoing clinical trials using the newly added CNS patient segment, Cognitive Function, reveals the diseases with the most activity in evaluating these measures are multiple sclerosis (MS), schizophrenia and Parkinson’s disease (PD). 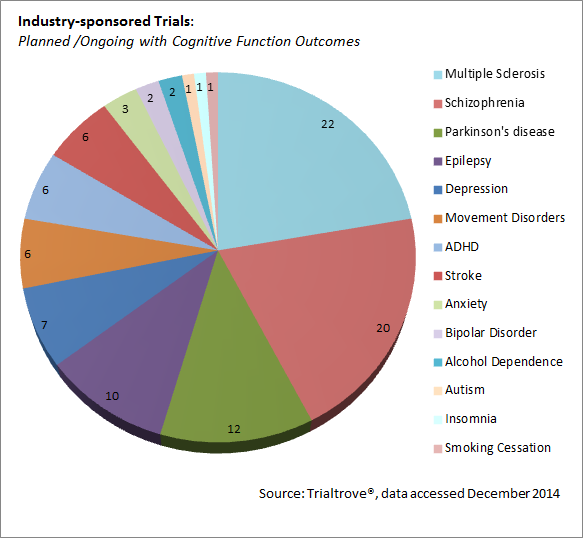 Why is recognition and treatment of cognition most prevalent in the top three diseases? Recent improvements in evaluation techniques can distinguish cognitive dysfunction from other common symptoms, such as depression and fatigue, thus supporting the utilization of cognitive function outcomes in prospective clinical studies.

The occurrence of severe cognitive dysfunction is prevalent in the secondary progressive form of MS.  Memory dysfunction is also apparent in 20-40% of MS patients, and other cognitive deficits, including impaired planning skills and verbal fluency, are also observed.  For schizophrenia, cognitive decline previously was thought to occur primarily in elderly patients. However significant cognitive impairment is now reported in 75% of all patients assessed (regardless of age), affecting attention, motor skills, executive function, as well as influencing social and functional outcomes. And last, but certainly not least, a reduced efficacy of dopaminergic medications to treat Parkinson’s disease-associated cognitive dysfunction may be integrally associated with depression, thus making it of added importance to track changes in cognitive function in PD trials.1