The recent discontinuation of Eli Lilly’s tabalumab, a B-cell activating factor monoclonal antibody (anti-BAFF), for the treatment of systemic lupus erythematosus (SLE), quickly followed the completion of two pivotal trials, ILLUMINATE 1 and 2.  The approval of the first successful targeted SLE therapy in March 2011, Human Genome Sciences/GlaxoSmithKline’s Benlysta (belimumab), raised hopes that BAFF inhibition could be leveraged further for improved therapies.  Tabalumab neutralizes the membrane-bound form of BAFF, in addition to the soluble form targeted by Benlysta, and would theoretically be expected to mediate better efficacy through a proven pathway.  The higher dosing regimen for tabalumab reached its primary endpoint for efficacy in one of the ILLUMINATE trials, and safety was not issue for any studies to date.  How might trial design have played a role in returning disappointing efficacy outcomes for a proven mechanism of action?  Analysis of trial details from Trialtrove (accessed October 2014) provides a snapshot of the study design and outcomes for the pivotal trials in these programs, for comparison. 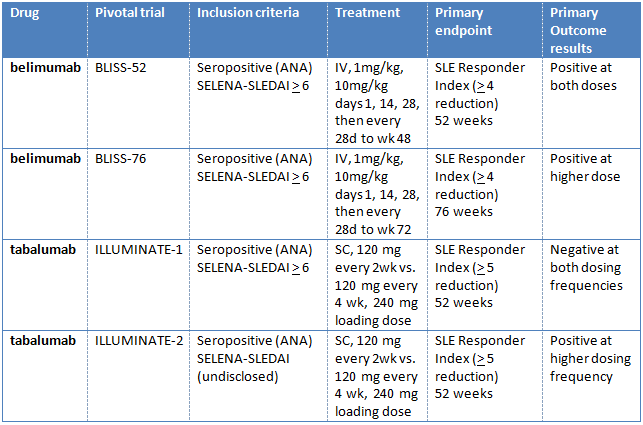 Lilly’s program followed the inroads made with Benlysta’s trial design by targeting patients who were seropositive SLE at screening with active disease of SLEDAI > 6, and by employing a novel composite SLE responder index (SRI), pioneered by HGS/GSK.  However, Lilly’s SLE phase III program began directly after their phase III rheumatoid arthritis trials terminated and the SLE trials utilized the higher dosing regimen evaluated in the RA studies.  No phase II studies were performed in SLE patients.  In addition, Lilly’s primary endpoint for tabalumab was set higher than Benlysta’s (SRI reduction of > 5 vs. > 4).  The careful post hoc analyses of phase II Benlysta trial results were critical for designing its successful phase III program and tabalumab’s program did not include such trials.  Are current trials for novel drugs optimizing study design features? 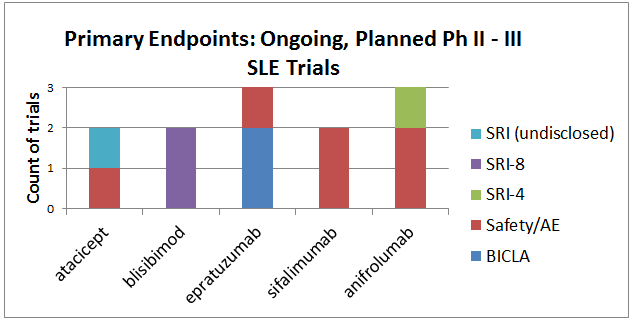 Active trials for BAFF inhibitors (atacicept, blisibimod), an additional B cell targeting therapeutic (epratuzumab, anti-CD22) and two type I interferon (IFN) pathway antagonists (sifalimumab, anifrolumab) reflect customized efficacy endpoints and a focus on safety.  UCB’s epratuzumab is most advanced in development and is evaluating efficacy with a unique composite index, BICLA, in patients with the same inclusion criteria as Benlysta’s pivotal trials.  Blisibimod, a peptibody in phase III development by Anthera, was found by post-hoc analysis of the phase II study PEARL-SC to have significant efficacy in SLE patients with the most severe disease. Hence, phase III studies target the SLE population with SLEDAI > 10 and also set a higher mark for efficacy, SRI-8.  Merck/Serono’s atacicept program experienced setbacks in phase II due to safety issues, but now is moving forward in the seropositive, active SLE population after post-hoc evaluation of earlier study results.  AstraZeneca’s type I IFN pathway antagonists are utilizing IFN responsive gene arrays to identify subpopulations that are most responsive to treatment.  Ongoing IFN antagonist trials are proceeding carefully with a phase III decision for sifalimumab pending and anifrolumab heavily focused on safety outcomes.  Clearly, insights gained from phase II studies now are guiding the design of phase III studies and even among the BAFF inhibitors this appears to be important.  Lilly’s tabalumab program did not follow this paradigm, but the post-hoc analyses for the ILLUMINATE studies will be interesting to see what future there might be for tabalumab in SLE. The ongoing programs are targeting responsive patient subsets with this heterogeneous disease, mirroring the fine-tuning approach taken by the Benlysta program.