Continuing from part 1 of this series (https://pharmaintelligence.informa.com/resources/product-content/part-1-current-status-of-ebola-vaccine-development), which addressed the clinical development of a vaccine for Ebola virus disease (EVD), part 2 will be assessing the status of treatments for EVD.

Currently there are no approved therapeutics available for prevention, post-exposure, or treatment of EVD. The 2014 outbreak of Ebola virus disease has had over 24,000 estimated cases and a case fatality rate among hospitalised patients of over 60% in the three countries most affected by the virus (Liberia, Guinea and Sierra Leone) (http://apps.who.int/ebola/current-situation/ebola-situation-report-11-march-2015). Existing treatment options for EVD patients are limited to symptom management and supportive care of complications as well as administration of convalescent whole blood or plasma, the efficacy of which has not been proven.

With the pressing need for development of a treatment for EVD, a number of companies have advanced their candidates into the clinic and others have screened their compound libraries for antiviral candidates.

As of 17 March 2015, there are six treatments in clinical development for EVD. Three are in Phase II and three are in Phase I. Of these, Favipiravir, a RNA polymerase inhibitor developed by Toyama, is in the unique position of being already approved for influenza treatment in Japan and having undergone extensive Phase III clinical trials for the treatment of influenza infection. Favipiravir is currently undergoing Phase II efficacy testing for EVD treatment in Guinea and has been produced in large quantities since March 2014 when it was approved for stockpiling against an influenza epidemic. If efficacy is proven against EVD, large quantities could be made available in short order.

The other two most advanced EVD treatments are zMapp, Mapp biopharmaceutical’s cocktail of three humanised monoclonal antibodies, and TKM-Ebola-Guinea, Tekmira Pharmaceuticals’ RNAi therapeutic which has been modified to specifically target the 2014 Ebola Guinea strain. Both are undergoing Phase II efficacy trials in West Africa with results expected in mid-2015.

Since the beginning of the outbreak, there were a further two antiviral drugs in clinical trials for EVD which have since been discontinued. Brincidofovir, a DNA polymerase inhibitor developed by Chimerix, reached Phase II clinical trials for EVD in Liberia but Chimerix discontinued its development for EVD due to a fall in patient numbers, though it continues in Phase III trials for the treatment and prevention of adenovirus and cytomegalovirus. TKM-100802 (TKM-Ebola), a RNAi therapeutic developed by Tekmira, was placed on a partial clinical hold by the FDA in August 2014 after cytokine storm concerns in its Phase I trial. TKM-Ebola-Guinea is a development of TKM-100802 which was used in 2014 to treat several patients with EVD under FDA emergency protocols for use of an investigational drug.

The preclinical candidates are mostly evenly split between synthetic compounds and antibodies (Figure 1). 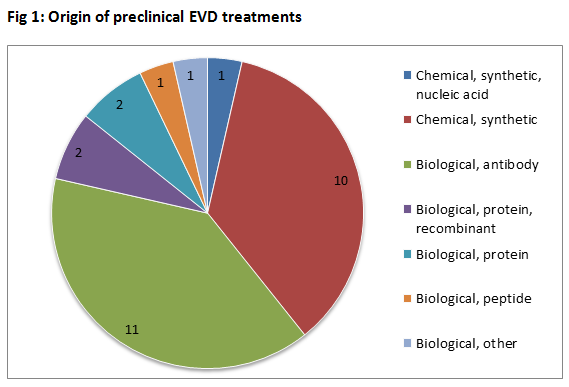 The scale of the pharmaceutical industry’s response to the Ebola outbreak can be seen in the number of new preclinical programs for EBV treatment. Seventeen of the 28 preclinical candidates have been freshly identified since the beginning of the outbreak in February 2014 and a further six are older programs that have restarted development. This marks a 400% increase in the number of EVD treatment candidates in development since the beginning of the outbreak.

Given the ongoing nature of the outbreak, the speed at which many EVD treatments are advancing, and the statements from numerous drug regulatory agencies that new treatments will be prioritised and assessed as a matter of urgency, 2015 is expected to be perhaps the most active year for EVD treatment development yet.


Built by experts. Made for experts.