With the recent launch of Regeneron/Sanofi’s Praluent® and Amgen’s Repatha®, which are both fully human anti-PCSK9 monoclonal antibodies, it is interesting to consider the other molecular approaches being pursued in the burgeoning PCSK9 inhibitor arena.

There are currently 8 preclinical drugs and a total of 7 in clinical trials with the associated mechanism of action (MOA) of ‘PCSK9 inhibitor’. The majority are at Phase I, while there are solitary compounds at both Phases II and III: Eli Lilly’s monoclonal antibody candidate and Pfizer’s bococizumab, respectively. (Figure 1)

A total of 13 companies are involved in PCSK9 inhibitors research at preclinical and clinical trial stages. (Figure 2) Most drugs are under development as solo endeavours, however, one compound is a collaboration between Pfizer and Halozyme, while Alnylam is working on another candidate with Arbutus Biopharma and The Medicines Company. Affiris has the largest number of compounds in the pipeline with 4 candidates, while Pfizer comes in a close second with 3. 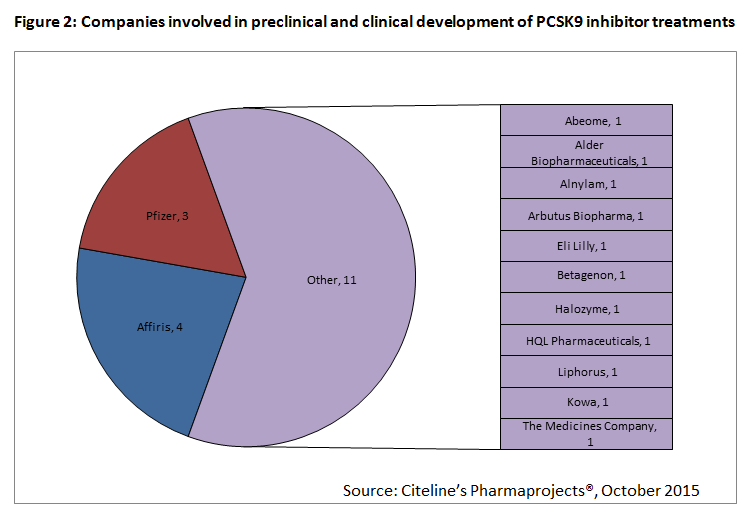 Pfizer, Eli Lily and Alder Biopharmaceuticals each have humanized monoclonal antibodies in various stages of research. As aforementioned, Pfizer’s bococizumab, which is being developed collaboratively with Halozyme, is furthest ahead at Phase III. Eli Lily’s humanized mAb started Phase II trials in July of this year while Alder Biopharmaceuticals’ compound currently remains in preclinical development. Meanwhile Abeome’s chimeric, monoclonal antibody candidate is also preclinical. These humanized and chimeric mAbs approaches differ from the fully human compounds of Praluent® and Repatha® and therefore could incur some issues related to safety and efficacy.

In contrast to the existing monoclonal antibody approach, Affiris is developing 4 vaccine candidates that could have an advantage in terms of longer term protection and perhaps increased compliance due to the lower frequency of dosing. Two of these vaccine candidates, ATH-04 and ATH-06, entered Phase I trials this year while a combination vaccine is currently preclinical. Another preclinical PCSK9 vaccine candidate comes from Pfizer.

Pfizer also has an oral, small molecule compound in addition to a vaccine candidate.  Betagenon too is developing its own oral small molecule, which has an additional MOA of AMPK activator. Small molecule approaches offer lower manufacturing cost advantages and in general, orally available tablet or capsules forms are preferred over injectables by patients. This preference for oral capsules and tablets can also lead to an overall increase in patient compliance, another advantage the small molecule approach would have over the rest of the PCSK9 inhibitor treatments which are to be administered as injections.

Looking at Pfizer’s PCSK9 pipeline in particular, it contains a monoclonal antibody in the form of bococizumab, a vaccine, and a small molecule candidate, making it the most varied company portfolio in this space in terms of drug types under investigation. If the PCSK9 target proves to be as efficacious as anticipated, having 3 different compound types in this area could be a very lucrative investment for the company.

A further alternative to monoclonal antibodies, small molecules and vaccines targeting PCSK9 comes from Alnylam in collaboration with The Medicines Company and Arbutus Biopharma.  ALN-PCS is an RNA interference molecule, currently at Phase I, which disrupts PCSK9 production via the RNA mechanism rather than inhibiting the PCSK9 protein itself. This variation in the molecular types of the candidates is summarized in the biological vs chemical origins of the candidates. 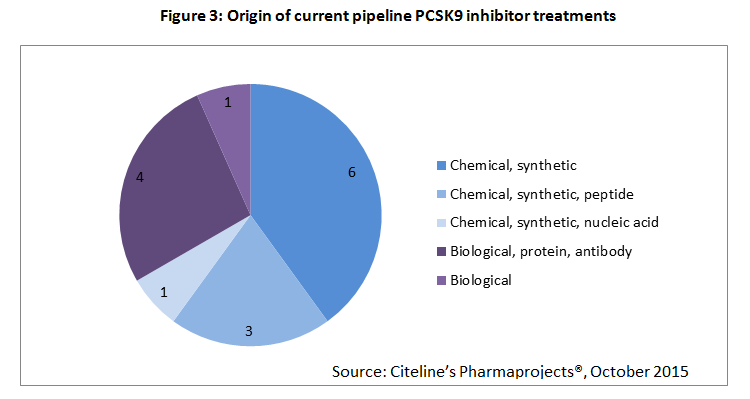 Figure 3 displays a slightly larger number of chemical synthetic molecules currently in the development pipeline, which potentially means that the PCSK9 inhibitor class may not always be dominated by monoclonal antibodies. With plenty of alternatives to the antibody approach in the pipeline, there certainly looks like there is a lot more to come from the new PCSK9 inhibitor class.