Pfizer Lines Up Trio Of US Biosimilar Launches 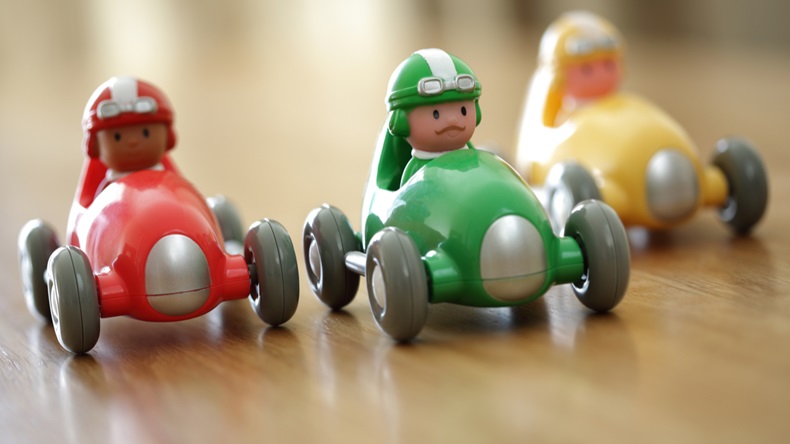 PFIZER EXPECTS WITHIN THE NEXT FEW MONTHS TO BRING THREE BIOSIMILARS TO THE US MARKET Source: Shuttershock

Pfizer plans to follow up its US introduction of its Zirabev (bevacizumab-bvzr) biosimilar at the end of this year by launching its Ruxience (rituximab-pvvr) biosimilar to Roche’s Rituxan in January 2020, followed on 15 February next year by rolling out its Trazimera (trastuzumab-qyyp) treatment for various cancers.

Trazimera’s market entry will come almost a year after Pfizer in March 2019 secured approval from the US Food and Drug Administration for the biosimilar to Roche’s Herceptin as a treatment for certain forms of breast and gastric cancer. (Also see "FDA Approves Pfizer's Trastuzumab Biosimilar" - Generics Bulletin, 12 Mar, 2019.)

Pfizer had already in late 2018 struck a global settlement on trastuzumab with Genentech and Roche on confidential terms. A similar confidential deal covered the prospective market entry of Ruxience, for which Pfizer had won FDA clearance in July this year.

Will Compete With Amgen On Trastuzumab And Bevacizumab
Amgen’s early-entry strategy found favor with some payers. Leading health insurer UnitedHealthcare decided from 1 October to give preferred coverage as specialty injectables under its commercial, community and Medicare Advantage plans to both Kanjinti and Amgen’s Mvasi (bevacizumab-awwb), currently the only biosimilar to Roche’s Avastin on the US market. In each case, United said Kanjinti and Mvasi were to be preferred by being used prior to Roche’s reference brands and before other trastuzumab or bevacizumab products in US states other than Arizona.  (Also see "US Insurer United Rewards Amgen’s Early Entry With Bevacizumab And Trastuzumab" - Generics Bulletin, 21 Aug, 2019.)

In late September, a Pfizer spokesperson had revealed to Generics Bulletin that the company planned to launch Zirabev on 31 December under the terms of a patent-litigation settlement.

“We have agreed to the terms of a settlement with Genentech and Hoffmann-La Roche in relation to Avastin (bevacizumab), which provides Pfizer with global licenses for its bevacizumab biosimilar,” the spokesperson clarified at that time. A brief joint stipulation of dismissal signed off by Delaware district court judge Colm Connolly stated that the litigants had mutually agreed to dismiss all claims and counterclaims in their dispute over 22 patents, as well as to bear their own legal costs.

Pfizer had already removed a hurdle to launching its Avastin rival by securing FDA approval for Zirabev at the end of June.

Settlement Is In Place For Rituximab
“We have agreed to the terms of a global settlement with Genentech, Roche and Biogen in relation to certain patents for Rituxan,” a Pfizer spokesperson told Generics Bulletin upon FDA approval. “Specific terms and conditions of the settlement are confidential. We are working to make Ruxience available to patients as soon as possible.”

The prospective January 2020 US market entry is considerably earlier than some observers had previously predicted. In March this year, a Morgan Stanley research note had suggested that Roche’s estate of 37 patents could delay biosimilar competition to Rituxan “until January 2021.”

Ruxience was the second biosimilar rituximab to be approved by the FDA, after the agency at the end of November last year cleared Celltrion’s Truxima (rituximab-abbs). While the Korean firm and commercialization partner Teva last year announced their own patent-litigation settlement agreement with Genentech, no launch date was disclosed.  (Also see "Celltrion’s Rituximab Biosimilar Is The First Greenlit By The FDA" - Generics Bulletin, 10 Dec, 2018.)

Retacrit Boosts Pfizer’s US Biosimilars Presence
Zirabev, Ruxience and Trazimera will add impetus to Pfizer’s US biosimilars business that is starting to pick up traction after a slow start from the brands that the US group gained through its 2015 takeover of Hospira.

In the third quarter of this year, Pfizer’s total US biosimilar sales climbed by 71% to $123m. In large part, that growth was due to a $42m contribution from Retacrit (epoetin alfa-epbx) after Pfizer launched the alternative to Janssen’s Epogen at a 33.5% list-price discount to the reference brand in November last year.  (Also see "Pfizer’s Retacrit undercuts rivals" - Generics Bulletin, 23 Nov, 2018.)

US turnover from Inflectra (infliximab-dybb) picked up by 8% to $77m as Pfizer continued to find making headway against Janssen’s Remicade difficult. The US total also includes a minor contribution from Pfizer’s Nivestym (filgrastim-aafi) alternative to Amgen’s Neupogen. 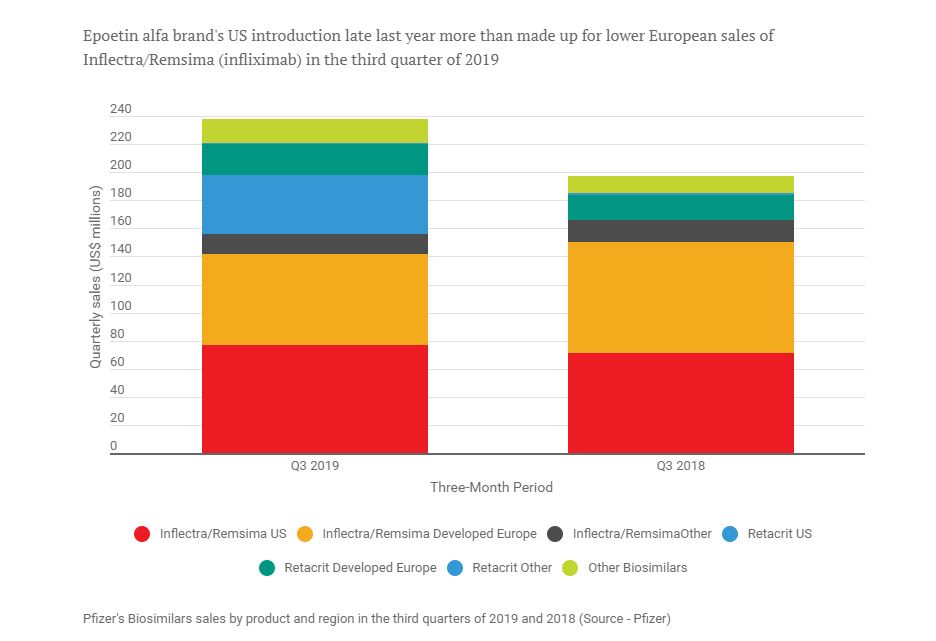 The addition of Retacrit meant that the US for the first time accounted for more than half of Pfizer’s global biosimilars sales in the third quarter that advanced by a fifth to $236m. that growth was tempered by a 9% reported, and 6% ‘operational’ constant-currency, decline in non-US markets to $113m that was attributable to Inflectra/Remsima turnover dropping by 18% as reported, and 15% operationally, to $78m. Non-US International Retacrit sales advanced by 14% as reported, and by 18% in operational terms, to $22m.

Well over four-fifths of Pfizer’s International biosimilars sales were generated in the group’s Developed Europe region – western Europe, Scandinavia and Finland – where turnover fell by 9% as reported to $97m on an 18% reverse to $65m for Inflectra/Remsima. The infliximab biosimilar accounted for essentially all of Pfizer’s biosimilars turnover in other developed markets such as Japan, Canada, South Korea, Australia and New Zealand that were two-fifths higher at $10m. Emerging markets across central and eastern Europe, the Middle East, Africa, Turkey, Asia and Latin America contributed $7m, a drop of more than two-fifths as Inflectra/Remsima sales halved to $5m.

With global Biosimilars sales ahead by 13% to $632m in the first nine months of 2019, the business moved towards becoming a $1bn annual franchise for Pfizer. 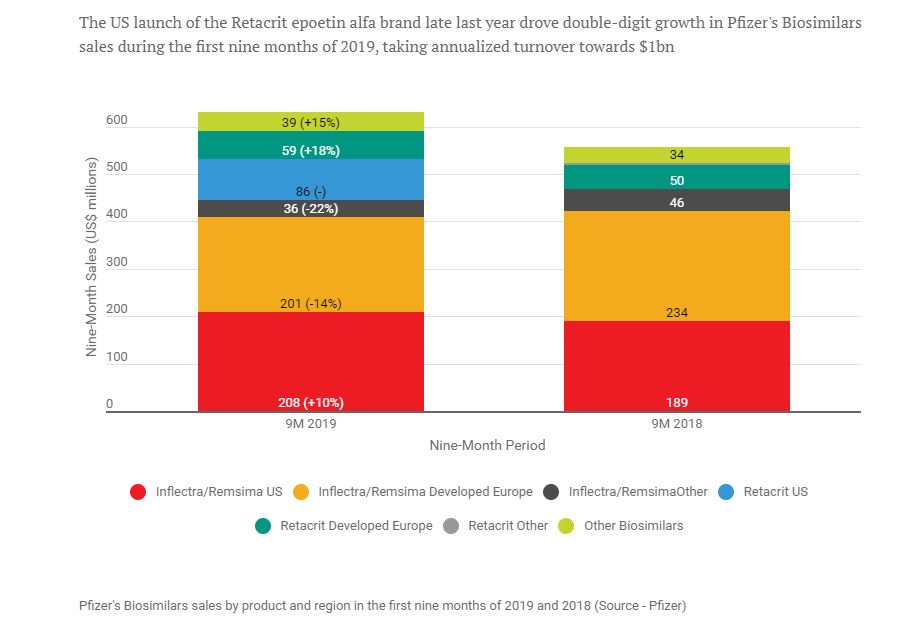 Commenting on Pfizer’s progress on biosimilars to date, as well as on the potential of the planned US launches, Angela Hwang – president of the company’s Biopharmaceuticals group that encompasses biosimilars and generic injectables, as well as patented brands – highlighted Retacrit’s progress in the US supportive-care cancer market.  ­

“To date, it has a 16% market share, which is the highest that we’ve seen of any biosimilar here in the US. And that’s given us the opportunity to learn about what it will take to launch oncology biosimilars, as well as what we can expect in this particular space,” she commented. “So I think with the three biosimilars coming one after the other in December, January and February, we look forward to driving the growth of this portfolio of biosimilars in an area of high unmet need for patients.”

Pfizer’s CEO Albert Bourla cautioned investors against extrapolating commercial experiences with biosimilars in the inflammation and immunology therapeutic arena across into the cancer setting. Whereas switching was vital for addressing autoimmune patients who typically received therapies for extended periods, the prevalence of naïve patients was far higher for oncology indications in which treatment regimens were often far shorter.

Bourla also contrasted the impressive biosimilar penetration rates achieved in closed US systems that integrated health insurance and medical care, such as Kaiser, with more commercially open models in which intermediaries were motivated by rebates and other financial kickbacks.

“I think in the US, unlike other countries, there is a problem with the system. The fundamental issue is that there is this rebate trap,” he asserted. While both payers and prescribers understood the central premise of biosimilars offering comparable quality, safety and efficacy at lower costs, Bourla believed they were “trapped” by concerns over losing the benefits and rebates that originators made dependent on retaining use of the reference biologic.

“Frankly, unless we resolve this big issue, we will never be able to see tremendous progress on biosimilars,” Bourla maintained. However, he noted signs that the issue was attracting attention among both members of Congress and payers. This “positive momentum,” he hoped, would bring about “transformational change in the penetration of biosimilars” that would create for the US healthcare system “significant savings.”