At the Tail End of the Pink Ribbon Snowstorm

Each October, a flurry of pink ribbons and other paraphernalia rises to increase awareness for breast cancer, which is the most common type of cancer for women worldwide and second most common overall.[1] As Breast Cancer Awareness month comes to a close, we’ll took a closer look at the ongoing clinical trials to review the industry’s commitment to this prevalent disease.

As of October 2015, 705 industry sponsored Phase I-III breast cancer studies were still actively recruiting or completed enrollment while continuing to treat and/or follow-up patients. (data not shown) Somewhat akin to snowflakes, not all breast cancers are the same. One key component that makes a patient’s cancer unique is the molecular subtype, such as human epidermal receptor 2 (HER2) or triple receptor negative (normal or negative HER2 expression and no expression of receptors for estrogen and progesterone), which can affect treatment response. Interest in these specific patient populations is certainly reflected in current clinical research since ~65% of ongoing trials explicitly target the subtypes of HER2 positive (HER2+) and negative (HER2-), triple receptor negative, luminal (A or B), basal-like, apocrine, and claudin-low.[2]

Among the 461 ongoing studies, the most prominent subtypes are both HER2 classifications. HER2- takes the lead by far, primarily due to the large volume of Phase II studies. In general, most HER2- research is weighted toward early stage clinical development since over 75% are Phase I through II. This appears to be why HER2- outnumbers HER2+ studies since trial counts are nearly equal for Phase II/III and III between the two populations. Triple receptor negative is the third most frequent subtype. Similar to HER2- trials, most triple receptor negative research is found in Phase I through II studies. As for the remaining subtypes, ongoing research is limited and only a total of 27 studies include patients with luminal A or B, basal-like, apocrine, or claudin-low breast cancer. (Figure 1) 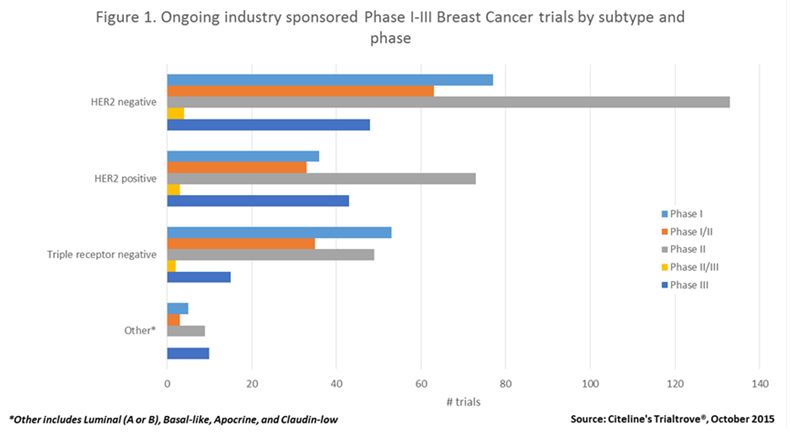 Unsurprisingly, the top 10 most active industry sponsors and their subsidiaries clearly focus on HER2 status and all have the highest trial counts in either HER2+ an/or -. Roche and Novartis are the most prolific by far and contribute to 39% of studies targeting specific breast cancer subtypes (108 studies for Roche and 73 for Novartis). In contrast, the remaining sponsors have anywhere between 11-29 ongoing trials. (Figure 2) 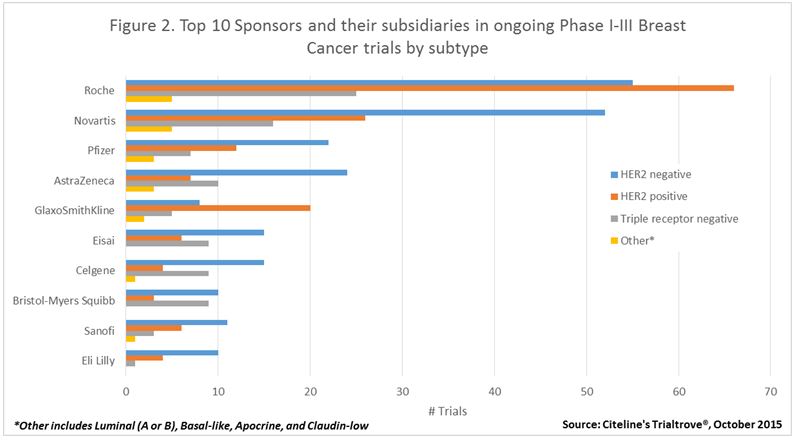 As for location, research is concentrated in North America (308 studies), Europe (227), and Asia (117). The remaining regions, such as South America and Australia, are only included in 20-50 trials each. (data not shown) The vast majority of North American trials take place in the United States (298/308 studies), which is the leading country for the top 10 trial countries. The 7 major markets (7MM) in general are well represented in the top 10 since the 5EU countries of Spain, France, UK, Italy, and Germany also make an appearance. The only missing 7MM country is Japan and it’s interesting to see that South Korea is the sole Asian country in the top 10 instead. As far as subtypes go, HER2- consistently outnumbers all other subtypes in trial counts for all top 10 countries in ongoing trials. HER2+ is second place for all countries except the US. In the US, triple receptor negative is second, but is closely followed by HER2+. (Figure 3) 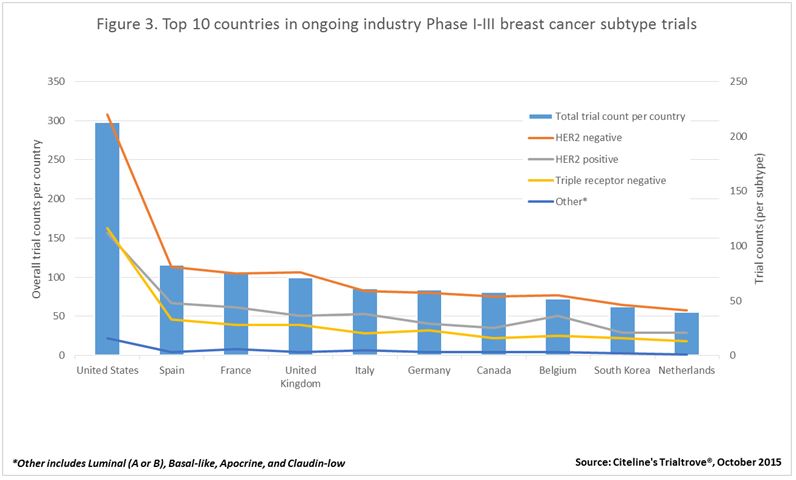 Although the month of October is quickly ending and the pink paraphernalia will dissipate, it appears that the commitment toward more targeted approaches, as well as breast cancer research as a whole, will remain.

[2] These studies include a mixture of histological subtypes and overlapping populations. 233 studies include multiple subtypes, which refers to trials that enroll different distinct patient populations (i.e. studies enrolling HER2+ patients as well as HER2- patients) but not patients with mixed subtypes (i.e. patients who HER+ and estrogen receptor neg)