Roche CEO Severin Schwan says analysts at ASCO missed a key APHINITY message on Herceptin follow-on Perjeta, and that the Swiss group will swiftly progress its CEA-CD3 bispecific to pivotal studies based on data presented there. 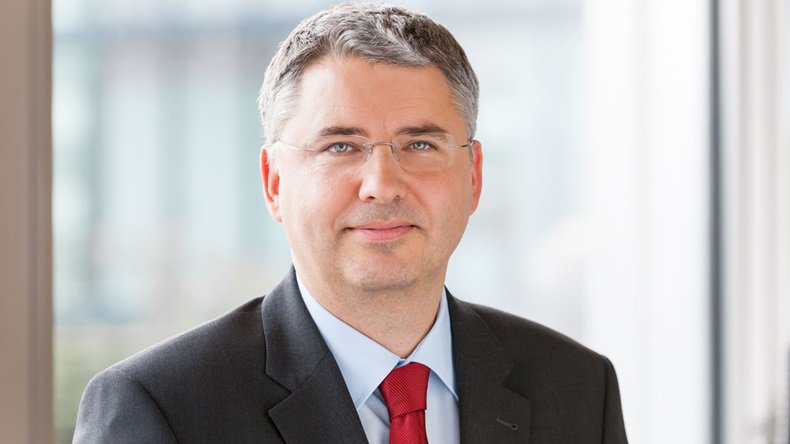 Roche's Austrian CEO Severin Schwan has a reputation for being mild-mannered, diplomatic and very precise – so when he says he's "disappointed" by ASCO's reception of a key product presentation – namely the Phase III APHINITY trial examining use of Perjeta (pertuzumab),Herceptin (trastuzumab) and chemotherapy together in the adjuvant treatment of breast cancer – there is a loud message underneath.

"I am disappointed," he told Scrip when discussing the group's APHINITY presentation at the just-ended ASCO event in Chicago, during which the Swiss group also made other data presentations.

"We are not talking about the prolongation of life, for a certain number of months, we are talking about cure. This is extremely important to keep in mind." - Roche CEO

Analysts before the APHINITY June 5 update – and which followed top-line data released in March – had been hoping for more than a one-percentage-point difference in invasive disease-free survival rates when it came to how much difference Perjeta could make when added to Herceptin and chemo in HER2-positive early breast cancer. Analysts reactions focused on Roche's data presented at ASCO showing that at three years, 94.1% of people treated with the Perjeta-based regimen did not have their breast cancer return compared to 93.2% treated with Herceptin and chemotherapy.

The safety profile of the Perjeta-based regimen was consistent with that seen in previous studies, with a low incidence of cardiac events and no new safety signals.

"This was three-year data. Part of the trial's design is for follow-up data. So, we've followed the patients after four years, five years, and so on. And I regret the fact that everybody is focused on the three-year data whilst from a patient point of view what really counts is the four-year data, which is the latest data," Schwan said in an exclusive interview.

" Perjeta will play a very important role in the adjuvant setting. We don't give projected peak sales for Perjeta. What we have guided the market so far is that we believe we can off-set the impact of biosimilars." – Roche CEO Severin Schwan

"What we see in APHINITY is that, for the total population we see an improvement that is twice as big, which is 2% and that's the relevant number. And when we have five-year data, that will be the relevant number. It just happens to be that everybody focused on the original numbers [the 3 years' data]."

"The key point is that the trajectory curves are further separating, for further follow-up. Meaning the benefit that you see initially doubles after only one year of additional follow-up. I believe this point has been completely overlooked at ASCO, although this is really the important number," Schwan said.

"We're talking here about a curative setting where the patients have not yet suffered from metastases. In this setting, if you can prevent a relapse then you're talking about cure. So, a small difference in this setting has a huge impact for the respective patients.

We are not talking about the prolongation of life, for a certain number of months, we are talking about cure. This is extremely important to keep in mind. So you need to look at what difference Perjeta makes here. Herceptin is already a fantastic medicine that reduces the risk of relapses so that means roughly 90% of patients don't get a relapse anymore [when given Herceptin and chemo] so that leaves us with ten out of 100 patients who still suffer from a relapse. Now, if you have a 2% improvement, then that [effectively] means two out of ten patients who get cured. So this is 20% of the patients that we are talking about. So while 1% or 2% of the total population sounds like a small relative difference, but what you need to look at is the difference compared with the current standard of care."

"Node-positive patients represent about 55%, and hormone receptor-negative patients represent about 15% in the trial. If you take those together we're looking at over 65% [of the APHINITY evaluation] are high-risk patients. For those high-risk patients, the effect was even bigger. For low-risk patients at three years we didn't see an effect, actually – but the hope is that the longer follow-up will see an effect in the longer term for the lower risk people but for the time being we don't see that." He stressed that APHINITY is on-going and will read-out over ten years.

The CEO would not be drawn on what the APHINITY data might imply for Perjeta's eventual indications. "I cannot make any projections or comments on what the label will look like. That's up to the authorities. We will be able to file on this basis and I believe the product will be approved.

He said Perjeta would still be a blockbuster but he would not give detailed forecasts, or say whether the therapy could still be as big as big a product for Roche as Herceptin. "I continue to believe that Perjeta will play a very important role in the adjuvant setting. We don't give projected peak sales for Perjeta. What we have guided the market so far is that we believe we can off-set the impact of biosimilars and continue to grow the overall HER2 franchise despite the biosimilars. The adjuvant setting should be a substantial segment given the data we have now," he said.

"This trial placed Alecensa head-to-head against crizotinib. And it shows an overwhelming difference in terms of efficacy improvement versus the standard of care, and on top of that it also has a more favorable safety and tolerability profile compared with crizotinib," Schwan summarized.

"The risk of progression-free survival was reduced by over 50%. This is massive. We have a median PFS now of around 26 months which compares with ten months with crizotinib, this is more than a year of difference. And Alecensa also very effectively protects against CNS metastases. We have seen unprecedented CNS complete response rates. There, 45% of patients in the Alecensa arm achieved a complete response with the CNS, which is much, much more than the crizotinib arm which had only 9% of patients. So it helps with metastases in the brain which is a particular issue with ALK-positive patients."

So what happens now with Alecensa? "We already have been granted breakthrough therapy designation by the US in first-line setting; it is already on the market in second-line setting. The ALEX Study is the second positive Phase III study for Alecensa, so we will work with regulatory authorities to bring the therapy to the market as soon as possible. I am very confident that the FDA will give a high priority to this medicine given that we already have breakthrough therapy designation and in light of this new data that we presented at ASCO."

Moving to earlier-stage assets, Schwan said that he's particularly excited about the preliminary data on the CEA-CD3 bispecific in treatment-refractory colorectal cancer patients which was presented at ASCO. The compound is a novel T-cell bispecific antibody which is being investigated for the treatment of carcinoembryonic antigen (CEA)-expressing solid tumors.

"We have a number of bispecifics. The one highlighted at ASCO uses a very smart mechanism to bring the killer cells to the place where they should act and what is so exciting is that we see in early clinical trials we see very good response rates and we presented data for colon cancer for patients who didn't respond to anything anymore," Schwan explained.

"Specifically, this was a combination of this bispecific with our PD-L1 Tecentriq (atezolizumab). We see a dose effect and we see response rates for a number of patients and that is of course exciting because there is no medicine for these kinds of patients. And it is a mechanism which could of course work for earlier lines and improve the standard of care in colon cancer but importantly it could also work for other cancer types. So, it's one of those mechanisms which has a platform. Based on this data we will now bring this into pivotal studies as soon as possible, and we'll go as fast as we can."

Asked to rate Roche's ASCO experience this year in Chicago on a scale from 1 to 10, Schwan replied: "It depends how I look at it.

"But if I look at how the market reacted – in particular on how it reacted on the APHINITY data, I am disappointed and I would give zero out of ten points," Schwan said with a chuckle.