When considering cancer in men, prostate cancer could be described as ‘all too frequent’. Indeed, the annual month of ‘Movember’ is here once again and serves as a stark reminder that men worldwide are still dying too young from this disease. Worldwide prostate cancer is currently the second most common cancer in males and the fourth most common cancer overall, with over 1.1 million new cases diagnosed in 2012. Prostate cancer diagnoses have been increasing in recent years, partly attributable to more widespread use of screening procedures such as PSA testing [1][2][3].

Top drugs for prostate cancer
A look at the most common biological targets for prostate cancer drugs in active development gives a good picture of the disease landscape (Figure 2), and we’ll highlight a few candidates from various targets here [4]. One of the most prominent prostate cancer therapeutics in recent years is Medivation’s androgen receptor antagonist enzalutamide, which is licensed to Astellas. First launched in the US in 2012, enzalutamide has since been launched in the EU, Canada and Japan, with registrations pending in Australia, Brazil, South Africa and Switzerland.

Another late stage drug is Teikoku Pharma’s alcohol-free formulation of docetaxel. The drug is currently awaiting approval in the US for prostate cancer, as well as head and neck, lung and breast cancers.

Currently in Phase III trials is FP-001, a depot formulation of the gonadotropin releasing hormone (GnRH) agonist leuprorelin, which is part of a joint venture agreement between ScinoPharm and US-based Forsee Pharmaceuticals. Worldwide filings are planned, with US launch expected in 2016/17.

Lastly, Array Biopharma has an early stage candidate in their orally-active EGFR/ErbB2 inhibitor, varlitinib. Currently licensed to Aslan Pharmaceuticals for development worldwide, varlitinib is in Phase I trials for prostate cancer and other solid tumours. 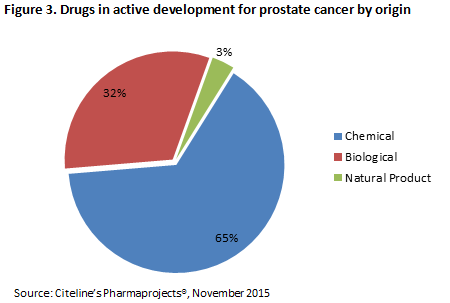 Overall, the landscape for prostate cancer looks encouraging. Established launched drugs look set to be backed up by new, up and coming therapies. The preclinical and early clinical phases also reflect the interest in this area from drug development companies. With people flocking to the ‘Movember’ banner every year, this mix of awareness, public support and new drug development can only be a positive move towards conquering this disease.

[4] Details for drugs discussed in this section retrieved from Pharmaprojects® (November 2015).