"Basket trial" design allowed Puma to identify certain cohorts for further study, but also missed in areas where neratinib was expected to work.

Puma Biotechnology Inc.'s innovative "basket trial" of its neratinib in a wide variety of cancers highlights the drug's potential beyond breast cancer, but also shows the challenges of studying patients according to mutations, rather than tumor type.

The company presented results for neratinib, an irreversible pan-HER targeting tyrosine kinase inhibitor, as a monotherapy in the Phase II SUMMIT study of multiple solid tumor types with HER2- and HER3-activating mutations on April 2 at the American Association for Cancer Research meeting in Washington D.C.

When people refer to a malignancy as HER2-positive, they generally mean overexpression, or amplification of the HER2 protein. But there has also been interest in targeting HER2 activating mutations, which are often mutually exclusive to HER2 amplification. HER2 mutations are seen in multiple tumor types at low rates, ranging from 1% to 3%. Most commonly they are present in bladder cancer, but they are also present in breast, colon and other tumor types.

Lead investigator David Hyman noted in an AACR statement about the SUMMIT data that there have been reports of HER2-mutant cancers responding to off-label use with HER2-targeted therapeutics.

The key pitfall of studying by mutation rather than tumor type, per the basket trial design, is that the mutations may behave differently from one tumor to the next, and different mutation subtypes may be dominant, depending on the cancer type.

The data also suggest that there are subsets of HER2 mutations that play a role in response and that neratinib may need to be combined with other agents to have activity, reported Hyman, who is director of developmental therapeutics at Memorial Sloan Kettering Cancer Center.

SUMMIT is a "basket trial," a study that uses a master protocol to test drugs in patients according to molecular signatures, as determined by genome sequencing studies. Basket trials are often carried out by large government and professional organizations in partnership with academic institutions, for example the National Cancer Institute's MATCH trial and the American Society of Clinical Oncology's TAPUR study. (Also see "Genomics-Driven Trials Built To Be Fast And Flexible" - Pink Sheet, 21 Sep, 2015.) But some big pharmas are also investing in the model on their own, like Novartis AG's SIGNATURE study.

Discussing SUMMIT results after their presentation by Hyman at the AACR meeting, Sarah Cannon Chief Medical Officer Howard Burris praised the study design, noting that it was a great way to assess targeted therapies in subpopulations.

"The design here is one that should be emulated and mimicked by others studying it," Burris said.

Hyman said during an AACR press briefing that with the move of whole genome sequencing into the community setting, "it is increasingly feasible to do this kind of work."

Breast cancer is the lead indication for Puma's neratinib, a drug that successfully graduated from the innovative I-SPY adaptive trial program, an "umbrella trial" that is testing drugs from a range of different manufacturers in early stage breast cancer. (Also see "I-SPY Graduates: Where Are They Now?" - Pink Sheet, 10 Jul, 2016.) I-SPY is sponsored by the non-profit QuantumLeap Healthcare Collaborative and the Foundation for the National Institutes of Health Biomarkers Consortium.

Puma announced in September 2016 that FDA accepted an NDA for neratinib for extended adjuvant treatment of patients with early stage HER2-overexpressed/amplified breast cancer who have received prior treatment with Roche'sHerceptin (trastuzumab), following a delay to the filing. (Also see "Puma Plummets On Another Neratinib NDA Delay" - Scrip, 29 Mar, 2016.)

The application could see approval by July 21 or earlier. In the pivotal study supporting the filing, the drug demonstrated a disease-free survival risk reduction of 33%, though a three-year analysis of the study showed that efficacy dropped to 26%. Diarrhea has also been a troublesome side effect, though it can be managed prophylactically with loperamide.

Neratinib is also in Phase II for lung, gastric and cervical cancers.

Researchers discovered a wide variety of tumors with HER family mutations and HER mutation subtypes in the study. At the AACR meeting, they presented data for neratinib as a monotherapy in 141 patients.

But even though bladder cancer is known to have the highest number of HER2 mutations, neratinib did not show much activity in this tumor type. Researchers found that response varied depending on the subtype of HER2 mutation, of which S310 was most common. But neratinib might produce a response in a particular subtype in one cancer, but not affect another cancer with the same mutation subtype.

Neratinib showed the most activity in breast cancer followed by biliary tract and cervical cancer (see table below for efficacy results).

"We view these as potentially promising disease indications for this drug," Hyman said. In lung cancer, the drug as a single agent did not have much activity in terms of objective response rate, but it did appear have an impact on stable disease and median progression-free survival, which in this tumor type was 5.5 months.

On the safety front, researchers reported that the most common adverse event was, not surprisingly, diarrhea, despite use of loperamide. Overall, 73.8% in the study had diarrhea and 22% had a Grade 3 event. For 10%, diarrhea was an important medical event and/or resulted in hospitalization. The median number of severe episodes per patient, however, was only one and the effect rarely caused patients to drop out of the trial (2.8%).

Although one in five had a high grade case, most did not find treatment intolerable, Hyman reported. 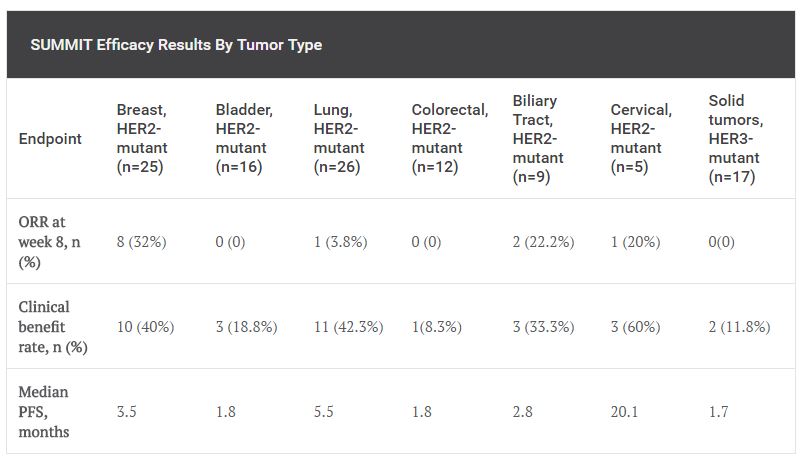 Combinations May Be Needed

Follow-up work in SUMMIT is ongoing in areas where a signal was demonstrated and some tumor types have yet to report.

Asked to explain why neratinib did not show activity in some cancers that are known to have activating HER2 mutations, like bladder and colorectal cancer, Hymayn responded that it could be that HER2 is not a driver in these tumor types or alternatively that it is but that "we are not drugging it effectively."

Hyman believes that most likely it's a combination of these factors, but more so the way the mutations are targeted with drug therapy.

"Is neratinib monotherapy going to get us there? Probably not in most diseases. I think neratinib in combination with other drugs may," Hyman said.

Hyman suggested combining neratinib with chemotherapy or anti-hormone therapy and noted that HER2-targeted drugs are used in combination with chemo.

Roche followed up the release of Herceptin with the introduction of Kadcyla (ado-trastuzumab emtansine, T-DM1) and Perjeta (pertuzumab), which have different mechanisms of action in HER2-positive breast cancer. The company recently announced positive results for the combination of Herceptin and Perjeta in the APHINITY study of adjuvant breast cancer treatment. (Also see "Roche Relief As APHINITY Trial Boosts Outlook On Its Oncology Business" - Scrip, 2 Mar, 2017.)

A Phase Ib study done by the National Surgical Adjuvant Breast and Bowel Project (NSABP), a cooperative group, with funding from Puma tested neratinib in combination with Kadcyla, which is approved for second-line treatment of HER2-positive metastatic breast cancer after treatment with Herceptin and a taxane.

Results were presented by Jame Abraham, director of the breast oncology program at the Cleveland Clinic's Taussig Cancer Institute, at the AACR meeting April 2.

Patients now get Perjeta with Herceptin in the neoadjuvant setting, but Kadcyla does not appear to be as effective after this combination as if it were given after Herceptin with a taxane, the study abstract notes.

The NSABP study tested a range of neratinib doses in combination with Kadcyla in patients who had received neoadjuvant treatment with Herceptin and a taxane.

Researchers reported activity across all doses, with an ORR of 56% (nine of 16 patients).

Participants were given loperamide prophylactically to prevent diarrhea, which was the most common adverse event – 19% had Grade 3 cases and 52% had Grade 2.

Researchers said that the efficacy and safety profile is promising and are now planning to take the 160 mg/day dose into Phase II.