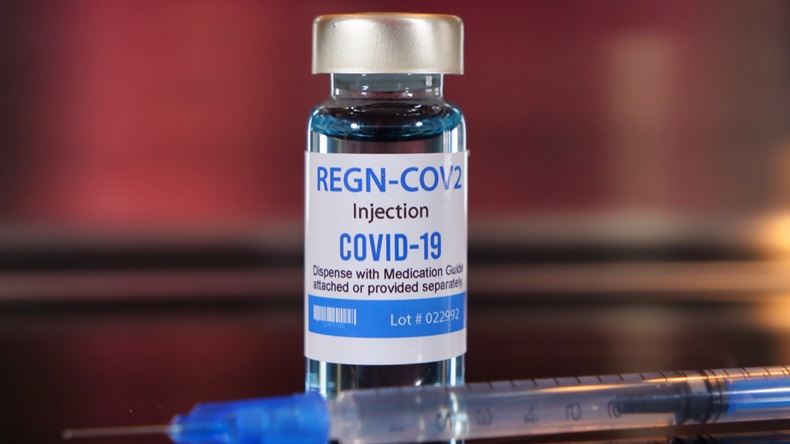 Any chance of the agency taking enforcement action seems remote, but the incident underscores the legal and ethical minefields that the pandemic’s intersection with politics has created for sponsors developing COVID-19 treatments and vaccines.

Yacopoulos said there was no “special relationship” and said the company also “reached out” to the Biden team “to offer” the cocktail, known as REGN-COV2, to them as well.

Biden and many of his staffers have been closely monitoring themselves for COVID-19 due to their interaction with Trump and his team at a presidential debate last Tuesday, just days before it was revealed Trump and many of his advisers had contracted the virus.

“I think this compassionate use mechanism is something that is in place and put in place for exactly these extenuating circumstances,” Yancopoulos said.

But Yancopoulos’ response to one tough question may have put the company in another sticky situation – a potential preapproval promotion violation, experts said.

A key question for the FDA may be whether it perceives Regeneron as promoting the unapproved use or simply educating about the availability of expanded access. Connecting the experimental drug to a particular illness could put the company on the wrong side of the line, experts said.

Regeneron spokesperson Alexandra Bowie declined to provide any detail on who on the Biden team may have been offered the experimental medicine and for what purpose, saying the company had been in touch with the campaign “to make them aware of the compassionate use mechanism, should they need to apply,” adding that the medicine was only available through clinical trials or compassionate use “in certain exceptional cases.”

Bowie said the communication to the campaign wasn’t a guarantee of access, but simply letting them know the process is there if needed. Yancopoulos’ statement seemed like more of a direct offer of the biologic.

“It looks like the company may be trying a media campaign leveraging attention on the presidential campaign to promote an unapproved use. They are skating on thin ice,” Christopher Robertson an expert on off-label promotion at Boston University.

“Even if FDA does subsequently authorize use of the product through expanded access or emergency use authorization, the promotion could still be prosecuted. On the other hand, companies are encouraged to have explicit policies stating whether they offer expanded access to their products. But when it moves over to active promotion, that is reserved for FDA-approved products,” Robertson said.

“Reaching out to someone and saying, ‘Hey, we have a product.’ It’s just beyond the pale,” said Alison Bateman-House, a bioethicist at New York University.

“It’d be one thing to reach out and say, ‘We have a product you might be interested in and there’s a clinical trial at Johns Hopkins or something, and if you’re interested, here’s the contact information,’ because as a society we generally think it’s acceptable to tell people about their clinical trial options, right? It helps all of us to have the trials. But it’s another thing entirely to reach out and say, ‘Hey, you know, you might be interested in our unapproved product that you can get outside of a trial,” Bateman-House said.

This she said is unethical and starts to look more like promotion of an unapproved product and “even more so” she said when the company announced to the public they did this.

If a company if aware of a case where compassionate use of its product might be appropriate, the company should use a third-party, like a disease advocacy organization, and ask them to make the patient aware of the potential option, Bateman-House said.

There are also acceptable ways for companies to make sure the general public know that compassionate use is an option, she said, like listing themselves in an expanded access navigator. Janssen Pharmaceuticals Inc., a company she works with, puts the names of the investigational compounds they might consider granting access too on their website – but they deliberately avoid listing indications because that could get them into the territory of promotion of an unapproved product, Bateman-House said.

“It’s asking for trouble and it’s totally unsafe,” for companies to proactively offer compassionate use to particular people, Holly Fernandez Lynch, a bioethicist and lawyer at University of Pennsylvania, said

The same ethical problems apply, she said, if a company saw a story about a sick child on the news and reached out an offer the drug.

For every high-profile case a company becomes aware of “there are going to be people who don’t have the same kind of media savvy or support around them to launch these massive Facebook campaigns and social media campaigns to get attention to their case. So for every person that you happen to see on the news, there would be other people who would not be reached,” Lynch said.

Instead, companies should publicly lay out their criteria for expanded access. “Making a wide group of providers aware of this option will be a much fairer and equitable way to go,” she said.

There is some history of FDA taking action against companies promotion of expanded access programs. In 2011, ChemGenex Pharmaceuticals Limited received a notice of violation letter saying that the existence of such a program does not give the sponsor the right to promote the investigational drug. (Also see "ChemGenex's Phantom Expanded Access Program For Omapro Cited By FDA" - Pink Sheet, 10 May, 2011.)

Patti Zettler, a former FDA attorney and a professor at Ohio State University, argued there’s a legitimate reason for a company to discuss a president’s treatment with its drug to the public, but there’s less justification for publicly broadcasting a hypothetical treatment option with an experimental drug as Yancopoulos did with Biden’s campaign.

“I think what interventions the president, or even presidential candidates, are receiving may be information that should be public, as it goes toward the health of the candidates. I think a company disclosing that it’s reaching out to a presidential candidate to offer its experimental intervention may be different. If Biden’s not receiving the experimental intervention, what beneficial purpose does disclosing that information serve, from the public’s perspective?” Zettler added.