Two new diseases were recently added to Trialtrove, retinitis pigmentosa and spinal muscular atrophy.  Both of these diseases are considered rare, which are defined by the Orphan Drug Act as disorders affecting fewer than 200,000 individuals in the United States1.  For rare diseases, the small numbers of patients, the geographic dispersion of patients, and the small number of adequately trained researchers have all been barriers to effective clinical development for new drugs.2  How drug and trial intelligence might help to plan for future studies in a rare disease, such as retinitis pigmentosa, is discussed here.

Based on prevalence data, around 60,000 people in the United States have retinitis pigmentosa3.  Retinitis pigmentosa is an inherited disease in which the light-sensitive retina of the eye slowly and progressively degenerates, and eventually blindness results.  There are no clinically approved drugs for the disease, and current treatment involves prosthetic devices, electrical stimulation therapy, vitamin A, or antioxidant nutritional therapy.   Of the 50 retinitis pigmentosa trials that fall within the scope of the Trialtrove inclusion criteria for this disease, (trial must be evaluating a drug and not a device, initiated after 2005 or completed after 2012), 47% are not found at Clinicaltrials.gov.    Trialtrove’s more comprehensive data shows how clinical development for new treatments may be on the rise (Figure 1), as suggested by the higher trial numbers for early phase trials (I – II), compared with later phase trials (II/III- III).   The majority of drugs currently in clinical development are NCEs (66%), with the remainder being recombinant proteins, gene or cellular therapies.  Two drugs have progressed to phase III in this disease, one is a chemical entity and the other is a cellular therapy.  Pharmaprojects was queried for drugs currently in preclinical development, and of the 17 drugs at this stage, 12 (71%) involve gene or cellular therapy, indicating that these novel therapeutic approaches may predominate in the future. 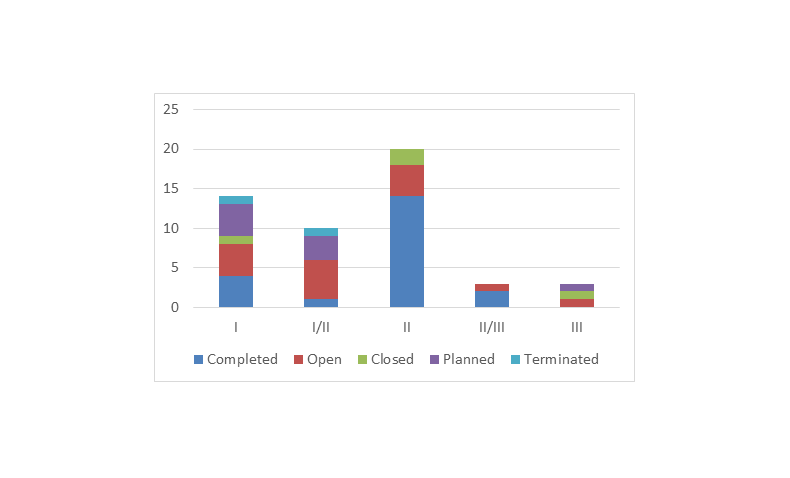 When designing a clinical trial for an orphan drug, companies must think how the low prevalence of the disease affects their patient recruitment strategies2.  While the 50 retinitis pigmentosa trials have been conducted in 20 different countries, the majority are being run in the US, followed by Japan, India and Germany, as shown in Figure 2.   Between 1 and 4 trials have been conducted in the remaining 16 countries, which provides considerable intelligence for companies with respect to ex-US sites and investigators.   Building on the knowledge gained from previous trial data, such as location of patients and experienced sites, pharmaceutical companies are better prepared for planning their new trials.  The small number of phase II/III and III trials, limited to the US, Japan, Israel, and Spain, focuses in on the potential clinical trial expertise with larger trials. 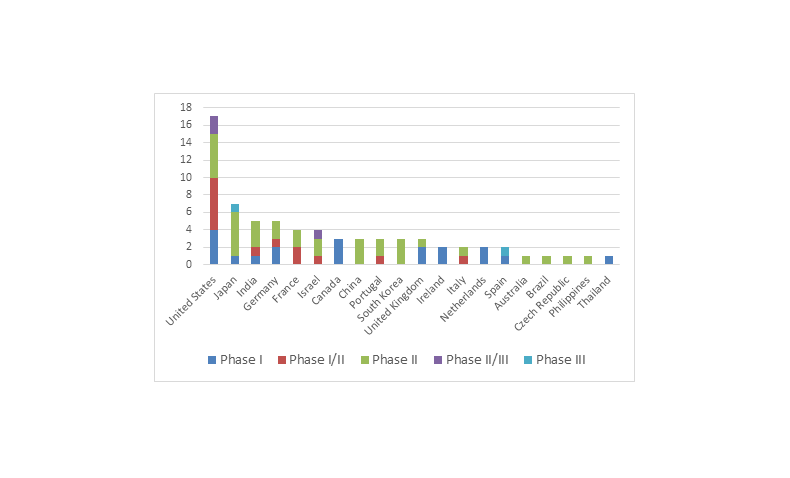 Comprehensive intelligence on where trials have been conducted, the types of drugs and the trial design, will hopefully help to break down the barriers that presently hinder clinical development for retinitis pigmentosa therapies.  It would also be exciting to see if increased transparency of trial intelligence in rare diseases as a whole, may advance therapies to market sooner than would have been otherwise.