‘Tis the Season – RSV Season, that is…

Respiratory Syncytial Virus (RSV) hit home for me last winter when a relative’s 3 month old twins were hospitalized with this virus. Their pediatric ICU was dealing with an overload of RSV infected babies with nothing to offer except supportive care. The twins were lucky, and were discharged after a week in the hospital. As September rolls on, another RSV season looms with no approved vaccine or treatment, which prompts a look at where we stand in development of a vaccine.

A review of the current state of RSV vaccine development is also timely since Phase II data for Novavax’s programs in maternal immunization and elderly/high-risk adults are due to become available next quarter. Currently, Novavax leads the race toward an approved vaccine with their maternal immunization program, which immunizes pregnant women in order to pass RSV protection on to their babies. Their RSV nanoparticle vaccine is slated to enter Phase III in this indication in late 2015 or early 2016. Novavax has two planned Phase III trials for this vaccine: one in maternal immunization and one in elderly and high-risk adults [Figure 1].

GlaxoSmithKline is hot on Novavax’s heels with their vaccine in Phase II, also targeting maternal immunization. They have two additional vaccines, both in Phase I, one of which is targeting infants and toddlers while the other’s target population has not been disclosed [Figures 1, 2].

AstraZeneca (MedImmune) has the highest number of vaccines in development due to ongoing collaborations with NIAID and NIH. However, all of their vaccines are still in Phase I, with only MEDI-7510 slated to enter Phase II in October 2015 for elderly adults [Figures 1, 2].

Bavarian Nordic is also planning a Phase II trial for their MVA-based RSV vaccine to start sometime in 2016, however, the target population for that trial has not yet been disclosed [Figure 1]. 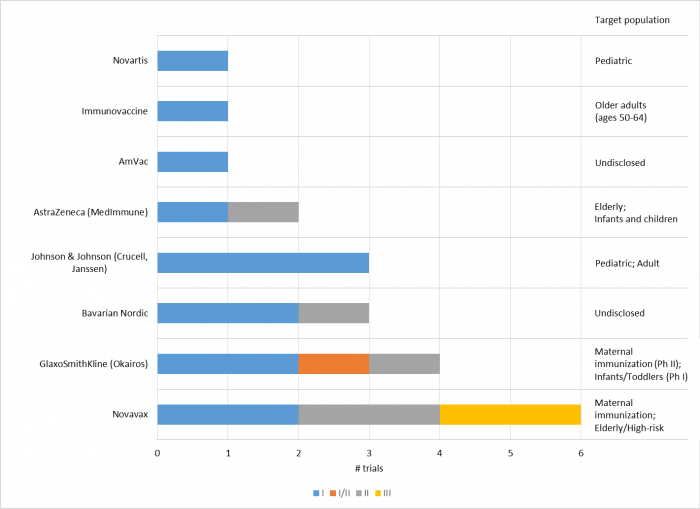 As the influenza and RSV seasons rapidly approach, RSV vaccines are poised to make great strides towards market. With Novavax leading the pack, there are a number of vaccines entering mid- to late-development stages. Soon, high risk infants may not need to spend a week at the hospital with this deadly virus but could be vaccinated before birth.