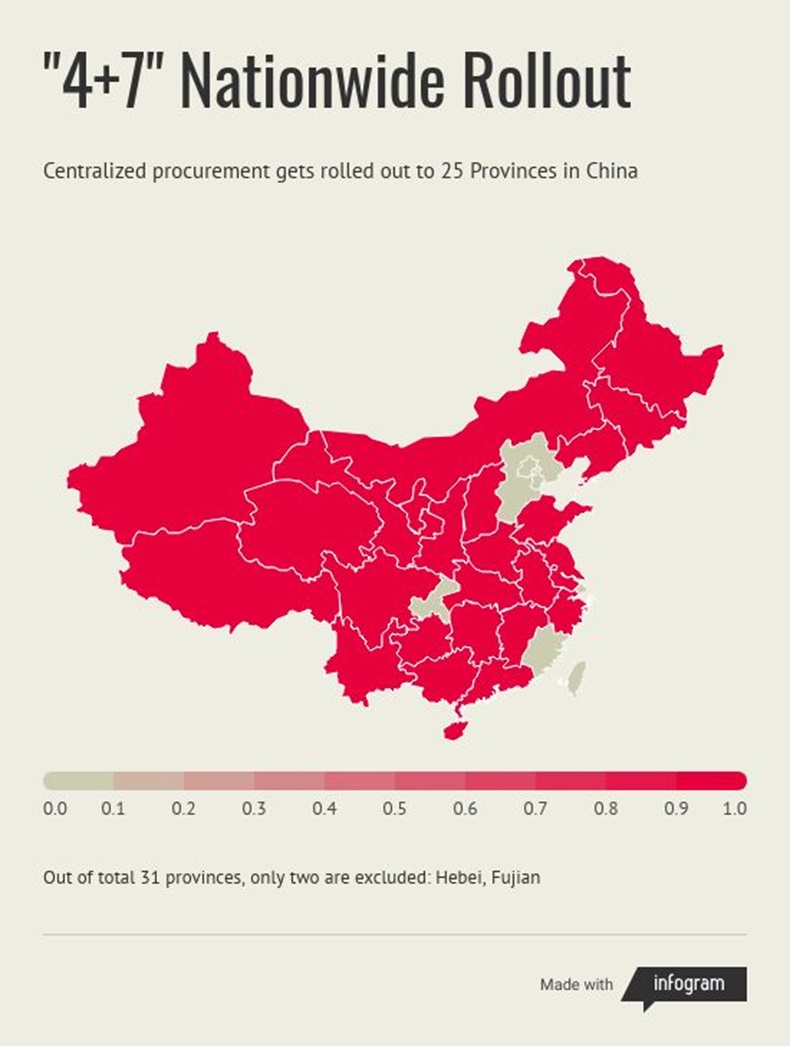 On the day of submission of bids under China's expanded national drug procurement program, the eagerness to win was on full display.

24 September was the day bids had to be made under the so-called block procurement system for 25 drug products in China. The day started early and ended nasty.

Even before the official opening of the bidding, which is being overseen by the Shanghai Medical Procurement Office, representatives from many drug firms were already waiting to enter with envelopes in hand.

The latest procurement round marks an expansion of the previous “4+7” scheme and now covers 25 provinces with potentially billions of dollars of sales at stake. Compared to 4+7, which covered 11 major urban markets, the new block procurement round centers on tier 2 and 3 cities.

By volume, the 4+7 round accounted for 30-40% of China's urban pharma markets, while the block procurement is expected to have a wider impact on the overall pharma market in China.

It seemed to be do or die for some participants.

Even before the full day for bid submission ended and all the bids were collected, some observers had started predicting the results were going to be "ugly". The actual results, announced on 25 September, seemed to validate their worst fears.

Many Prices Lower Than 4+7
The results, announced by the Shanghai Procurement Office on its website, showed that some winning bids had involved price cuts going even deeper than those in the previous 4+7 round.

Some products saw cuts of up to 78% and seven out of the total of 25 products opened to bids this time saw prices slashed by over 60%.

Tantalized by the prospect of sheer volume and the allowance in this round of more than one winner, drug manufacturers were fighting down to the last cent to win the process, noted "Dr. 2", an industry observer, in a 25 September commentary.

Sandoz was among three makers to win for cholesterol drug atorvastatin 10mg with the company's sub-packaging partner Lek Pharma, which won with an offer of CNY0.23（$0.03) per tablet, 71% below the 4+7 winning price of CNY0.78, from Jingxin Pharma.

Sanofi won the bid for antiplatelet agent Plavix (clopidogrel) 75mg tablets, the price of CNY2.54 per tablet being 21% below the 4+7 value of CNY3.18, won by Shenzhen Salubris Pharmaceuticals Co. Ltd. The Shenzhen generic maker lost this round even though it lowered its bid price by five cents.

Merck was among two companies to win the bid for Singulair (montelukast) for asthma, and the winning price matched the 4+7 winning bid by Shanghai Aibisheng Pharma.

Lilly won for lung cancer drug Alimta (pemetrexed) with a bid of CNY809, CNY1 lower than in the 4+7 round winning bid, while the domestic winner for the drug, Sichuan Huiyu Pharma, won by cutting its own 4+7 winning bid by 1%.

Some Previous Winners Lose Out
Several drug companies who had won the previous round lost out this time, indicating that a much fiercer price war took place.

Jialin Pharma, for one, had won the earlier 4+7 round with a price of CNY0.46 for atorvastatin tablets, but this time the Beijing-based firm lost to Qilu Pharmaceutical Co. Ltd. and Xinan Pharma, whose prices were CNY0.12 and CNY0.13 respectively, a 78% cut from Jialin’s previous winning bid.

Like Jialin, previous winner Jingxin Pharma had hoped to score again for rosuvastatin by slashing its previous winning bid by 46%, but even so still lost out this round.

The eventual winning bidders, Hisun BioRay Biopharmaceutical Co. Ltd., Lek Pharma and CP Tianqing, had bids that were a huge 74%, 71% and 62% below than Jingxin’s earlier winning levels in the 4+7 program.

Shenzhen Salubris, which had a competitor to Sanofi’s clopidogrel, was also dealt a blow, losing to both Sanofi itself and domestic firm Lepu Pharma, a subsidiary of Lepu Medical Technology (Beijing) Co. Ltd., which had earlier acquired a domestic maker of clopidogrel, Henan Xinshuaike Pharma.

“It’s highly likely that Shenzhen Salubris didn’t expect Sanofi would cut prices this deep to win the bid," suggested Dr. 2. “After all, this round is no longer 11 cities' procurement scheme, it’s a nationwide procurement,” he added.

Indian Pharma Scores
This round, multinationals were seemingly determined to score a win, out of fear of losing more ground to domestic competitors, observers said.

The fact that some winning prices, such as for Sanofi’s Plavix and Lek’s Pharma’s atorvastatin, were even lower than those of domestic generics, indicated such companies' determination to retake some of the market lost during the last round of bidding.

Another notable winner was Indian firm Dr. Reddy's Laboratories Ltd., which beat its rivals for the olanzapine 10mg bid, a first for the Indian industry, which recently has been actively seeking to enter the Chinese generics market with a pricing advantage.

Dr. Reddy's winning bid of CNY6.4 was 34% below the previous winning price in 4+7, which was won by domestic company Jiangsu Hansoh Pharmaceutical Group Co. Ltd.