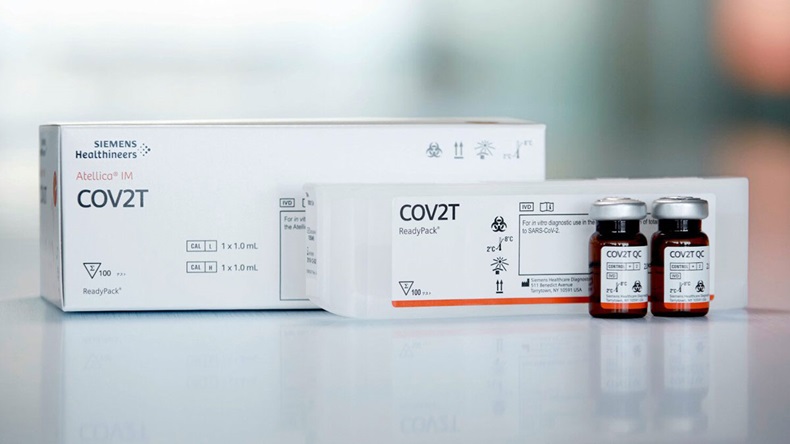 Siemens Healthineers AG announced on 1 June that the US Food and Drug Administration has granted emergency use authorization (EUA) for its laboratory test to detect the presence of SARS-CoV-2 antibodies in blood. The test was CE marked last week and the company also plans to apply for 510(k) clearance for the test in the US to ensure the test is still available once the EUA is revoked.

Deepak Nath, president of laboratory diagnostics at Siemens Healthineers, told Medtech Insight in a 28 May interview that the company’s primary motivation was to answer societal need with a high-quality antibody test; it wasn’t a case of needing a business plan. “There is still so much unknown about this virus, the disease it causes and how the disease progresses, but we believe that an antibody test will be an important tool in understanding how the disease progresses and making sure we keep populations safe,” he said.

The SARS-CoV-2 Total (COV2T) test can only be run on the company’s proprietary analyzers, including the Atellica IM immunoassay analyzers, which can run up to 440 tests per hour and can produce results in around 10 minutes, according to the company. There are around 3,500 Atellica systems installed worldwide. The test also is available on the company’s ADVIA Centaur XP and XPT analyzers, which can test up to 240 samples per hour with a result in around 18 minutes. A version of the test has also been released for use on the company’s legacy Dimension Vista and Dimension EXL systems. As a result, the COV2T test can be run on around 20,000 analyzers in 158 countries, with a capacity of 50 million tests per month currently. Nath said the company could expand laboratory testing further, depending on demand.

COV2T detects IgM and IgG anibodies, among others, and the company also plans to launch a version for detecting only IgG antibodies soon; IgG generally develops after IgM and gives a better indication of past infection, going back months or even years.

Nath would not comment on what impact the test would have on the company’s diagnostics business. “We don’t know enough about how this disease will progress to put forward any kind of forecast [of the antibody testing market] that has any element of fidelity or credibility to it,” he said.

Nath explained that the way antibody tests were going to be used in the near- and mid-term was still being worked out around the world and it was not yet clear what capacity for testing would be needed. “There is a large error bar around how many of these tests will be needed,” he said. “A lot goes into producing a test, with each element having its own supply chain, and we feel very confident in the [capacity] numbers that we’ve put forward.”

Nath believes the COV2T test is differentiated by the combination of quality, efficient testing of large populations, and the fact that it can be produced at scale. He added that there were two components to quality: first, a high level of accuracy; and second, the fact that the COV2T assay detects neutralizing antibodies to the spike protein on the surface of the SARS-CoV-2 virus. Some antibodies to the spike protein neutralize the virus by preventing it from entering the cell and some potential vaccines in development for SARS-CoV-2 include the spike protein within their focus. Nath said that as a result, Siemens Healthineers was in discussions with vaccine developers on possible partnerships, but he declined to give further details.

The COV2T antibody test allows for identification of patients who have developed an adaptive immune response, which indicates recent infection or prior exposure. The test can also detect IgA, although testing for this antibody this is not currently recommended as little is known about IgA response in the blood. Siemens’ test data demonstrated 100% sensitivity and 99.8% specificity overall for COV2T.

Tests to establish the sensitivity and specificity of Siemens’ assay were conducted on 1,851 samples, a smaller sample size than for sensitivity and specificity studies of Roche Diagnostics Corp.’s Elecsys Anti-SARS-CoV-2 antibody test, which was based on a total of almost 5,300 samples. (Also see "FDA Grants EUA For Roche’s Coronavirus Antibody Test" - Medtech Insight, 4 May, 2020.)

Roche also claims 100% sensitivity and 99.8% specificity for its antibody test, leading to the company winning major orders in the UK and Germany. The Swiss company also recently said that the test is in use at more than 20 commercial and hospital labs throughout the US, including those of LabCorp and other commercial labs, and these labs have a combined capacity of more than two million tests per week.