A rise in bureaucracy and increased liability for clinical trial sponsors have impacted the popularity of India as a location for pharmaceutical companies’ clinical studies. Trialtrove’s Deborah Jeanfavre examines the data, which show a continuing decrease in new industry-sponsored trials starting in India over the past five years. 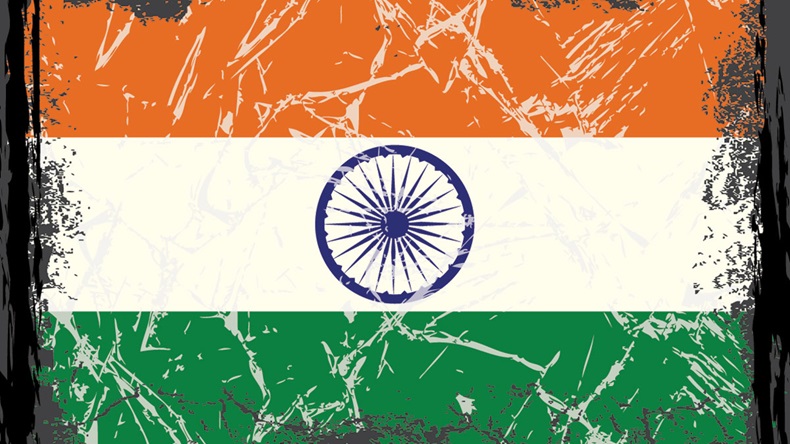 The rosy view of India as a location for relatively low-cost clinical trials with a readily available, treatment-naïve patient population became shaded over the past five years by an untenable time to approval. With the prolonged online review process, combined with increased liability for sponsors and other trial-related restrictions by the Indian government, it is not surprising that India became a less attractive clinical trial location to pharma. (Also see "NIH confirms cut-back in Indian trials but large sponsors hope for reform" - Scrip, 18 Jul, 2013.) Taking a look in Trialtrove, we examined industry-sponsored study starts in India in the aftermath of these regulations, drilling down to explore the effect across major therapeutic areas, sponsors and diseases.

Multiple factors have contributed to an increased approval time in India during the last 5 years. The country transitioned to a mandatory, online filing process in 2009 (IPP clin trials reg india.pdf), extending review completion to as long as 9 months by 2012. (Also see "China now leads India 2:1 in clinical trials " - Scrip, 3 Jul, 2012.) In 2013, the Indian government also shifted greater responsibility to sponsors for the liability in the running of trials and implemented restrictions regarding ongoing trial numbers for each investigator and the site size required for trials. Repercussions due to the overall changes were evident in 2013 when the NIH stopped as many as 40 ongoing trials in India. It was then speculated that pharma might follow suit. Trialtrove data for trials in all phases support this supposition, showing a marked decline, by 50%, in the number of industry-sponsored trial starts between 2012 and 2013 (Figure 1). 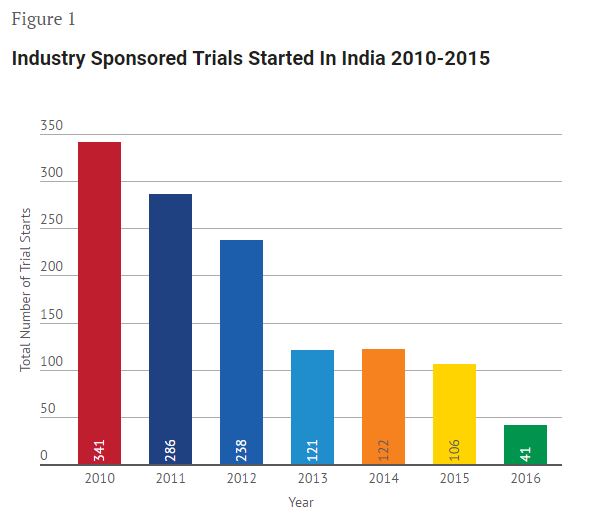 Trial numbers are limited to those for which a start date is provided in the public domain. The numbers for recent years may also be impacted by delayed reporting of trial activity.

With growing interest in Asia Pacific countries (APAC) as emerging markets and recognition as important locations for clinical trials, we looked into whether India’s policies might set it apart from other countries in the region. Data in Figure 2 indicates that most of the nine other major APAC countries maintained, or even increased, the number of trial starts in the same period. There was an increase between 2010 and 2013 across Japan, South Korea, China and Turkey. Although a few of these countries may have benefited from India’s lost trials, the data does not highlight a clear migration of trial activity to specific members of APAC.

Did The Changes Impact All Therapeutic Areas And Industry Sponsors?

To dig a bit deeper into this trend, the percentage of trial starts in India (per therapeutic area), was queried for this period (Figure 3). Clearly, the decreased trial initiations can be observed across all areas. The largest changes were observed in CNS and Infectious Diseases, followed by Metabolic/Endocrinology, Cardiovascular and Oncology, all of which exhibit a > 50% decrease from 2010 to 2015. The Autoimmune/Inflammation diseases exhibited a smaller, but sustained, decrease by ~30% during this period. 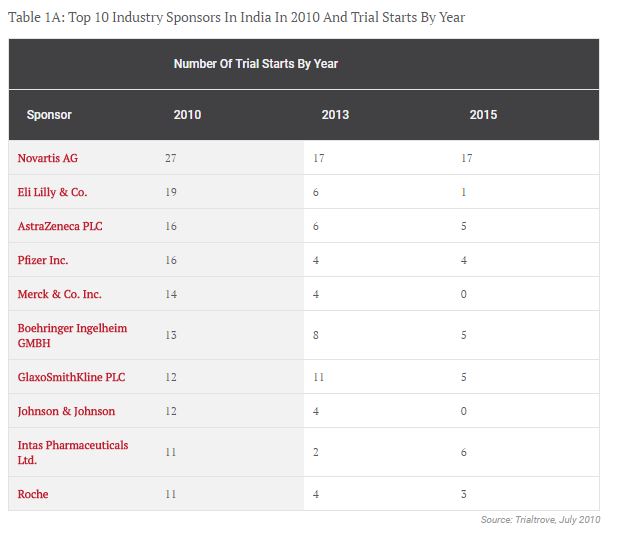 The collective drop in trial starts observed during this period, might be attributed to specific sponsors choosing to avoid India’s approval delays and increased regulations. However, it can be seen that the top 10 industry sponsors in 2010 all decreased their trial starts in India by 2013, and most dropped even further in 2015 (Table 1A). Interestingly, seven of these 10 companies, highlighted in Table 1B, still dominated the top positions in 2015, indicating that many of the 2010 primary players chose to stay active in India, but at a lower level. 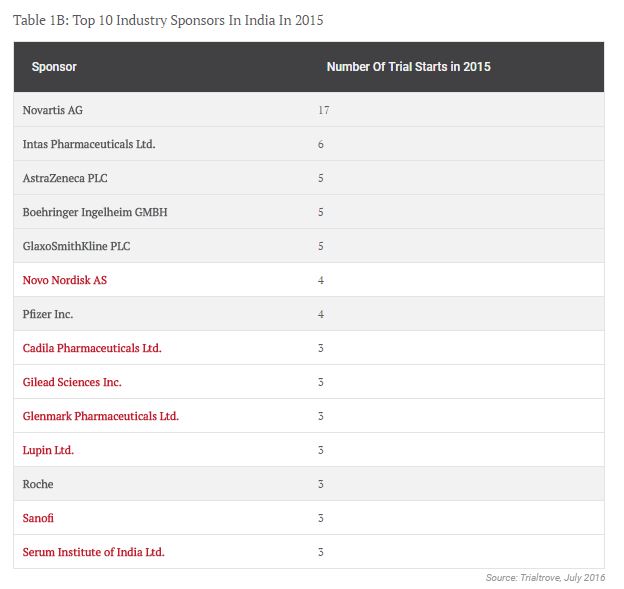 Since most of the top sponsors did not change, the disease focus of study starts in India might have been expected to also show little change. However, Trialtrove data indicates that the overall diversity of diseases dropped from 92 to 55 diseases, a decrease of about 40% (data not shown). While the top 10 diseases in India varied widely across these five years, the disease with the most starts in 2010, Type 2 diabetes, remained at the top, but with an 80% decrease in new trial starts between 2010 and 2015 (Table 2). 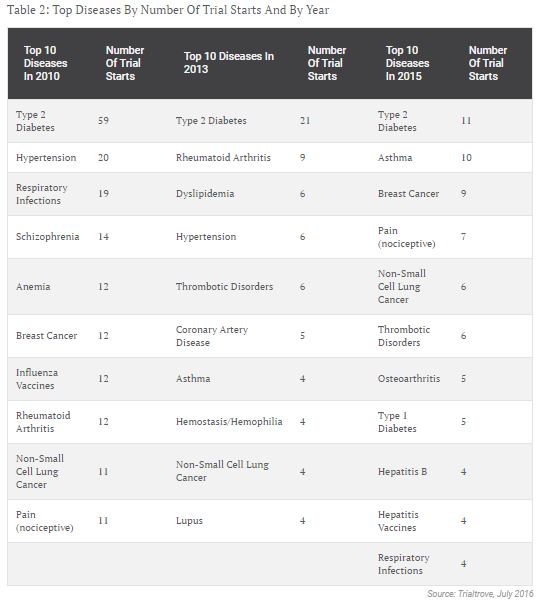 Will 2016 See A Rebound In Industry Trial Starts?

This analysis demonstrated how a dramatic decrease in Indian trial initiations followed the introduction of more arduous registration and approval processes there several years ago. Through 2015, this trend has continued, but there is an expectation that recent changes to more moderate Indian regulations for clinical trials, implemented early in 2016, may revive the country’s attractiveness for industry sponsored trial activity. (Also see "NIH Resumes Indian Trials, Will Others Follow? " - Scrip, 18 Jan, 2016.) It is still too early to tell if this year will see a rebound in study starts.