This genetic disease is believed to have its origin in Northern Europe [2].  Although HD is found in people of Japanese, Chinese, and African descent, it is still predominantly seen in people of European ancestry.  The United States National Institute of Health (NIH) estimates it affects 3 to 7 per 100,000 people with this ancestry.

This disease is devastating as symptoms usually appear between the ages of 30 to 50 which are prime income earning and child raising years.  They worsen over a 10 to 25-year timeframe.  Patients can develop personality changes, forgetfulness, impaired judgment, unsteady gait, involuntary movements, slurred speech, difficulty in swallowing and significant weight loss.

So, what’s the news regarding research to help these patients? Are there any bright lights? Happily, progress is being made as the US FDA approved Teva’s, Austedo (deutrabenazine), in April 2017.  This is only the second drug approved for Huntington’s chorea, a symptom characterized by excessive, involuntary writhing experienced by most HD patients.  This approval provides HD patients with an option in addition to Prestwick Pharmaceuticals’ Xenazine (tetrabenazine) to treat chorea.

Additional good news is seen in a search of Informa’s Trialtrove which shows 30 ongoing and planned trials in HD.   Many of these trials are Phase I–II as seen in Figure 1. These phases comprise 22 of the trials.  This concentration of trials below Phase III is not atypical as many compounds tested do not prove viable in the early phases. 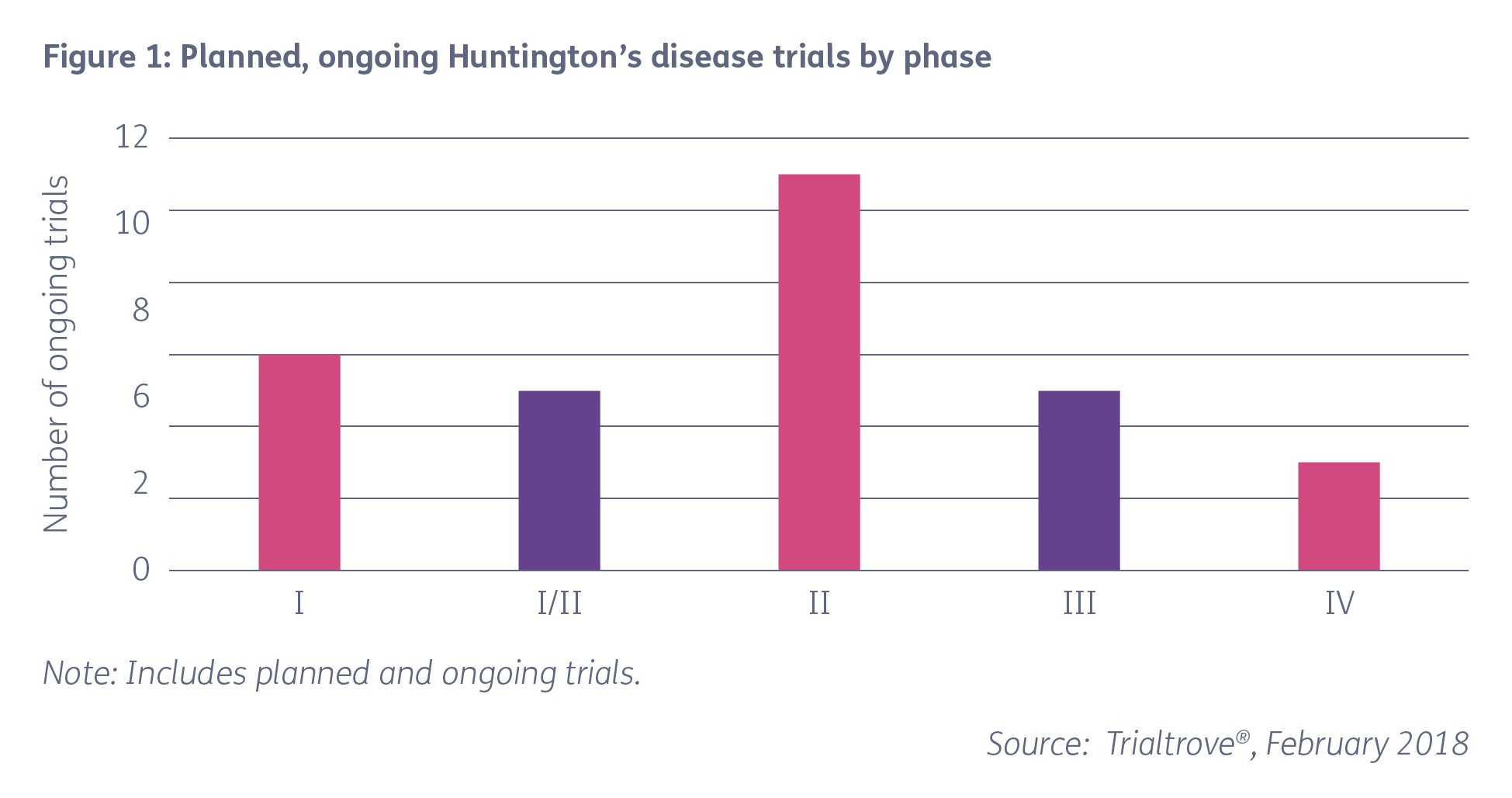 One Phase II trial of special interest is an open-label extension study evaluating IONIS-HTTRx, a drug seen as having much promise.  In fact, Francis Collins, director of the NIH, recently tweeted, “this is a promising new therapeutic for Huntington’s disease which if shows promise in Phase III clinical trials will be the first drug to directly target the cause of HD” [3]. What a huge milestone as previous drugs approved for HD simply treated symptoms while IONIS-HTTRx moderates the underlying genetic cause of HD by reducing the production of the toxic mutant huntingtin protein (mHTT).  IONIS-HTTRx is an antisense drug designed to reduce the amount of huntingtin RNA in the brain.  Once less RNA message is available, less huntingtin protein is made [4]. Roche showed its belief in the drug’s potential by exercising its option to license this compound from Ionis Pharmaceuticals in December 2017.  This was following the successful completion of the Phase I/IIa study of IONIS-HTTRx in people with HD.  Getting a later start in development is Wave Life Sciences’ WVE-120101 and WVE-120102, which each target a single nucleotide polymorphism (SNP) that marks a separate and distinct location on the mHTT gene transcript. This drug program is the first to target the underlying cause of HD with an allele-specific approach [5].  These programs are in Phase Ib/IIa.

Roche and Wave Life Sciences are two of 18 companies sponsoring planned or ongoing trials in HD.  It is exciting to see strong pharma and biotech interest in this disease. The companies are diverse, ranging in size from Big Pharma, such as Teva and Roche, to the previously mentioned WAVE Life Sciences, a biopharmaceutical firm conducting its first clinical drug program.

Besides the three drugs by WAVE Life Sciences and Roche targeting the huntingtin protein, many additional targets are being evaluated as seen in Figure 2

For seven of the drugs, the companies have still not released their targets.  The two drugs which target Vesicular Monoamine Transporter Type 2 (VMAT2), a class of compounds that has demonstrated to have success in treating Central Nervous System movement disorders, such as Huntington’s chorea [6], are Teva’s Xenazine (tetrabenazine) and SOM Biotech’s bevantolol.  While Xenazine is a new compound, bevantolol is an old antihypertensive which is being repurposed to treat Huntington’s chorea.

The drug for which the target is listed as Not Applicable is Prana Biotechnology’s PBT2.  This drug is designed to interrupt interactions between normally occurring biological metals and target proteins in the brain.   The remaining nine targets are each associated with one drug.  This number of targets might be thought to enhance the odds for success in treating this disease, or as has been seen too frequently with rare diseases, signal the desperation for success as target after target is found unable to provide symptom relief or a cure.  Time will show which is true in this endeavor to relieve symptoms and cure HD.

All in all, the HD clinical trial landscape is dotted with potential. Industry, both large and small, is not ignoring this cruel disease. There are finally drugs being tested which can cure HD rather than solely provide relief of symptoms.  This means there is hope in HD research.  What a cause for celebration if one of these treatments delivers the knock- out punch to Huntington’s Disease! It would be fantastic if there would be one less disease to remember on future Rare Disease Days.  Until then, please do remember Huntington’s disease on February 28, #Rare Disease Day!

4 Huntington’s Disease Society of America (2018) Breaking News:  Update on the Status of the Ionis-HTTRx Program and Its Future. Available from: http://hdsa.org/news/breaking-news-update-on-the-status-of-the-ionis-httrx-program-and-its-future/ [Accessed February 21, 2018].