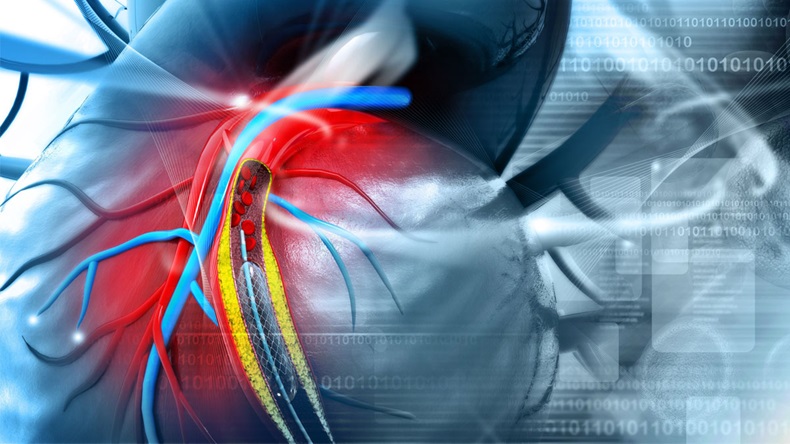 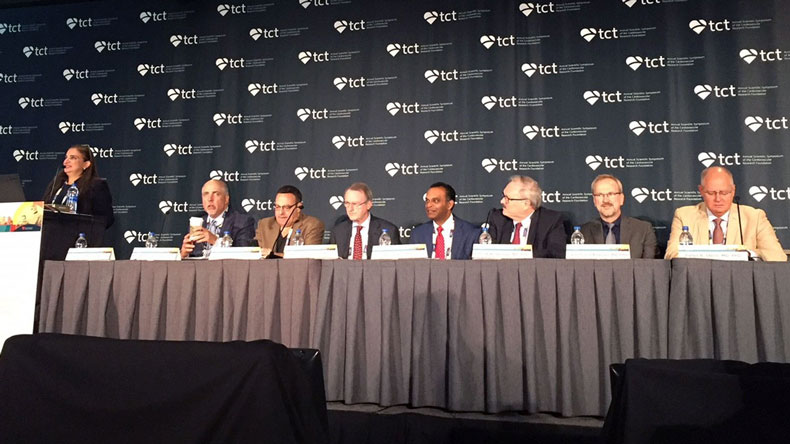 Study chair Patrick Serruys from the Imperial College London, England and Erasmus University, Rotterdam, presented the results at the TCT meeting. The primary composite endpoint of cardiac death, target-vessel myocardial infarction and clinically indicated target lesion revascularization (TLR) at 12 months was 5.3% with Xience and 4.9% with Supraflex, a difference that met criteria for noninferiority (p < 0.001). In a per-protocol analysis, Supraflex had a lower rate of TLR (1.2% vs 3.1%, p = 0.021) and a non-significantly higher rate of cardiac death (1.1% vs 0.3%, p = 0.084).

During the panel discussion, David Cohen from Saint-Luke's Mid America Heart Institute in Kansas City, Missouri, said these are "strong results," adding "if it's that cheap, I think people will want to use it."

In February 2017, India's government capped the price of coronary stents at $440 for drug-eluting stents and $110 for bare metal stents and pushed many major stent-makers out of the market. But over 90% of the 550,000 stents used annually in India are drug-eluting stents, and the Indian market will grow around 15% annually and is expected to become the second largest international market after China by 2020, so there is a great opportunity for a less-expensive drug-eluting stent.

Cohen doubts if companies that make these types of stent can bring the type of innovation that big stent makers with big R&D programs deliver, "any $440 DES that works this well has got to be pretty useful."

Both stents have thin-struts, but the Resolute Onyx is designed to enhance radiographic visibility, is slightly thicker than the Orsiro, and has a durable polymer.

Definite or probably stent thrombosis occurred in one patient in the Resolute Onyx group and nine in the Orsiro group, but von Birgelen noted that the study was not powered for stent thrombosis and results need to be confirmed in larger clinical trials.

Investigators noted that thinner struts and the shape of the stent could potentially lower the risk of stent thrombosis.

Rao also noted that the "rapidly decreasing strut thickness was making the stents harder and harder to see, which presents potentially technical challenges" for implantation and postdilatation.

David Kandzari of the Piedmont Heart Institute of Atlanta, who later that morning presented findings of the BIOFLOW-V study which also uses the Orsiro device, however, toldMedtech Insightthat strut-thickness and trade-offs on visibility are not especially a concern in interventional cardiology.

"Thinner struts may have reduced visibility, but it can be augmented with the inclusion of different metals that can enhance visibility to the operator," Kandzari said. Visibility, he said, "comes into play principally in the postdilatation component of the procedure where we simply want to be able to see the margins of the stent so the post-dilatation balloon doesn't extend beyond those margins."

"One unique aspect is the ultra-thin strut stent design," he said. Evidence that associates an ultra-thin strut stent design with lower outcomes of myocardial infarction and stent thrombosis is emerging. The large numbers of stent-trials ongoing provides an opportunity for variable and unexpected results. "We need to start looking more for themes or consistent findings across the clinical trials."

"We need to start looking more for themes or consistent findings across the clinical trials," said David Kandzari.

He said it is especially important in trials like BIONYX to observe the longer-term follow-up.

"It may be that one year alone may not fully represent potential differences or opportunities to see differences between these two stent designs and the BIOFLOW-V trial data are a good example of that now after two years."

US FDA approved Resolute Onyx in 2017. The Orsiro stent has CE Mark approval in Europe and has not yet been approved for marketing in the US.

Kandzari said it is especially important in trials like BIONYX to observe the longer-term follow-up. "It may be that one year alone may not fully represent potential differences or opportunities to see differences between these two stent designs and the BIOFLOW-V trial data are a good example of that now after two years."

In his presentation at TCT, Kandzari said that the trial not only demonstrated the noninferiority of Orsiro, but superiority for one-year target-lesion failure and target vessel-related myocardial infarction.

"Altogether these findings not only advance a new standard of comparison for drug-eluting stents, but should direct our attention to strut thickness and polymer composition as key elements for additive drug eluting stent development," he said.

David Kandzari presenting results of the BIOFLOW-V study at TCT. 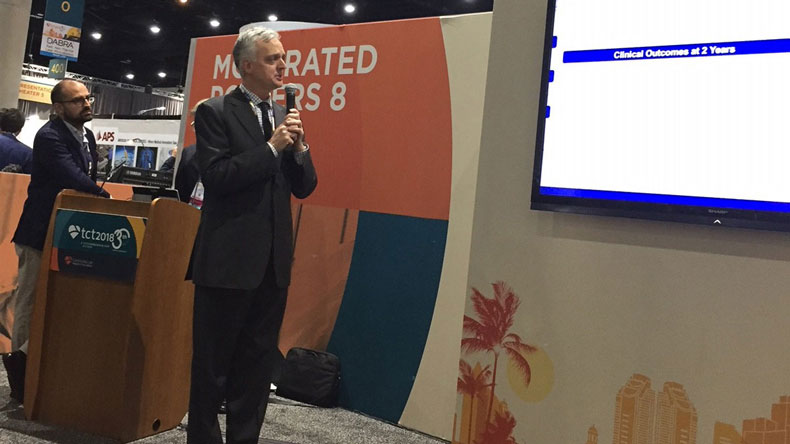 Commenting on a question from an audience member on strut thickness, Kandzari said, it's hard to isolate one singular element. While strut thickness is very important, he said, "we need to think about the whole metallic footprint of the stent, including strut width, strut thickness and the number of struts themselves" as well as the role of the bioresorbable polymer and its biocompatibility. For the Orsiro, he said, full degradation of the polymer does not occur until beyond one year after stent implantation.

Lisette Okkels Jensen from the Odense University Hospital in Denmark presented findings of the SORT-OUT IX study, a head-to-head comparison of the polymer-free biolimus A9-coated BioFreedom stent and Orsiro in a total of 3,151 all-comers patients.The findings suggest that the BioFreedom stent is not as effective as Orsiro.

It is important to note that the BioFreedom stent is a relatively thick stent compared to the ultra-thin Orsiro stent. Panel member Philip Urban from La Tour Hospital in Geneva, Switzerland said he believes that the higher rate of target lesion revascularization is likely due to the thickness of the BioFreedom stent, but he agreed that BioFreedom is safe.

Kandzari told Medtech Insight that the BIOFLOW-V trial was a very vigorous trial with FDA oversight, performed with the intent of regulatory approval and very detailed patient contact and follow-up of endpoints. By comparison, SORT-OUT IX is a population trial with records ascertained from a national health care database rather than direct contact with patients with detailed oversight.

"There are very different methods of coming to a result and therefore not only may the results differ, but the questions answered by these trials may be very different as well," Kandzari said. He said the BIOFLOW-V helps answer questions about potential differences in drug-eluting stent and outcome differences while the SORT-OUT IX study may provide answers on how patients fare on a population level in Denmark.

The study is designed to support US FDA-approval of the polymer-free biolimus A9 drug-eluting stent. BioFreedom stent is available in Europe.

Polymers in first- and second-generation drug-eluting stents can be a trigger of the chronic inflammation that leads to stent thrombosis necessitating anti-coagulant therapy and patients at high risk for bleeding could not tolerate prolonged dual-antiplatelet therapy. Polymer-free drug-eluting stents were designed to avoid this.

LEADERS FREE II piggybacked off the original LEADERS FREE trial and included 1,189 patients at high risk of bleeding who were treated with a bare metal stent and 1,148 US patients treated with the BioFreedom stent. The trial met superiority criteria for both its primary safety endpoint of cardiac death/MI (8.6% vs 12.3%; p = 0.0025 for superiority) and its primary efficacy endpoint of target-lesion revascularization at one year (6.1% vs. 9.3%; p = 0.0111 for superiority). Bleeding rates were similar between the two groups, he said.

Krucoff said he believes that the stent should be approved for high bleeding-risk patients, but he cautioned that there is still a lot to learn in this area.

"These are patients who by and large have been excluded from every pivotal drug-eluting stent study and every pivotal dual antiplatelet therapy study," he said. "Currently, in American practice, some centers are still putting bare-metal stents in double-digit numbers of PCIs in their institutions. I think bringing this stent forward with a label of 30 days in high bleeding-risk patients is a yes."

Kandzari told Medtech Insight that focusing on the polymers themselves may be an oversimplification.

"Polymers can have positive properties and in other instances they may have negative properties, so they need to be considered on an individual basis."

Cre8 proved noninferior to the permanent polymer stent for target lesion failure at 12 months (6.2% vs. 5.6%; p = 0.0086 for noninferiority) with similar rates of adverse clinical events at 12 months (12.2% vs. 11.6%). The results were maintained throughout several subgroups.

Amphilimus sirolimus-eluting stents have shown promising results in diabetic patients. In a substudy of 304 diabetic patients in ReCre8, however, there was little difference between the Cre8 and Resolute Integrity looking at TLF (7.3% vs. 7.8%).

After the presentation, Cohen raised the question that with comparable results, is there a reason to choose Cre8 when permanent-polymer drug-eluting stents work just as well? Stella responded that the stent is easy to use and that the three-year data might offer more details about target-lesion failure outcomes.