Last year saw a continuation of the emerging trend within oncology of developing drugs that are tumor agnostic, designed to be used in patients whose tumor is characterized not by its location, but rather by a molecular or genetic signature. Most recently, the FDA approved Roche’s TRK inhibitor Rozlytrek (entrectinib) for patients with NTRK gene fusion-positive solid tumors, prompting then-acting FDA commissioner Ned Sharpless to effuse about the therapeutic potential of this personalized, precision oncology approach [1].

“We are in an exciting era of innovation in cancer treatment as we continue to see development in tissue-agnostic therapies, which have the potential to transform cancer treatment.”

In this piece, we seek to explore whether tumor-agnostic drug development is set to become more prevalent and part of best practice within oncology R&D, and to determine the ideal characteristics of a development program that make it amenable for a tumor-agnostic label. In this way, we can identify the pipeline for next-generation tumor-agnostic drugs and guide the ideal trial strategies for these potentially transformative candidates.

Agnostics represent a continuation in the shift towards precision oncology

There are countless targeted oncology drugs that have broad labels and mechanisms that span several tumor histologies. However, the mechanism of a targeted oncology drug is just one of three important factors that must converge for a drug to be deemed tumor agnostic by regulators. In order for a drug to be truly agnostic, it must be tested in an agnostic fashion. This requires diagnostics to identify and segment patients according to the biomarker of interest, and also basket clinical trials to recruit patients with a diverse range of tumors.

To date, just three drugs have successfully pursued such a label. Merck’s Keytruda (pembrolizumab) led the way with its approval for microsatellite instability-high (MSI-H) and mismatch repair deficient (dMMR) advanced solid tumors in May 2017, following collaborative work with researchers at Johns Hopkins University while the checkpoint inhibitor class was still at an investigational stage. Two TRK inhibitors have subsequently gained approval for patients with tumors driven by NTRK gene fusions – the aforementioned Rozlytrek was preceded by the first-in-class drug Vitrakvi (larotrectinib; Bayer) in August 2019 and November 2018, respectively. 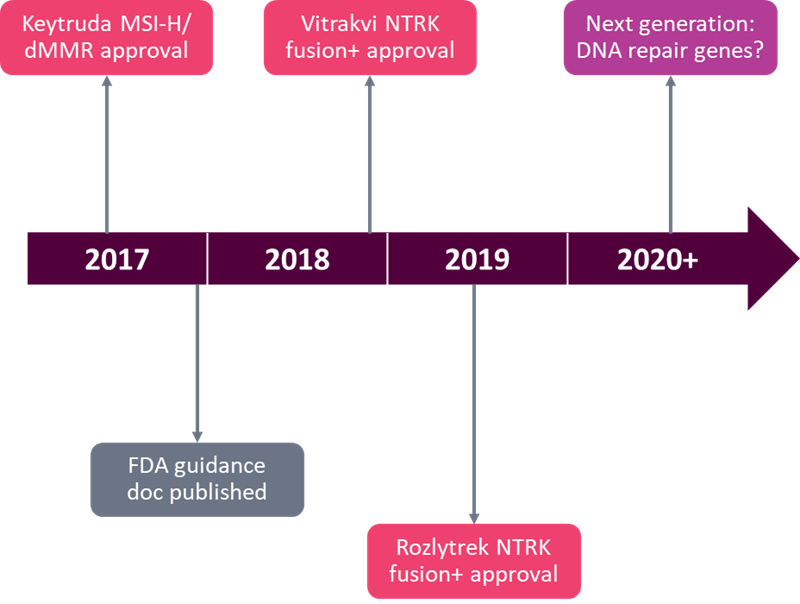 In the case of the TRK inhibitors, this novel path to market was driven as much by necessity as the science itself. NTRK gene fusions have a very low prevalence in the main solid tumors, while certain histologies such as secretory breast carcinoma, in which NTRK is strongly implicated, are very rare. It is therefore difficult or impractical to conduct large clinical trials in these distinct populations, requiring a more flexible approach from developers and regulators. However, increasingly developers will be faced with the conscious choice about whether to pursue an agnostic label or a more conventional tumor-specific program. This requires careful consideration of the science, in addition to balancing the clinical and commercial opportunity, which may be somewhat smaller as cancers are overwhelmingly treated by a paradigm that still focuses on tumor location as a primary driver for decision making. Nevertheless, tumor-agnostic cancer drugs offer the realization of personalized medicine, as patients are matched to the most appropriate treatment possible due to the exact nature of their cancer, affording the potential for superior patient outcomes in the form of stronger and more durable responses, and avoiding the side effects of unnecessary chemotherapy.


Each of the approved tumor-agnostic treatment settings share certain hallmarks that have led to the success of their clinical programs, and other developers should certainly take note of these. There are also instances – Roche’s tumor-agnostic development of its BRAF inhibitor Zelboraf (vemurafenib) being the most commonly cited – that provide cautionary examples. We have condensed the learnings from these into a single checklist, containing both required and non-essential, preferred criteria, that can serve as a framework for evaluating future oncology development programs.

1.    Most fundamentally, you need to have convincing preliminary data showing that your mechanism is effective across multiple histologies with a common biomarker. The latest FDA guidance document for targeted therapies suggests that in vivo and in silico evidence can be used to support further study, while clinical data are clearly preferred for grouping discrete patient groups together [2].
2.    While this is more aspirational than practical, the better the understanding is around the science of the tumor, biomarker, and drug mechanism, then the less likely unforeseen hurdles can trip up a development program. In the example of Zelboraf, the drug is ineffective in colorectal cancer in part because of an EGFR-mediated escape mechanism, although this does not account for the whole picture.
3.    In order for the agnostic drug to have any commercial application, there must be the infrastructure in place to readily test for the biomarker of interest and identify eligible patients. The ideal biomarker would be included within next-generation sequencing assays, to capitalize on the wealth of patient data that is to be collected, and to capitalize on the potential for upfront treatment should patients be screened at diagnosis.
4.    One common feature of each of the agnostic approvals so far has been the speed of clinical development, with regulatory approval coming within five years of program initiation. A close working relationship with regulators, and crucially support for following agnostic development rather than specific tumors, is highly recommended, especially as each program is likely to be unique with such limited precedent.
5.    The first preferred, albeit non-essential, criterion is entering a treatment setting where there is no current standard of care. This ensures that your drug can be tested against placebo, or in an open-label design without an active comparator, lowering the clinical threshold, while addressing unmet need will aid regulatory passage.
6.    Tumor-agnostic development is preferred for newer drug targets or mechanisms, partly because this means that clinical trials would be less likely to require an active comparator with a drug in the same class. Furthermore, there would be diminishing returns for continued investment in an older drug, considering that conventional clinical development has likely identified a large proportion of potential responders within specified tumor types already.
7.    The science should guide the development program, and we would caution against pursuing an agnostic label after retrospectively observing subsets of patients with efficacy that seem to fit a secondary hypothesis. Salvaging an otherwise failed trial via post-hoc analyses is unlikely to gain much traction with regulators, considering the need for solid scientific underpinnings for any tumor-agnostic label.
8.    If the pipeline drug can be tested within a large, well-defined single tumor type, focusing on a homogeneous patient population will likely be the lowest risk path to market. Expansion to a tumor-agnostic setting could still be advisable, but commercial dynamics may mean that this should be a label expansion strategy, instead prioritizing preferential positioning within a given histology first.


Will PARP inhibitors be the next agnostic class?


Unlike when the TRK inhibitors were still in the pipeline, it is not immediately clear where the next agnostic approval will come from. Despite the scientific attraction and clinical promise of pursuing multiple tumor types at the same time, industry has so far remained relatively conservative and instead commonly chooses to follow the tried and tested method of identifying the single tumor type with the best response first and then expanding from there. According to Trialtrove, industry is sponsoring an ever-increasing number of basket trials – typically involving either checkpoint inhibitors or tyrosine kinase inhibitors, as per the approvals we have so far – but registrational basket trials are still few and far between. Their most common role is in early-stage clinical development, designed to rapidly identify and confirm the patients that demonstrate the best response to drug treatment, with the individual cohorts being expanded, and/or new, tumor-specific trials initiated.

One target that stands out and is worth individual mention is PARP. Inhibitors of PARP, an enzyme involved in repairing single-stranded DNA breaks, are already established as part of the standard of care for breast and ovarian cancer among patients with BRCA mutations. Further study is expanding the class into new settings such as prostate and non-small cell lung cancer, including as part of combinations with other drug classes. Another avenue that holds clinical promise is a potential agnostic indication among patients with mutations in DNA repair genes, including but not limited to BRCA. AstraZeneca, a leader in the PARP class, is developing a 15-gene panel to identify patients with alterations across a range of genes involved in homologous recombination repair (HRR).

Patrick Mahaffy, CEO of Clovis Oncology, has spoken of the potential for developing his company’s PARP inhibitor Rubraca (rucaparib) in such a way, with pivotal development potentially initiating in 2020 [3]. The combination of PARP inhibitors with a PD-1 backbone in particular has strong scientific rationale and synergy in patients with DNA repair defects, and could greatly expand the class’s eligible population.

Comparing PARP inhibitors against other targeted oncology drugs being evaluated in basket studies, we assess that these have the highest likelihood of achieving an agnostic oncology indication. Considering the clinical evidence for PARP inhibitors against the tumor-agnostic development checklist described, it certainly meets the important, required criteria. So, as we begin a new decade, look for anecdotal statements from biopharma executives to translate into cold, hard fact in the form of pivotal clinical trials and new, defined agnostic patient populations such as those with DNA repair mutations.