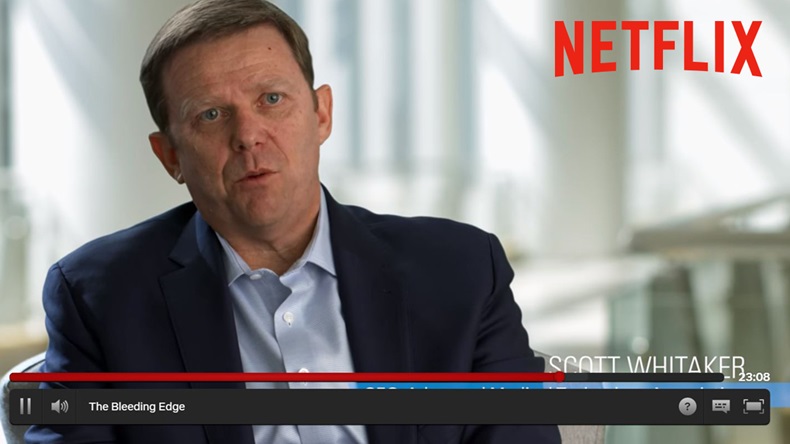 A new Netflix documentary by Oscar-nominated director Kirby Dick is highly critical of the medical device industry and US FDA. While the film is receiving acclaim and attention, the top lobbyist at AdvaMed says it's nothing but an "entertainment piece" and a "hit job" that misleads viewers about how products get to market.

The documentary, "The Bleeding Edge," looks at how devices are regulated in the US. It showcases examples such as Bayer AG' s Essure contraceptive device, which was recently yanked from the market by the company after a series of serious adverse events were recorded around the world.

The filmmakers present a narrative where medtech products are able to reach the US market with less scrutiny under FDA's 510(k) clearance process compared to the pre-market authorization pathway. They paint a grim scenario where patients are put at risk at the cost of profitability, and list potential conflicts-of-interest between the device industry and several FDA commissioners, including the current one, Scott Gottlieb.

Speaking to Medtech Insight, AdvaMed CEO Scott Whitaker – who is featured in the documentary – slammed the film, saying it should not be labeled a documentary at all. He also said it makes assertions that are not backed up by facts. He argues the documentary conflates the PMA process with the 510(k) process, and sends a message that all products should be evaluated the same – regardless of level of risk.

"We more than anyone else want every product on the market to be safe. We're very, very focused on making sure that whatever process our companies initially choose to pursue with the FDA is reviewed and vetted by the FDA and verified as the right path in order to get safe and effective products to market," Whitaker said.

"If the FDA comes back and says no [to a sponsor] – and the FDA has all the authority to say no – they can do that, and [those firms will] comply," he said. After all, the agency is "the regulatory experts from a safety and effectiveness standpoint, from the government's perspective."

While FDA's mission is to ensure public safety, Whitaker emphasized that industry's objective is also to ensure that only safe and effective products get to market, and as quickly as possible.

Asked if he thinks the documentary will have any potential political ramifications, Whitaker would not rule out the possibility of a legislative push to change the regulatory oversight of medical devices, but said that's highly unlikely.

Based on his experience in Washington, DC, working on legislative matters both in Congress and as chief of staff for the Department of Health and Human Services, Whitaker said he believes lawmakers are going to look at the documentary within the context of the broader medical device ecosystem.

"I've been in this town a long time [and] I don't believe serious policymakers are going to look at a film like this and make policy and regulatory judgments based on what they said. Because people in this town are smart enough to know that it was an entertainment piece, that it was not fact-based, that it distorted quotes that not only I made but others made, and as a result of that it's not a basis for changing the regulatory process, that by and large has worked very, very well," Whitaker said.

Having spoken to offices and staffers on Capitol Hill, Whitaker said his contacts have all voiced the same concern that it was "clearly a hit job by Netflix to drive traffic to their site."

Whitaker said in the process of making the documentary and speaking on camera with the filmmakers, he continued to communicate with his members about how conversations with the documentarians were going. He said everyone was a bit concerned that it would be an entertainment documentary rather than a fact-based documentary, a concern he says seems to have been well-founded.

While he said the documentary seems to have been successful purely from an entertainment perspective, Whitaker argues that it was "incredibly flawed."

AdvaMed spokesman Greg Crist told Medtech Insight that the group hasn't received a lot of calls about the movie from its members since it premiered. And he surmises that it won't have staying power to drive a narrative that could raise questions that lead to legislative change.

"We welcome these questions because unfortunately in this town, where there are so many distractions and so much political white noise, [Congress sees only] 5% to 7% of the picture, and we welcome the opportunity to give them the rest so they can see for themselves the full context," he said.

Whitaker concurred with the idea that this is unlikely to raise eyebrows on Capitol Hill.

"I don't think this film changes anything. I think it provides some folks with an anecdote here and there," he said. "I have more confidence in lawmakers.. I think they will not just look at an entertainment piece like that and then make policy judgments based on that."

Whitaker also argues the film is being pushed by trial attorneys who are interested in using it for their own litigious interests. But he said once lawmakers look beyond the rhetoric, he is confident they will see the documentary in the same way industry does.

In the meantime, the lobby group is communicating with members of Congress about the "facts and fiction" associated with the film, and is speaking to their members on how they are educating policymakers on the realities of device regulations.

FDA uses a risk-based approach to reviewing medical devices so higher-risk products require more evidence. The agency also has requirements for products that go through the 510(k) process in terms of levels of acceptable risk and how closely the product functions to a predicate device that is already on the market. While the documentary appears to argue that FDA's pathways for reviewing different products with different levels of risk has created a system that is putting patients at risk, Whitaker said the system is sound.

AdvaMed's Crist said the documentary was misleading to viewers because the film suggests industry decides how the review process works, but he argues that's far from the truth.

"FDA decides if a device goes through 510(k), PMA, or whatever is required," he added.

'Bit Of A Stretch'

Despite AdvaMed's conversations with director Kirby Dick to explain how the review process works, certain explanatory information failed to make it into the film, Crist said, including that safety determinations take more than observing devices in clinical trials and that FDA has a post-market surveillance system.

Whitaker noted there are more than 177,000 classes of devices, of which a small proportion have been found to result in serious adverse events.

"You're talking about a large number of devices, and a significantly small percentage of those devices have had major issues," he said. "Looking at the current model, and as people talk about what needs to change, let's not forget the many patients who have benefitted from the process in bringing products to market."

The movie was a "bit of a stretch," Whitaker added.

"We are disappointed that the information we provided was not reflected in the film," FDA says.

Another argument made in the documentary seems to be that much of FDA's regulatory authority hasn't changed for decades to allow it the flexibility to change with the times. AdvaMed, however, challenged that narrative, pointing out that there has been several important legislative items that have materialized over the years, such as those to ensure that 510(k) products are required to have a predicate currently on the market and changes through the periodic user fees such as MDUFA IV.

"We have always said all along that the regulatory process should evolve with the technology, and I don't think we would change our view on that," Whitaker said.

Crist noted there are strict mandates for how devices can be regulated through legislation, such as the Safe Medical Devices Act of 1990 and the fact that FDA has surveillance programs to flag safety issues. He also argues that multiple studies have shown that less than 0.5% of 510(k) devices have been the subject of serious recalls.

And Crist worries that patients who watch the documentary won't get the full picture and may be too afraid to use medical devices that could save their lives. He says the film is tantamount to "gaslighting," when a person is manipulated into questioning reality.

Medtech Insightalso reached out to the Medical Device Manufacturers Association to talk about the documentary. MDMA CEO Mark Leahey issued a statement calling the film "reckless," saying that it "only serves to frighten" millions of Americans who rely on medical technology.

Similarly, FDA spokeswoman Deborah Kotz said the agency chose not to participate in an interview for the documentary but did provide extensive responses to questions posed by the filmmakers to provide a "balanced viewpoint of medical devices."

"We are disappointed that the information we provided was not reflected in the film," said the agency in a release. "We recognize that such devices, as with any medical product, have their risks, and that discussion and recognition of these risks is vitally important. But the film inaccurately portrays several areas related to the FDA’s regulation of medical devices, among other inaccuracies, most importantly, our mission to protect patients and provide them with timely and sustained access to high-quality, safe and effective medical devices."

The agency made arguments in its written statements about the need to take a risk-based approach to regulating medical devices, its ability to conduct post-market surveillance and its authority to require post-market trials. The arguments are similar to what Whitaker and Crist spoke of, but FDA noted the filmmakers did not use those statements to provide more context.

FDA also highlighted the fact that it is building the National Evaluation System for health Technology (NEST), which is expected to improve surveillance, signal management and mandated post-market studies, and has the potential to support studies designed to answer specific device safety questions.

"The plan outlines how the FDA will encourage innovation to improve safety, detect safety risks earlier and keep doctors and patients better informed," FDA said. "Our plan would establish a robust medical device patient safety net in the US. We are taking steps to streamline and modernize how we implement post-market actions to address device safety issues to make our response to risks more timely and effective."