President announces Merck, Pfizer and Corning collaboration on new glass packaging for injectable drugs as part of "Made In America Week;" says FDA is streamlining regulations. 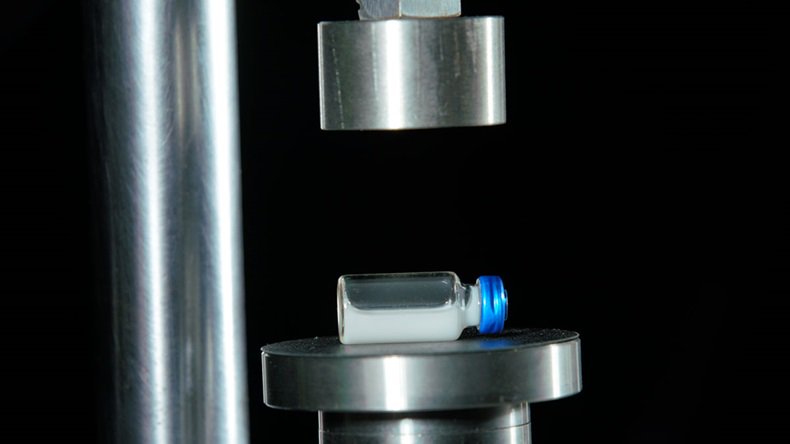 President Trump pulled big pharma into the celebration of his "Made In America Week," using the event to unveil new pharmaceutical glass packaging that Corning developed in partnership with Merck and Pfizer.

A Corning spokesperson said the new product, called Valor Glass, is currently commercially available and that the timing on when medicines are in the new packaging depends on customers' approvals and deployment plans. The new product is expected to be made at two current Corning facilities in New York and New Jersey and at a new manufacturing plant, the location of which is to be decided within the coming months.

Frazier said he was grateful for the Administration's continued support of American innovation and manufacturing and was proud to have collaborated with Pfizer and Corning.

"Merck engineers and scientists worked side by side with Corning's glass experts to make this exceptional glass a reality," Frazier said. He noted that occasional breaks and cracks in glass packaging have been a fact of life for the pharmaceutical industry and that the new technology will reduce damage, increase industry's processing rate and help ensure reliable access to medicines for patients.

Frazier said Merck plans to convert several injectable products to the new glass as soon as it works through approval and review with FDA.

Read said the innovation is a "potential game changer." He noted that glass represents about a $4bn expenditure for the pharmaceutical industry. A White House blog posting stated that until now, 98% of this $4bn pharmaceutical glass manufacturing industry had been done overseas.

Read also took the opportunity to address other issues of concern, saying he was "looking forward to working with the Administration on both its regulatory policy and tax reform to ensure we can be competitive."

Weeks told Trump the force was equal to a punch from a professional boxer, to which Trump replied, "People never knew that about me."

Corning played the key role in having the collaboration announced at the White House. "The announcement was made at the White House in order to recognize what is possible when leading American innovators working together with support from government agencies can deliver news that is great for patients, for industry and for the economy," a company spokesperson said. She noted that the timing ended up working out so it aligned with the Made in America Week.

The event illustrates that Trump has developed a positive relationship with the pharmaceutical industry. He first met with industry executives in January to discuss drug pricing and regulatory reform. (Also see "Carrots and Stick: Biopharma At The White House" - Pink Sheet, 31 Jan, 2017.)

At the White House event, Trump suggested that good news for pharma would be forthcoming for the pharmaceutical industry on the regulatory front.

"We have tremendous excitement going on at the FDA. Amazing things are happening there and I think we're going to be announcing some of them over the next two months," he said. "We are going to be streamlining, as we have in other industries, regulations so that advancements can reach patients quickly. You're going to see a big streamlining. I think you already have to a large extent."