With the announcement that tuberculosis (TB) surpassed HIV/AIDS in attributable deaths from infectious diseases worldwide, there has been a renewed interest in the development of new treatments and regimens for dealing with what is now the world’s number one infectious disease killer. In 2015, the number of TB attributed deaths totalled 1.5 million, outnumbering the 1.2 million deaths due to HIV. While this represents a 47% fall in mortality from TB since 1990, the World Health Organisation (WHO) estimates that the vast majority of deaths that occurred were preventable, which is problematic given the estimated 9.6 million new cases of TB in 2015 alone. (1)

Tuberculosis is a contagious airborne disease caused by the bacterium Mycobacterium tuberculosis. It is largely a respiratory infection and up to a third of the world’s population may be latent carriers of M. tuberculosis. Thankfully, latent TB is not contagious or symptomatic but carriers have a 5-10% lifetime chance of developing active TB, which is greatly exacerbated by a patient having a compromised immune system from HIV/another disease or immunosuppressant drugs. (2) Exacerbating the issue is the steady rate of drug resistant tuberculosis (DR TB) or multidrug resistant tuberculosis (MDR TB) (prevalence estimated to be 3-5% of TB cases worldwide). There have also been sporadic reports of extremely drug resistant TB (XDR TB) which appears to be resistant to all the agents currently used in TB treatment. (3)

Since TB is largely treatable with long term courses of multiple antibiotics, TB deaths are concentrated in low and mid-level developed countries where access to diagnosis and treatment may be limited. Current first line treatments consist of four anti-TB agents (isoniazid, rifampicin, ethambutol and pyrazinamide) administered for 6+ months. These are not always successful, often due to DR or MDR TB, and second line treatments may take up to two years with serious side effects possible depending on the combination of agents used.

With the rise of various drug resistant strains over the past decade and the often severe side effects of second or last line treatments, there is a pressing need for new treatments to counter the chance of a XDR TB epidemic emerging, as well as to provide greater options to both patients and treatment providers. Luckily, over the past decade the pharmaceutical industry has responded to this need and the numbers of TB treatments under development by pharmaceutical companies or public-private partnerships has increased. During the late 90’s, there were around 20 TB drugs in active development, which grew to nearly 60 active developments in 2007 and further increased to a high water mark of 83 in 2013 (Figure 1).

Figure 1: Number of compounds under development for tuberculosis treatment by year. 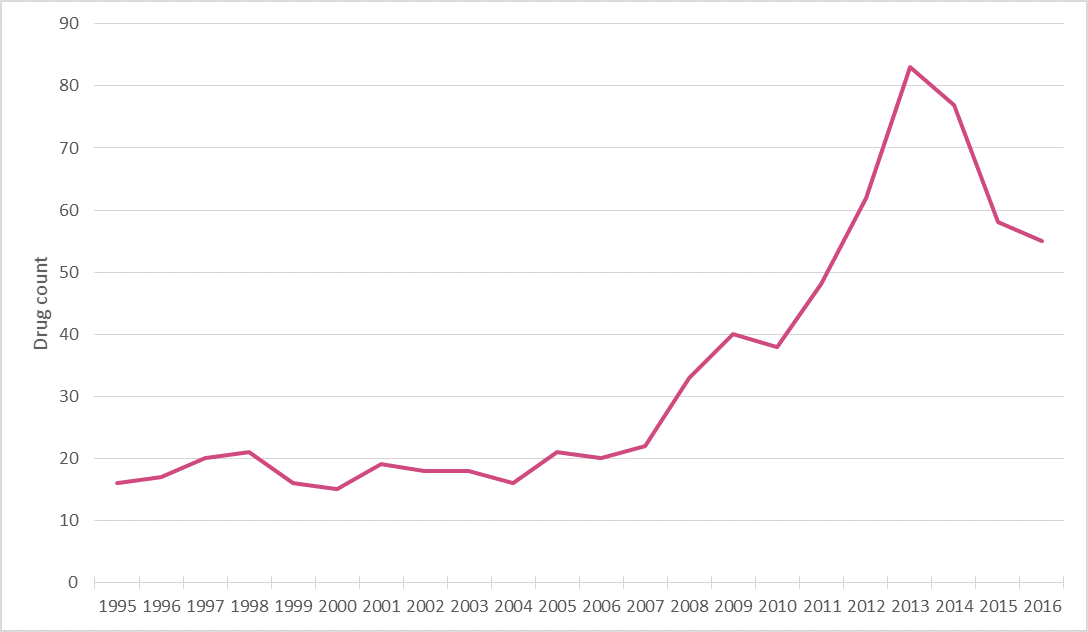 The vast majority of TB treatments are in preclinical development stages and are largely unproven (Figure 2) but the greatly increased number of candidates in the past decade provides reassurance that the field is not wholly neglected.

However, if compared to development of antivirals for HIV, it can be seen that only recently has the number of drug candidates begun narrowing the gap. This is partly due to the increase in new TB drugs and also due to a reduction in HIV antiviral development post 2008.

Figure 3: 20 year comparison of TB and HIV drugs under development.

There are three broad categories the development candidates follow. Firstly, repurposed drugs (usually antibiotics) in a higher stage of development for other indications that are also being tested for TB. The second category is vaccines against TB, which are being developed for therapeutic as well as prophylactic use, and the final and largest group is novel anti-TB drugs, primarily new antibiotic compounds. The major player in new late stage drugs for TB is TB Alliance. They are a not-for-profit organisation that collaborates with pharmaceutical companies on pursuing novel compounds and focuses on the development of new combinations of drugs to treat TB with an emphasis on affordability and availability.

Four candidates are in phase III trials, one of which is a vaccine originally developed as an immunotherapy for non-small cell lung cancer (Immuvac, Cadila Pharmaceuticals). The other three late stage candidates are antibiotic compounds; one, a quinolone antibiotic (moxifloxacin, Bayer/TB alliance), is already launched for a number of antibiotic indications and is intended to replace some of the compounds in standard first/second line TB treatment regimens with a better side effect profile and lower resistance odds. Another is an ethambutol analogue intended as a possible replacement to ethambutanol (Ethylenediamine, Sequella). Finally, a novel protein/cell wall synthesis inhibitor is under development as part of three drug combination treatments for MDR or XDR TB (Pyrazinamide, Pfizer/TB alliance).

A further four phase II and five phase I candidates are in development for TB, as shown below in Table 1. 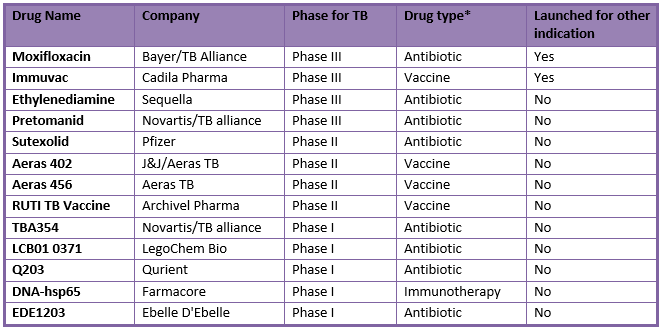 *Table only includes vaccines for therapeutic use not prophylactic vaccines

The only approved TB vaccine, Bacillus Calmette-Guérin (BCG) vaccine, has limited efficacy in adults who form the majority of the TB patient population, so for the short term the primary treatment for TB is likely to remain long regimens of multiple antibiotics. However, there is promise for more diversity in potential antibiotics and therapeutic vaccines, especially those used as second/last line treatment options for drug-resistant TB variants. The provision of effective and affordable therapeutic options is a necessity if the goals of the WHO’s End TB Strategy and Millennium development goals (reducing TB deaths by 90% and new cases by 80% by 2030) are to be achieved. (2)