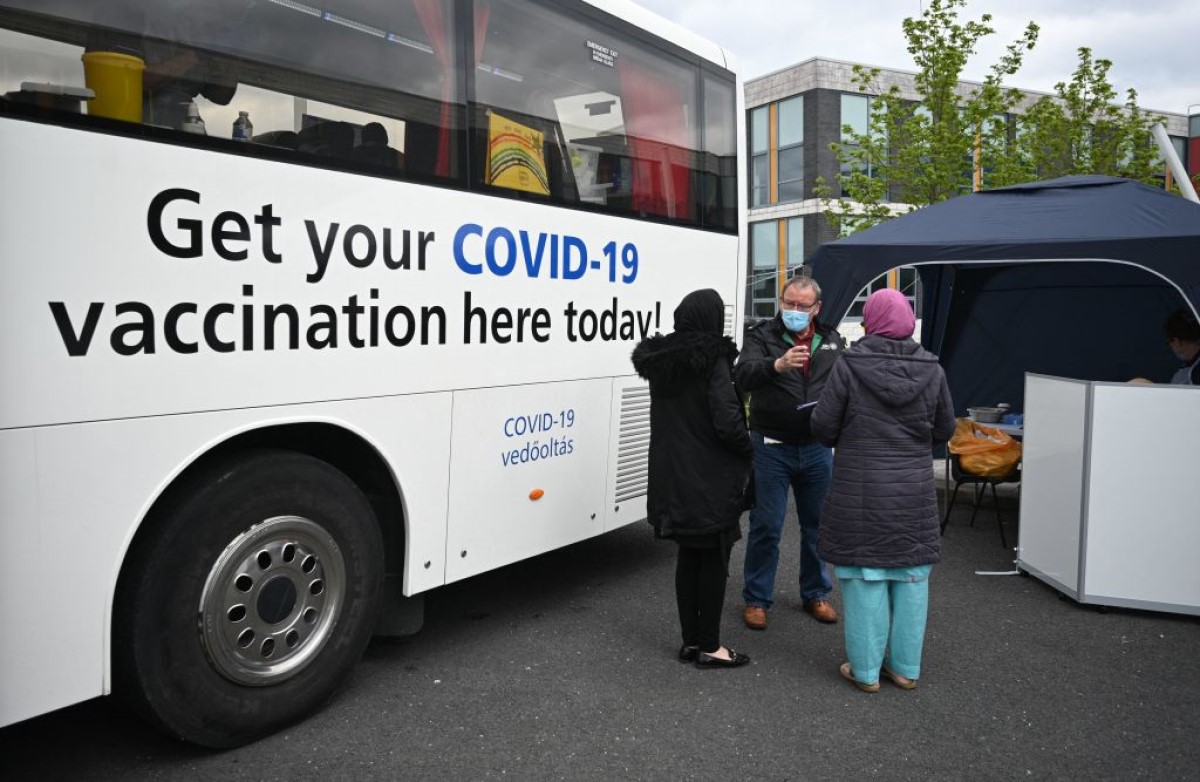 People in Bolton, in north west England have received advanced vaccination to counteract cases of the Indian 'variant of concern'.

A new trial of seven COVID-19 vaccines using a mix-and-match or heterologous approach could help determine which produce the best safety and efficacy results as booster shots.

The Cov-Boost study is being funded by the UK government and led by University Hospital Southampton NHS Foundation Trust and builds on world-leading research already sponsored by the country’s Vaccines Taskforce.

The trial aims to recruit 2,886 volunteers, and will be the first in the world to provide data on the safety and efficacy of range of different vaccines used as third doses following an initial prime and boost dose schedule. The seven COVID-19 vaccines being tested are as follows :

These third doses will be given at least 10 to 12 weeks after a second dose as part of the UK’s ongoing vaccination program.

A heterologous approach is well known in vaccine programs against polio, hepatitis A and B, but has not been studied extensively with COVID-19 vaccines.

The Novavax, Valneva and CureVac COVID-19 vaccines will also be studied in a half-dose formulation in the hope that one or more might prove effective, thereby allowing for double the number of vaccinations to be given using the same vaccine supply. The half-dose approach may also help to minimize reactogenicity, ie, the common side effects of vaccines such as fever or sore arm, while still providing an adequate boost to the immune response.

The first vaccinations will start to take place from early June at 16 locations across the UK, with initial results due by September.

Participants will be monitored for side effects throughout the study and immune responses will be measured at days 28, 84, 308 and 365.

The study will be run by Matthew Snape, associate professor in general pediatrics and vaccinology at the Oxford Vaccine Group, and Saul Faust, professor of pediatric immunology and infectious diseases at the University of Southampton.

The results will help inform decisions by the UK’s Joint Committee on Vaccination and Immunisation (JCVI) on plans for a booster program from the autumn. This could be timed to coincide with the UK’s annual flu season or whenever experts believe a resurgence in Covid-19 infections is most likely.

The threat posed by new variants of SARS-CoV-2, most especially the Indian variant, B.1.617.2, is causing some concern as the UK plans to lift all social distancing restrictions by 21 June.

Questions About Future Of AZ Vaccine

The new trial follows an initial heterologous vaccination study, the Oxford Vaccine Group’s Com-COV trial, which  used the mix-and-match approach to the prime and boost doses: the AstraZeneca vaccine followed by Pfizer/BioNTech’s vaccine or vice versa, over two different dosing schedules, 28 and 84 days.

Initial results from this trial, published in The Lancet on 12 May, showed that mixing the doses increased the frequency of mild-to-moderate symptoms following vaccination by more than 20% in both dose combinations, but there were no serious outcomes and the symptoms were treatable with paracetamol.

The Com-COV study could prove particularly relevant because of concerns about rare but potentially fatal cases of vaccine-induced thrombosis and thrombocytopenia (VITT) seen in the AstraZeneca vaccine and (to a lesser extent) the Janssen vaccine.

This has seen in countries such as Germany, France, Sweden, Norway, and Denmark switch away from the AstraZeneca vaccine. These nations have recommend different vaccines be administered – mostly Pfizer or Moderna – even in those who have received an initial AZ jab.

The main immune response outcomes from the Com-COV trial are expected in June. If an AZ/Pfizer prime-boost combination produces an equivalent or superior efficacy profile, this would provide an evidence-base for the approach, and allow the UK to pursue a similar strategy.

A few updates to the UK’s strategy may point in this direction. Firstly, the JCVI now recommends giving all individuals under 40 an alternative to the AZ jab because of the VITT risk, similar to guidelines in many EU nations, where its use is restricted to over 60s or over 65s.

Secondly, in April the UK government purchased a further 60 million doses of the Pfizer vaccine, but has not yet signed a similar deal with AstraZeneca.

However, it is too early to write off the AstraZeneca/Oxford collaboration. The company’s CEO Pascal Soriot told the Financial Times on 21 May that preclinical studies showed the vaccine's efficacy was only slightly diminished against the Indian variant, and that animal studies showed a new booster had performed well against other variants. Soriot also confirmed the company was in negotiations with the UK and other governments about new contracts for booster doses.

Meanwhile, the Cov-Boost results expected in September will be significant for a number of ‘second-generation’ COVID-19 vaccines, including the as-yet-unapproved late-stage candidates from Valneva, CureVac and Novavax.

These may find themselves crowded out in the primary vaccination market by the growing dominance of the Pfizer/BioNTech and Moderna vaccines, and evidence of their safety in efficacy in booster settings could open up a significant market for these companies.