US FDA's Plan On Right To Try: Big On Congressional Engagement, Short On Policy Details 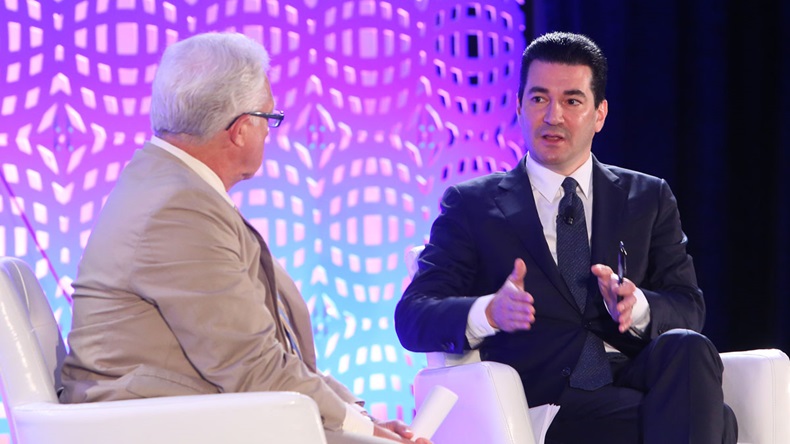 BIO PRESIDENT AND CEO JAMES GREENWOOD HAS A "FIRESIDE CHAT" WITH FDA COMMISSIONER SCOTT GOTTLIEB AT THE 2018 ANNUAL MEETING.

The US FDA’s implementation of the federal right-to-try law will include plenty of outreach to the measure’s congressional backers and opponents, but the substance of the agency’s plan likely will not be clear for several months.

FDA Commissioner Scott Gottlieb told the 2018 BIO International Convention the agency is still figuring out how to implement the Trickett Wendler, Frank Mongiello, Jordan McLinn and Matthew Bellina Right To Try Act, which creates a new route for patients with life-threatening conditions to access investigational medicines directly from the drug’s sponsor without FDA involvement.

FDA has established a cross-agency working group to develop an implementation plan for the law. The group is led by Principal Deputy Commissioner Rachel Sherman and will include representatives from the chief counsel’s office and drug and biologics centers, among others, Gottlieb said.

“It’s very important when we do things we put good process around it and make sure that everyone who has an informed view on this inside the agency is part of that process,” Gottlieb said.

The working group will “try to come up with a list of potential recommendations on things we might do to make sure this is properly implemented,” Gottlieb said. “And by properly implemented, I mean giving both proper advice to sponsors where we have a role to do that, as well as providing proper information to patients, when we’re being looked to for information around this.”

It appears the working group will consider a range of options when it comes to implementation.

“First of all we could do nothing,” Gottlieb said. “We could do something as simple as a Q&A to answer some of the common questions we’re getting. We could issue guidance.”

Industry Looks To FDA For Advice

Signed into law by President Trump on May 30, the right-to-try measure allows a patient with a life-threatening disease or condition who has exhausted approved treatment options and is unable to participate in a clinical trial to work directly with the manufacturer for access to an investigational drug that has completed Phase I studies.

FDA may not use a clinical outcome associated with the use of an investigational drug under right to try to delay or adversely affect the drug’s review or approval unless that outcome is critical to determining the drug’s safety or the sponsor requests use of such outcomes.

An executive from a small company with a drug in late-stage development for advanced pancreatic cancer said he had received 10 calls about access under right to try.

Since the bill's enactment into law, Center for Drug Evaluation and Research staff have been instructed to refer right-to-try questions from patients or physicians about specific products to the drug sponsor. Sponsors who have questions regarding their obligations under the law should be referred to the statute. (Also see "US FDA Right To Try Policy: For Now, Defer Questions To Sponsors, Bill Text" - Pink Sheet, 30 May, 2018.)

However, the agency’s early hands-off advisory approach comes of little help to drug sponsors, particularly smaller companies who already find themselves overwhelmed with requests for investigational drug access under the new law.

At the BIO meeting, Gottlieb was asked about the agency’s view on right to try by an executive of a small company with a drug in late-stage development for advanced pancreatic cancer. The executive said he had already received 10 calls about right to try, “one threatening call,” and had taken his personal phone number off the website. “None of these small companies are prepared,” he said.

“Ultimately right to try is going to be a process that sits alongside compassionate use,” Gottlieb said, referring to the agency’s longstanding mechanism for expanded access. “The decision is going to be up to the sponsor if they want to provide a drug preapproval, whether they have a right-to-try program or they use the conventional process that we’ve had in place and we’re going to be making additional improvements … to make that even more seamless.”

The CEOs of some biotechs already have said they will not grant right-to-try requests.

On the right to-try law, Gottlieb said he hoped to have an announcement on what the agency is “going to affirmatively say in two or three months, but it’s going to take that long for us to work through this. We have to look at do we develop guidance? Do we develop regulations? If we do, what are we trying to solve for? Are there places where there’s ambiguity around terminology where Congress is looking to us to define it better? I just don’t have answers to those questions yet.”

“I’m also going to make sure that we engage Congress, including the proponents of this legislation on the Hill as well as those who raised concerns, to make sure that we’re engaging Congress in this process to fully understand what the intent was with different provisions,” Gottlieb said. “There’s a lot of things in the right-to-try law the way it’s written that map to existing regulations. And so to the extent that it is invoking existing regulations, we need to be sure we’re providing clarity around how to operationalize that.”

Spearheaded by the libertarian Goldwater Institute, the right-to-try law received strong backing from Republican lawmakers, with strong opposition coming from some Democrats and many patient groups. The biopharma industry generally was not supportive of the measure.

FDA also had raised concerns about the various provisions in the bill, although immediately after it passed the House of Representatives on May 22 Gottlieb tweeted that he stands ready to "implement it in a way that achieves Congress' intent to promote access and protect patients and build on FDA's longstanding commitment to these important goals." (Also see "Right-To-Try Bill Heads To White House, Putting Firms In Driver's Seat" - Pink Sheet, 22 May, 2018.)

After the measure was signed into law, Gottlieb said the agency’s implementation “will build on our long-standing efforts to help patients and families who are facing life-threatening diseases or conditions, in a way that seeks to protect their autonomy, their safety, and the safety of others following in their paths."

In a May 31 letter to Gottlieb, Johnson made clear the law was intended to take power away from FDA. He requested a meeting with the commissioner to discuss the agency’s plans to implement the law consistent with that intent.

"This law intends to diminish the FDA’s power over people’s lives, not increase it. It is designed to work within existing FDA regulations, definitions, and approval processes."  – Sen. Ron Johnson

“This legislation is fundamentally about empowering patients to make decisions in cooperation with their doctors and the developers of potentially life-saving therapies,” Johnson wrote. “This law intends to diminish the FDA’s power over people’s lives, not increase it. It is designed to work within existing FDA regulations, definitions, and approval processes. It is not meant to grant FDA more power or enable the FDA to write new guidance, rules, or regulations that would limit the ability of an individual facing a life-threatening disease from accessing treatments.”

Asked after his talk at BIO to comment on Johnson’s remarks, Gottlieb told the Pink Sheet: “I’ve reached out to his office. I’m looking forward to meeting with him and having discussion about his views on the best way for us to move forward. I want to work with him. We’ve committed that to his office already. I’ve had brief discussions with him and I look forward to further discussion with him."

"We’re going to be engaging Capitol Hill on how we think about this," Gottlieb said. "We want to do the right thing here, make sure that we get this right and we’re going to be deliberate about it.”