US Markets for Interventional Cardiology Products

In the United States (U.S.), approximately 85.6 million adults have at least one type of cardiovascular disease (CVD), a broad group of disorders that affect the heart and circulatory system. Cardiovascular disease in all its forms accounts for more deaths than any other major cause in the U.S., including cancer, with one of every three deaths in the country due to CVD and over 2,200 people dying from the disease each day (or an average of one death from CVD every 40 seconds).

Coronary heart disease (CHD), also known as ischemic heart disease, is a form of CVD that is associated with a reduction in blood flow through the vasculature of the heart. Classified under the umbrella of CHD are acute and chronic conditions such as atherosclerosis, angina pectoris, and myocardial infarction (MI). Approximately 15.5 million adults age 20 or older in the U.S. suffer from CHD, which is the single largest cause of death in the U.S. and also is the greatest cause of premature and permanent disability in the labor force (AHA, 2016).

This report will cover: interventional diagnostic and therapeutic products for the treatment of CVD; procedure and market forecasts for the years 2015 to 2020 key market drivers and limiters; estimated revenues and market shares for major U.S. competitors; and, analysis of lead products and emerging products/technologies. 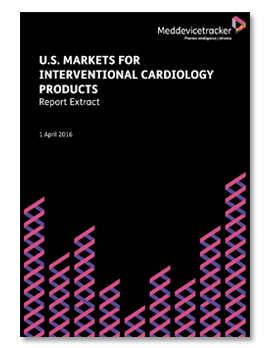 You’ll instantly connect to the latest in global medtech developments with industry news, trends, deals, product developments, opinions, analysis, and context behind the headlines and more – all available at your fingertips.