US overtakes Japan as top spot for regenerative medicines

The U.S. is set to usurp Japan's position as the global leader in regenerative medicine, a burgeoning field involving the creation of living cells to repair or replace human tissue ravaged by disease or genetic defects.

Japan emerged as a leader after scientist Shinya Yamanaka shared the 2012 Nobel Prize in Physiology or Medicine for his work on reprogramming mature cells to become more malleable stem cells, spurring greater interest and investment in regenerative therapies.

Company executives and industry consultants say the U.S. is now edging ahead of Japan thanks in part to a more favorable regulatory framework. At stake is a global marketprojected to reach $380 billion by 2050, according to Japan's Ministry of Economy, Trade and Industry.

The Australia-based company is developing a number of stem cell therapies to treat serious and debilitating conditions such as heart failure, chronic back pain, and bone marrow transplant rejection.

Under the policy framework, a drug is considered a regenerative medicine if it is a cell-based therapy or a therapeutic tissue engineering product; if it is intended to treat, modify, reverse, or cure a serious or life-threatening condition; and there is preclinical evidence to suggest it has the potential to address the unmet medical needs of the condition.

Gene therapies, which lead to cell or tissue modifications, could also meet this definition.

Such products can be designated as Regenerative Medicine Advanced Therapy, or RMAT, and granted fast-track review and developmental support by the U.S. FDA.

"One of the key things that stand out for the FDA is their willingness to work with companies very early on," said Patty Reilly, vice president of intelligence alliances and product unification at Informa Pharma Intelligence.

When it comes to regulation, the U.S. has "hands down the best environment for the pharma industry," said Tatsuhiro Kanou, a spokesperson for Takeda Pharmaceutical Co. Ltd., Japan's largest drug manufacturer.

"If some new technology is developed, there is speed and flexibility in supporting it in the legal and regulatory framework. So this allows the research to move forward," Kanou said, adding that this environment is not yet in place in Japan.

Across the Pacific, Japan's approval pathway for regenerative medicines is not very clear-cut.

"As for guidelines, we are a little bit behind [the U.S.]," said Ray Fujii, a partner at global strategy consulting firm L.E.K. Consulting.

In 2014, the country updated its pharmaceutical law to include a definition and a separate category for regenerative medicines.

The government also created the Sakigake fast-track designation, which allows products to gain an accelerated, conditional approval if early clinical data confirms their safety and predicts that they are likely an effective therapy.

However, without clear guidance on how to run clinical trials or meet manufacturing requirements, domestic companies do not know how to take their products forward.

"If I am a regenerative medicine company in Japan, with a program of my own, I will probably focus more on the U.S. market," Fujii said.

Mesoblast is preparing to launch a stem cell product in the U.S. after it showed positive outcomes in a late-stage clinical trial.

With the RMAT designation in the U.S., "you've still got to do robust phase 3 trials, but you can be guided by the FDA in what kind of phase 3 trials, or how best to tailor them to an accelerated approval. That does not exist in Japan," said Mesoblast's Itescu.

The therapy is currently under the U.S. FDA's fast-track review.

"I would say that both countries have their own approaches, but the U.S. has now provided an even more streamlined approach for those therapies," Itescu said.

Meanwhile, stem cell product manufacturers will also need to solve the logistical headaches that come with commercializing their products.

Where to source your cells, how to keep them safe, and how to deliver your product to the patients as soon as it is manufactured are very important issues forregenerative medicines, Hashimoto said, highlighting supply chain differences with conventional drugs.

In the absence of clear guidelines, companies have to establish the minute details along the supply chain themselves, she added.

"We feel like we have to [build] a highway but first we have to do the construction of the highway, then we have to set up a licensing system and also maybe traffic signals and [decide] where to put it. It's really starting from zero."

But Japan is not giving up.

In the face of increased competition, the country in 2017 allocated ¥14.7 billion— almost 12% of its budget for medical research — towards regenerative medicine.

The domestic regenerative medicine market is expected to grow from $950 million in 2020, to $25 billion by 2050, according to Japan's Ministry of Economy, Trade and Industry. In comparison, the global market is projected to reach $380 billion by 2050.

Japan is also the place where induced pluripotent stem, or iPS, cells — the crown jewel of Yamanaka's scientific research — were invented.

Discovered in 2006, iPS cells are created by reprogramming a mature cell — such as an adult skin cell — to return to an embryonic-like state. After returning to this state, it can differentiate into any cell type, making it useful for regenerating tissue that has been damaged. 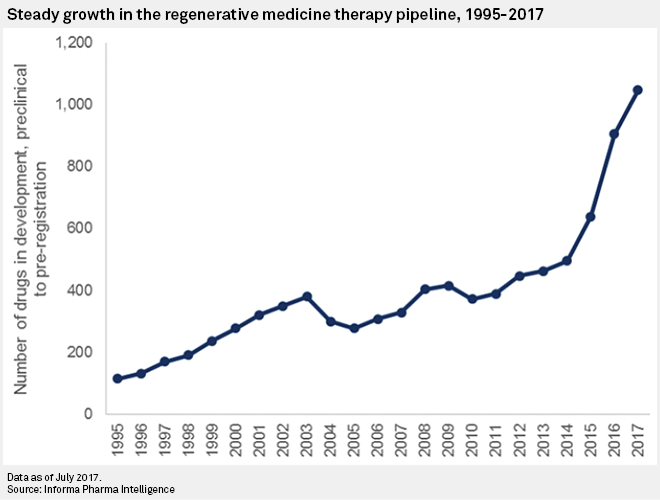 Yamanaka's breakthrough solved the ethical problems surrounding stem cell research in the early 2000s, and boosted commercial development as human eggs would not have to be used or destroyed in the process.

Though it's been more than a decade since the discovery, interest from Japan's domestic drugmakers continues.

Meanwhile, the country's biggest pharma company is looking at ways to strengthen its own presence in the regenerative medicine sector.

The drugmaker has also been collaborating with Yamanaka at Kyoto University's Center for iPS Cell Research Application since 2015. The joint program, called T-CiRA, aims to develop innovative iPS cell therapies for various diseases.

"We are doing this because [our CEO] Christophe Weber personally believes in the vision of Yamanaka and because the research is based in and was born in Japan. So through the mechanism of T-CiRA we want to launch superlative regenerative therapies from Japan," Takeda's Kanou said.

Despite the current regulatory challenges in Japan, the country boasts top-class researchers in the field of iPS cells, he said.

"Japan is already vying for the top position in this research with the U.S,"Kanou said. "If its regulatory environment becomes more flexible, Japan has a chance to take a lead that other countries will not be able to catch."