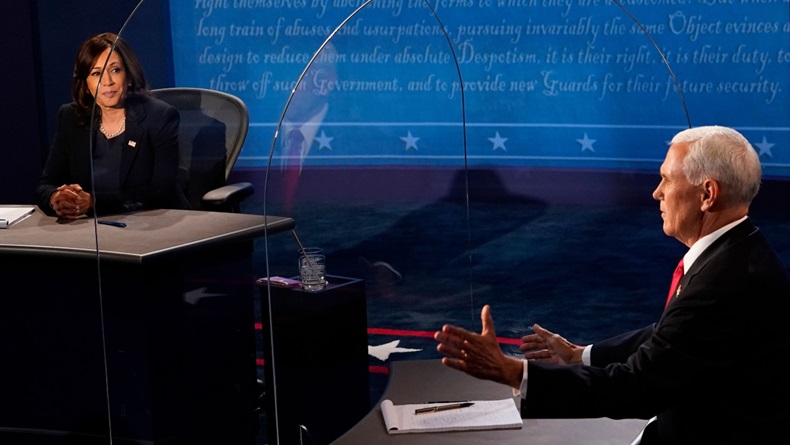 The Japanese martial art Jujutsu is characterized by techniques that attempt to turn an opponent’s moves back in on themselves, not so much using your own force but getting your opponent to attack themselves. School children engaged in a verbal form of this can sometimes be heard to say “I’m rubber, you’re glue, whatever you say bounces off of me and sticks to you.”

However one wants to describe it, US VP Mike Pence employed the technique pretty adeptly during the Vice Presidential debate on 7 October, using the administration’s arguably weak hand on the issue of whether it was politicizing the development of a COVID vaccine and trying to make it seem like the Democrats were the ones stirring up trouble for scientists and sponsors.

Discussion of vaccine politization, the only Rx-specific issue that came up during the debate, began when the moderator, US Today’s Susan Page, asked the Democratic VP nominee, California Sen. Kamala Harris, “For life to get back to normal, Dr. Anthony Fauci and other experts say that most of the people who can be vaccinated need to be vaccinated. But half of Americans now say they wouldn't take a vaccine if it was released now. If the Trump administration approves the vaccine before or after the election, should Americans take it? And would you take it?

The question was similar to one that Joe Biden got during the raucous 29 September presidential debate when moderator Chris Wallace asked him whether his statements that the public could trust the scientists but not Trump were contributing to fear about vaccine reliability. (Also see "'Like Water': Pharma Avoids Much Scrutiny In Messy Presidential Debate" - Pink Sheet, 29 Sep, 2020.)

Page attempted to move on, asking Pence, given President Trump’s age, whether he’d discussed “safeguards or procedures when it comes to a specific presidential disability.”

The Vice President said, “I would like to go back, because the reality is that we're going to have a vaccine, senator, in record time, in unheard of time, in less than a year. We have five companies in Phase III clinical trials. And we're right now producing tens of millions of doses. So the fact that you continue to undermine public confidence in a vaccine, if the vaccine emerges during the Trump administration, I think is unconscionable.”

Harris declined to engage further on vaccines, but didn’t exactly answer Page’s question either when asked if she had developed a plan with Joe Biden about potential presidential infirmary.

The jujutsu dynamics were also on display during a recent House hearing where Democrats sought reassurance that the coronavirus vaccine development and approval process could rise above efforts to politicize it, and Republicans criticized them for giving the issue a prominent stage.

Several public health experts told the House Energy and Commerce Committee’s Oversight and Investigations Subcommittee on 30 September that the process is solid and interference for political gain would be highly difficult. However, they worried that the same political attacks on the US Food and Drug Administration, Centers for Disease Control and Prevention and other public health agencies are eroding public confidence in any potential vaccine that could be approved.

At the same time, some Republican subcommittee members criticized Democrats for raising the issue, arguing that discussing the politicization of the vaccine approval process politicizes the process.

Rep. Markwayne Mullin, R-OK, and others said the hearing is lending the idea credibility and may further erode confidence in a vaccine.

“The more we question it underneath the disguise of trying to say we’re trying to keep the American people safe, the more we could actually cost people [their] lives and we need to be very, very careful about that,” Mullin said.

Mullin and colleagues may have a point. In a time when conspiracy theories can gain traction quickly thanks to social media, traditional media outlets have to be careful not to legitimize or normalize the often-disproved statements when reporting about their supporters.

Subcommittee Chair Diana DeGette, D-CO, argued that transparency is helpful and hearings with experts explaining the system reduces the likelihood that someone will attempt to interfere with it.

Former FDA Commissioner Mark McClellan, now the director of the Duke-Margolis Center for Health Policy, told the subcommittee that the approval process remains solid despite the political attacks and that he remains confident that the FDA career staff will let science drive decisions.

McClellan suggested the process’ transparency helps ensure its integrity. He said the FDA will be releasing public documents about each vaccine candidate before a decision is made, offering the public a view of the data submitted and risk-benefit calculation. In addition, multiple advisory groups will conduct independent reviews of the same information and offer their conclusions.

“This is a major process with a lot of regulatory oversight, all of this independent scientific engagement by advisory bodies, actions including enrolling and conducting large clinical trials by multiple companies,” McClellan said. “This is not an easy process to disrupt just because somebody says something about it.”

In addition, once a vaccine is approved, the CDC’s Advisory Committee on Immunization Practices will review the data on each vaccine and determine which groups should receive it. (Also see "Vaccine Hesitancy May Drive Distribution Priorities For Early COVID-19 Supply" - Pink Sheet, 22 Sep, 2020.)

Federal officials also must consider their words carefully, Ashish Jha, dean of the Brown University School of Public Health, said during the hearing. FDA Commissioner Stephen Hahn’s statement that the agency does not have to follow the VRBPAC recommendations may be correct, Jha said, but also sows doubt about political interference.

“What I would like is much greater clarity that the scientists will get to really drive this process, that the FDA chief won’t override the advisory committee’s recommendations,” he said.

Among Trump’s favorite, and more worrisome, statements is that a vaccine could be approved by Election Day. Since the EUA guidance debacle he's acknowledged that's not going to happen, but Jha said political leaders should stop discussing potential approval dates because they are not definitive and stoke fears about the product becoming available too quickly.

“The problem is that when I speak to people working on the clinical trials, they can’t give me a day,” Jha said. “We’ve got to let the science play that process out.”

McClellan also said that announcements that states could conduct another review once the FDA approves a vaccine also may hurt public confidence, un doubtedly a reference to Democratic New York Gov. Andrew Cuomo, who recently announced that an independent state taskforce would review safety and efficacy of all coronavirus vaccines that are made available because he did not trust the federal government’s opinion. (Also see "New York State To Conduct Its Own Review Of COVID-19 Vaccines In Another Blow To FDA’s Reputation" - Pink Sheet, 24 Sep, 2020.)

“It is hard to see what a state body of some kind could add to that,” McClellan said. “It’s hard to see how to replicate anything like this national gold standard system that we’ve developed.”