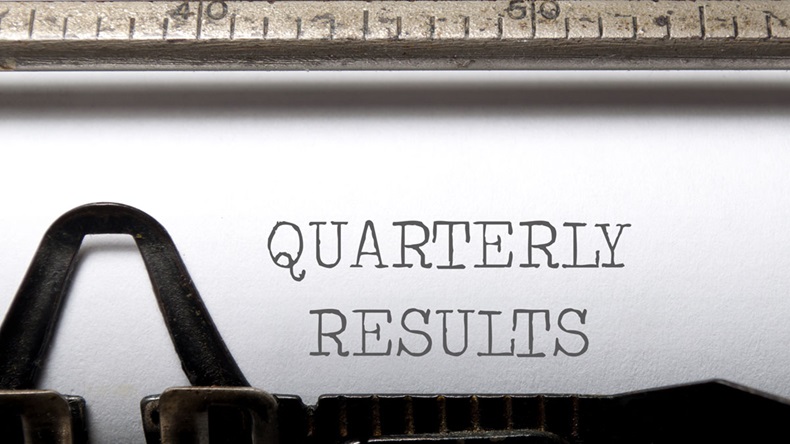 Regulatory issues on both sides of the Atlantic held back growth at Sanofi’s Consumer Healthcare business in the third quarter as sales edged up by 0.4% at constant exchange rates to €1.14bn ($1.27bn).

US turnover fell by 4.4% to €252m in the three months as Sanofi began to feel the effects of a Food and Drug Administration investigation into contamination of ranitidine-containing drugs with a nitrosamine impurity, NDMA. (Also see "Contamination In Common OTC Antacid Adds To FDA's API Impurity Concerns" - HBW Insight, 15 Sep, 2019.)

In September, the agency identified low levels of NDMA in ranitidine drugs, including some of Sanofi’s OTC Zantac products, prompting the firm one month later to issue a voluntary recall of the range in the country and in Canada. (Also see "OTC Zantac Recall: Sanofi Heeds To Potential Ranitidine Contaminant" - HBW Insight, 18 Oct, 2019.)

At the time, a Sanofi representative said the firm had opted for a recall "as a precautionary measure due to inconsistencies in preliminary test results of the active ingredient used in the US and Canadian products."

As a result of the recall, Zantac sales slumped by 58.1% to €14m in the third quarter, with Sanofi noting the reported sales figure reflected a “provision for returns.” 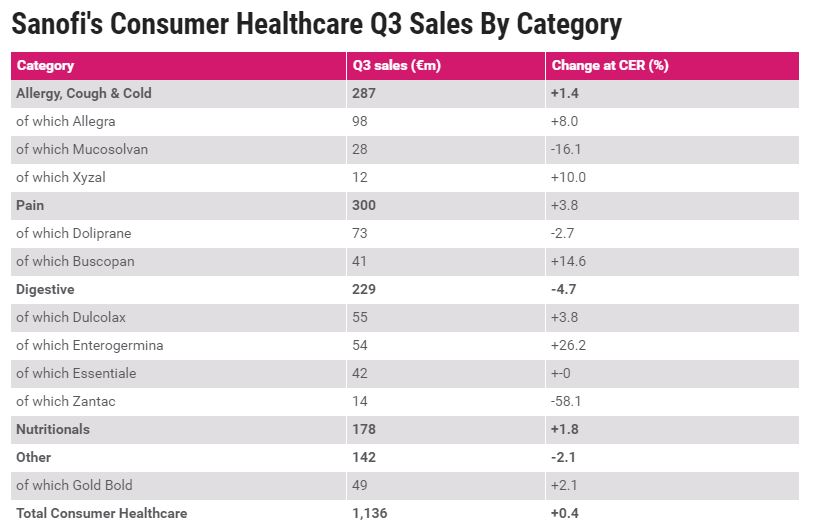 Compounded by EU Troubles
While Sanofi’s European business was unaffected in Q3 by the ranitidine contamination issue – as the OTC rights to distribute Zantac are held by GlaxoSmithKline PLC – “strengthening regulatory requirements” in the region were blamed by the firm for a 7.0% drop in Consumer Healthcare sales.

Detailing the regulatory issues which had caused turnover in Europe to slip to €306m, a spokesperson for Sanofi told HBW Insight that revised ICH guidelines resulted in the need to update or withdraw formulations (or APIs) for some products marketed in the region.

Sanofi is facing an increasingly challenging regulatory environment in France, with ANSM tightening oversight of OTC products in the name of patient safety.

ANSM is pushing for standardized packaging for non-prescription drugs and wants to put an end to umbrella branding. (Also see "French Industry Loses Appeal Against Standardized OTC Packaging And Curb On Branding" - HBW Insight, 28 Oct, 2019.) Furthermore, the regulator recently decreed all paracetamol-containing products must carry prominent liver damage warnings from next year and is weighing up moving the drug, along with ibuprofen and acetylsalicylic acid, behind pharmacy counters to put an end to self-selection.  (Also see "France Orders On-Pack Warnings For Paracetamol Over Liver Damage Fears" - HBW Insight, 10 Jul, 2019.)  (Also see "France Wants To Move Paracetamol, Ibuprofen And Aspirin Behind The Counter" - HBW Insight, 4 Oct, 2019.)

Such a move would undoubtedly have a significant impact on Sanofi’s market-leading paracetamol brand Doliprane, which posted sales down by 2.7% to €73m in the third quarter.

The spokesperson noted that “lower market growth” in France in the three months had compounded the challenges the firm was facing in the country.

Germany Adds To Problems
In addition to the regulatory issues, Sanofi said turnover in Europe had also been held back by the impact of brand divestments and stock adjustments following a poor cough & cold season in Germany.

The Mucosolvan cough brand was particularly affected as sales of the range fell by 16.1% to €28m in the three months. On top of the weak season, the firm has been facing a number of issues related to the product range in Germany.

At the start of the year Sanofi was forced to withdraw its herbal cough syrup Mucosolvan Phyto Complete from the German market. According to pharmacy magazine DAZ.online, the firm sent a letter to pharmacists explaining that it had been prohibited from selling the product by the country’s competition authority.

In response to a request for further information from the magazine, Sanofi said that it could not provide any further information “during ongoing legal disputes,” adding that it did not at that time want to “speculate about the outcome of the dispute.”

Better News From Emerging Markets
While regulatory troubles shackled the firm in Europe and the US, Sanofi’s biggest Consumer Healthcare reporting region, Emerging Markets, posted Q3 sales up by 7.3% to €414m. The firm attributed the high single-digit rise in turnover to a strong performance in Latin America.

Sanofi has been investing to grow its Latin American operation over recent months. In the first quarter of the year the firm joined forces with Colombia-based e-commerce start-up Rappi to create a partnership which Sanofi claimed at the time would “transform” healthcare across the region. (Also see "Sanofi Partners With Colombian Tech Firm Rappi To 'Transform' Healthcare In Latin America" - HBW Insight, 25 Mar, 2019.)

Through the deal, Rappi – which offers a delivery service for products sold via its app to consumers in seven markets – will promote, sell and deliver Sanofi’s OTC drugs and dietary supplements across Latin America. According to the firms, the tie-up will improve consumers’ “access to health solutions and services” in Argentina, Brazil, Chile, Colombia, Mexico, Peru and Uruguay.

Turning to Consumer Healthcare’s third-quarter earnings, the firm posted operating income down 1.9% to €363m as cost of sales increased.

New CEO Remains Tight-Lipped
During the third quarter Sanofi saw a leadership change at the top of the company with Paul Hudson replacing Olivier Brandicourt as group CEO on 1 September.

Asked by analysts about his plans for the Consumer Healthcare business, Hudson said he was still “getting up to speed” and building a “deeper understanding” of the operation.

“We're spending time as a team looking at where our opportunities are,” Hudson explained, noting that he would reveal more details about his plans for the business at an investor day in December.

Speaking to Bloomberg in September, Hudson said he would closely examine how Consumer Healthcare fitted within the wider company. “The external environment is changing quite quickly so we have to decide who the best owner is,” he said, hinting at the recently launched JV between GSK and Pfizer which will be the outright market leader with a share of 7.3%. (Also see "Sanofi Offloads Two German OTC Brands, New CEO Prepares To Make Mark" - HBW Insight, 4 Sep, 2019.)