What is new for refractory asthma therapies?

What is new for refractory asthma therapies?

The past year has seen the approval of the first biologic drugs for the treatment of severe eosinophilic asthma, the anti-IL5 antibodies Cinquar (Teva) and Nucala (GlaxoSmithKline, GSK). When clinical development of biologics for severe, treatment refractory forms of asthma was examined in a white paper last year , we profiled how the recent definition of severe asthma phenotypes, together with appropriate study designs and biomarkers, had allowed these programs to progress to fruition.

Trialtrove created a new patient segment, Eosinophilic asthma (EoA), as an enhancement to enable identification of trials enrolling EoA patients, defined by >1%–3% (or >2%) sputum eosinophils or elevated blood eosinophil levels (> or = 300/microliter). This granular patient segmentation also facilitates comparisons to other programs, for example, those evaluating treatments for other forms of severe persistent asthma. This analysis examines Trialtrove data from the current programs in EoA, contrasting these with programs targeting severe asthma patients whose phenotypes (non-EoA) are not so well defined. By revisiting these programs, we can gain insights into what is new for treatment of the most refractory asthma populations.

Of the 88 total EoA trials captured in Trialtrove as of November 2016, there are 28 active (planned or ongoing), phase II – III, industry sponsored trials (Figure 1). The trial counts of the primary drugs’ mechanisms of action (MOAs) illustrate how IL5 pathway antagonists still dominate this segment. In addition to the 8 ongoing trials for Nucala and Cinquar, there are pivotal and phase II trials for AstraZeneca’s (AZ) anti-IL5 receptor antibody, benralizumab. The familiar MOAs, IgE inhibitor and inhaled corticosteroid/long-acting beta 2 agonist (ICS/LABA), are still being studied in a few trials for the approved drugs, Novartis’ Xolair and Mundipharma’s branded generic fluticasone/formoterol. Some of the novel, pipeline status drug MOAs, observed from this data, are discussed later in the blog. 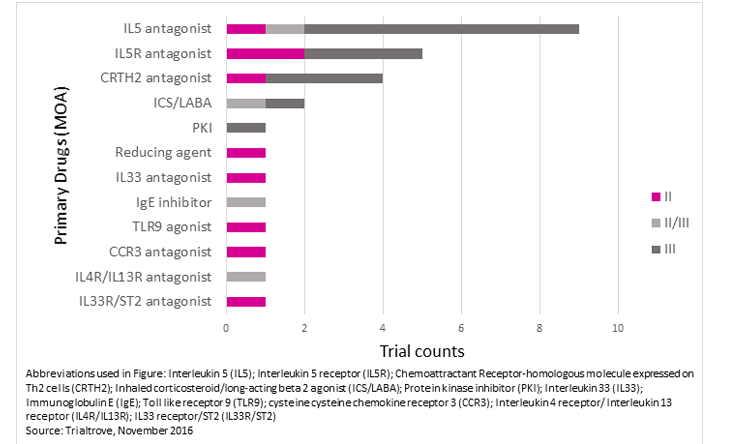 A similar analysis for severe, non-EoA is shown in Figure 2. For this population, the majority of trials are for several pipeline drugs, including IL13 and IL4R/13R antagonists and the fixed-dose combination (FDC) of ICS, LABA and long-acting muscarinic antagonist (LAMA). Already approved MOAs are included in planned studies for this population, including the IL5 antagonists, Cinquar and Nucala, which have phase II trials to fulfill pediatric study requirements for the EMA and FDA. 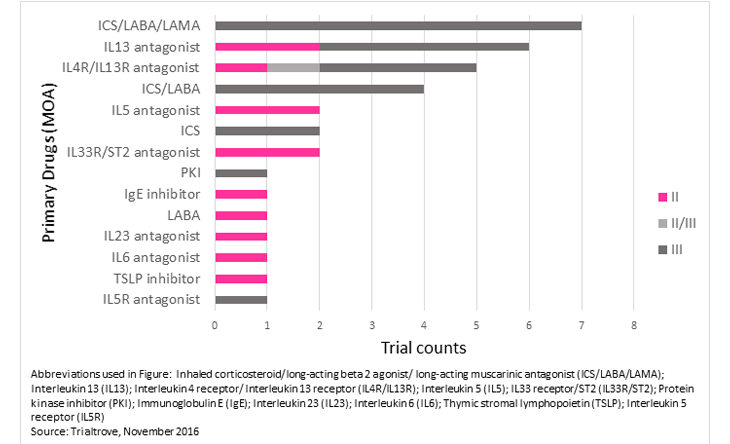 Table 1 provides details for the pipeline drugs with novel MOAs that have reached phase II – III and illustrates how some MOAs are either exclusively in active trials for EoA or severe, non-EoA, while others are being evaluated for both subtypes (highlighted cells). For EoA, the unique MOAs are TLR9 agonist, CCR3 and IL33 antagonists, and all are now at phase II. For non-EoA, anti-IL13 and various triple ICS/LABA/LAMA programs are in phase III trials for this subtype only. At phase II, several MOAs are unique to severe, non-EoA: IL6, IL23 and TSLP antagonists/inhibitors. Straddling the line between the two asthma subtypes are biologics targeting the IL4R/IL13R pathway and the IL5R antagonist, plus a PKI. In addition, two CRTH2 antagonists have reached phase III in EoA. Novartis’ CRTH2 antagonist, fevipiprant, has met primary endpoints in completed phase II trials in severe, non-EoA, suggesting it could advance to phase III in that subtype, as well. In addition, antagonists of the IL33R/ST2 pathway are novel phase II biologics entering the arena for both subtypes.

Most of these programs (12 of 17) are backed by top 20 industry sponsors, as defined by a company’s revenue. For example, heavy investment by Novartis and GSK in triple FDCs for severe, non-EoA patients is reflected by their pivotal trials/programs that each enroll >2,200 patients. Novartis’ fevipiprant will be the first oral drug evaluating a novel MOA to complete pivotal EoA trials, currently projected for H2 2018. The most advanced biologics in development are Regeneron/Sanofi’s dupilumab and AZ’s benralizumab, which are on track to read out pivotal trials in H2 2017. Multiple phase II biologics targeting novel MOAs are in development by top 20 industry sponsors GSK, Roche, AZ, and Boehringer Ingelheim, as well.

A few phase III programs are being run by smaller companies, such as, Apotic, Eleventa, Oxagen for their shared asset, the CRTH2 antagonist (ODC-9101), and AB Science for their PKI (masitinib), which is being evaluated in single trials across multiple indications, including some beyond the respiratory indications (data not shown). Chiesi’s beclometasone/formoterol/glycopyrrolate FDC is keeping pace with the large Novartis and GSK phase III programs in severe, non-EoA. All triple FDC programs are still enrolling and projected to complete in 2018. Immune Pharma licensed AZ’s chemokine CCR3 antagonist, bertilimumab, for development in EoA, a plan that was first discussed several years ago, and is still pending. The Anaptys Bio anti-IL33 program (ANB020) has filed INDs for approval to run phase II trials for EoA in the UK and the USA. 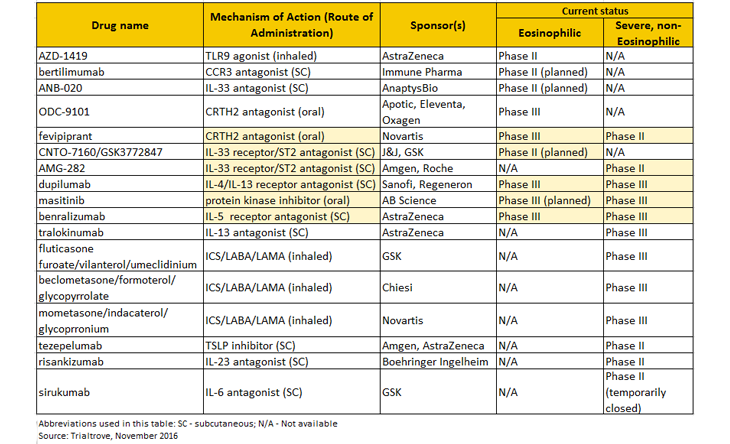 The small percentage of refractory asthma patients draw considerable investment from both large and small pharma who are developing drugs with novel and proven MOAs. Comparing current later stage programs for these populations reveals some overlap in the MOAs under investigation, such as a continued interest in targeting Th2 type cytokine pathways with biologics. We won’t have long to wait for the results from these biologics, since their programs are due to read out pivotal studies in 2017. Longer timelines (late 2018) are projected for all triple FDC programs in severe, non-EoA to complete. It will be interesting to see whether the triple FDCs can improve asthma symptoms in this subtype that historically has not responded fully to ICS. The novel MOAs in phase II status will remain unproven for several years to come, but by employing the new Trialtrove EoA patient segment, it will be easy to track trends for this population into the future.